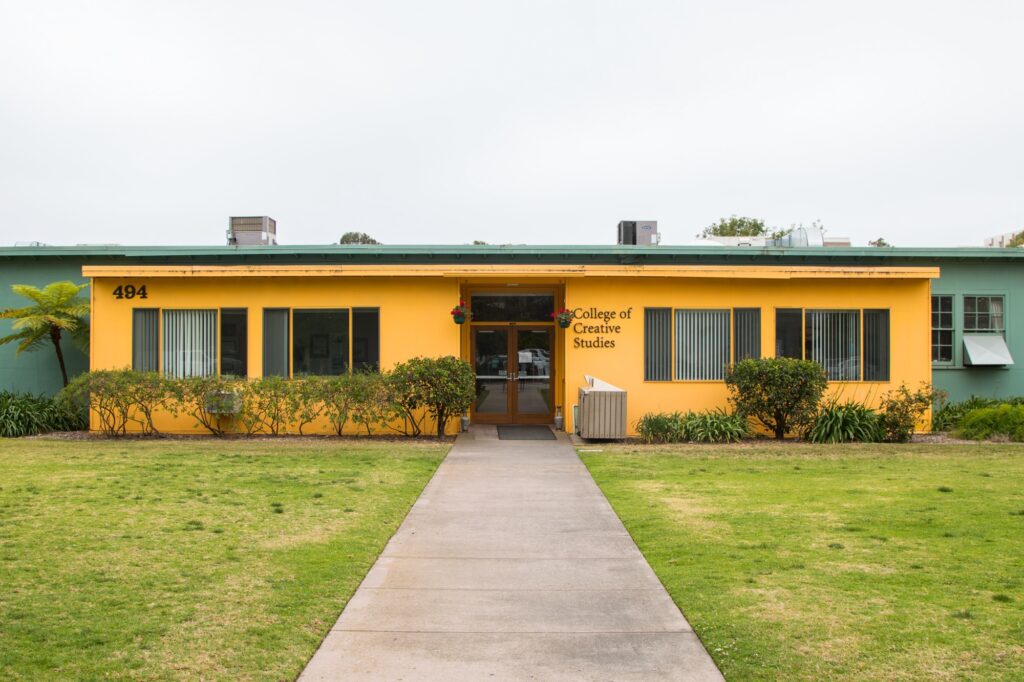 Classes within CCS do not contribute to students’ GPAs; instead, students are awarded a varying number of units depending on their academic performance in each course. Spencer Brandt / Daily Nexus

Tucked away near the main entrance of the Santa Rosa residence hall lies a small yet quirky building. A bright mustard yellow, this one-story structure houses the elusive College of Creative Studies (CCS).

With about 350 students in the entire college, CCS reflects a very small but unique percentage of UCSB undergraduates.

Though one of only three colleges here at UCSB, CCS is the most abstract in terms of research and academics. Students within this program only need eight general education (GE) requirements for their major, can drop a class up until the day before a final and do not receive grades for classes taken within the College of Creative Studies.

“Because you know you’re not taking it for a grade, you’re generally interested in the class,” Kosviner said. “There’s no great benefit to you other than to learn.”

Students are awarded units based on their academic performance, ranging from zero to six units depending on the quality of their assignments, participation and attendance.

Although CCS students rely on L&S courses to create their GPA, CCS is a rigorous and research-oriented program. Tengiz Bibilashvili, professor and advisor for the CCS physics major, explains that the introductory class for physics contains multiple elements of upper-division classes.

He adds that many juniors take graduate-level classes and start research during their freshman and sophomore years.

“They must be people who love science, who love physics, who just don’t count the time they spend solving problems,” he said.

“More than anything, it lets you dedicate all of your time on your own discipline,” Stark said.

Some CCS students say they encounter misconceptions of elitism, competitiveness and lack of structure regarding CCS among their peers. Emma Horanic, first-year CCS biology major, said she worries that CCS students are assumed to have an easier route to academic success.

Horanic noted that although CCS students have more opportunities for individual attention, they are not handed connections for research and projects.

“You have to put in the effort to make that connection; advisors don’t automatically do it for you,” Horanic said.

While the CCS students have much more freedom in choosing classes tailored specifically to their interests, they also have additional guidance in planning schedules and identifying career goals. Each student is assigned an advisor who is also a researcher or professor in their area of interest.

Gabby Najm, second-year CCS biology major, is graduating at the end of next year and seeks to pursue fieldwork. Najm said she feels very supported in this program by professors.

“They just want you to succeed to the best of your ability, and they know you have it in you to do well,” Najm said.

In terms of academic preparation, Bibilashvili said that, for undergraduates, research depends more on one’s skillset rather than on one’s college enrollment.

“Professors don’t care what label is on your jacket, CCS or [Letters & Science]. It doesn’t matter,” Bibilashvili said. “If you are prepared in research, they will take you.”

A version of this story appeared on p.3 of the Thursday, May 19, 2016 print edition of the Daily Nexus.