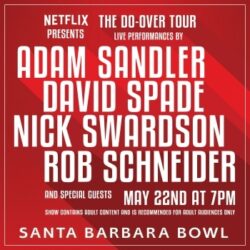 Pondering the countless joys of middle school elicits thoughts of Axe body spray, Motorola Razrs, T-Pain music and the discovery of Adam Sandler comedies. Fortunately, the greater Santa Barbara area now has a chance to relive one of these many lost treasures. On May 22 at the Santa Barbara Bowl, revel as your sixth grade heroes grasp for relevance once again. The cultural icons that are Adam Sandler, David Spade, Nick Swardson and Rob Schneider are teaming up with Netflix for a comedy show to promote their new film, The Do-Over.

Despite all having worked together in pairs or trios on a variety of movies, the only one in which all four have had a role is the recent Netflix exclusive, The Ridiculous 6.” The flick was not exactly received glamorously by the public, but this should not allow fans to forget the comic triumphs that eternalized these men. Let us not forget the Sandler classics that include, but are definitely not limited to, “Happy Gilmore,” “Anger Management” or “50 First Dates.” Let us remember David Spade as the dynamic Emperor Cuzco, the changed, humbled llama of a leader that humorously lent an empathetic lesson to children. Let us dispel the disgracefully fabricated roles of a carrot and a stapler that have marred Rob Schneider’s legacy and remember him for his more highbrow portrayals of “The Hot Chick” or “Deuce Bigalow: Male Gigalo.” Let us not remember any of these men as the washed up, cheap laugh goofs the liberal media machine wants them to be, but instead as the slapstick comedy troupe your younger, happier self remembers them as. It’s safe to say that after years of facing down adversity from critics and viewers alike, the ensemble will stick to their guns … provided the guns propel a boxing glove into Adam Sandler’s crotch.

No matter your thoughts on these comedians, the show might be your last chance to see this full comedy dynasty live, though it will live on over time (perhaps in infamy, perhaps not). The Santa Barbara performance will be the second leg of the tour, so it will still be fresh while slightly rehearsed, not that such veterans need the practice. Long story short — come. You know it will be fun, and even those of you who are there to laugh ironically are sure to be knee-slapped by a few good one-liners.