The Daily Nexus
Music
María del Pilar Shares Truth in Song at MCC
May 17, 2016 at 4:39 pm by Antonio Morales 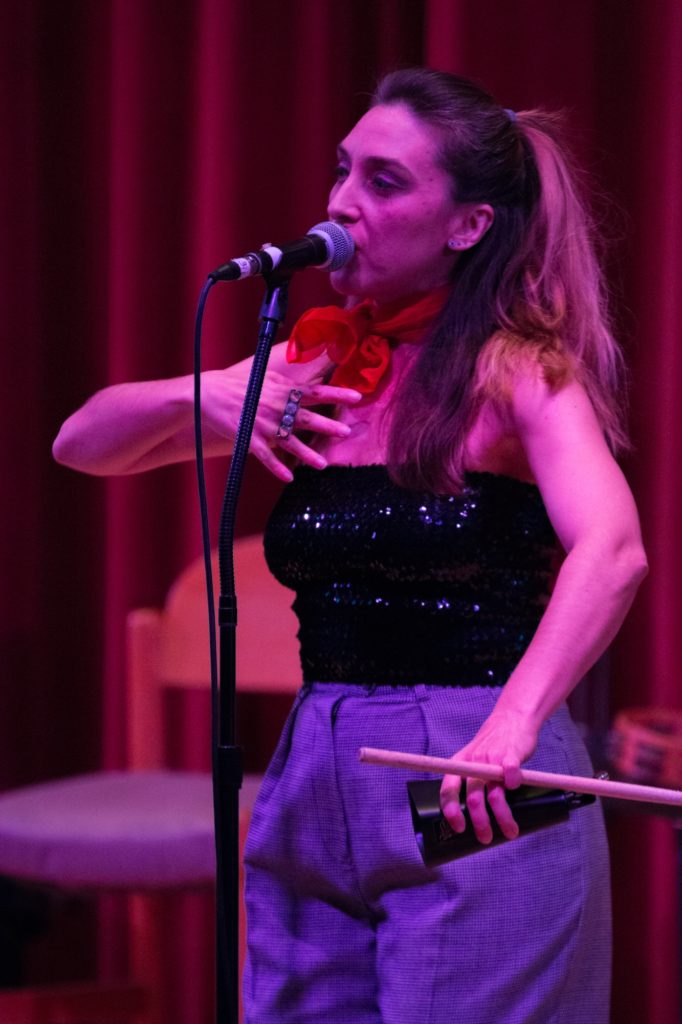 “Stick to who you are no matter what,” stated the beautiful María del Pilar near the end to her energetic concert in the MultiCultural Center at UCSB on Friday, May 13. Throughout del Pilar’s performance it was clear that embracing who she is a motto that she lives by.

Just about every seat in the building was taken and the crowd was filled with a variety of people. It was a fusion of cultures; the conversations that went on in the venue were in several different languages. People were anxious and a few minutes had already passed by after the scheduled start time. Despite the slight delay, the performer did not waste any time in delivering her eclectic sounds. Immediately after taking the stage, del Pilar took control and made the building a place full of energy. Her first song was intense. The way she sang was so passionate that it caught the crowd off guard.

“Tu y yo bailamos, con mucho vigor (You and I dance vigorously).” the intimate words rolled off of her tongue smoothly as she strummed the strings of her ukulele. The passion from her high-pitched vocals resonated throughout the room. Del Pilar’s fluorescent vocals were also accompanied by some amazing electric guitar accompaniment. The guitarist’s solos were intricate and very well done. The riffs vibrated throughout the room and created a powerful and alternative aesthetic. All the sounds going on meshed together perfectly and created a pretty and melodic vibe within the small venue.

After just about each one of the songs she performed, del Pilar shared some insight about her life with the crowd. She spoke about the bicultural influence that has inspired her to bring about this English and Spanish blend.

“I started off with a band called ‘Los Abandoned,’” del Pilar shared. “We started somewhat of a Spanglish scene in Los Angeles. I just thought I should share with you all some of my back story since you may be wondering why I am dressed the way I am.”

Del Pilar, embracing her roots, danced on stage wearing high-waisted pants and a large flower around her neck. Her energy rubbed off on the audience, and people were either standing and dancing — which del Pilar highly encouraged — or bobbing their heads and tapping their feet. It was evident that the artist has a rebellious soul and that all she wants is to have fun doing what she loves most: sharing her art with others and empowering those who face similar circumstances as hers. She spoke about the obstacles that her father had to overcome in order to provide her with a good life. Her father’s will to strive is what fueled her ambitions to be not only a musical artist but also a role model to others.

“I am still going to do my thing despite anything that comes my way,” del Pilar exclaimed as she began her final song of the night.

The singer finished off her setlist with her song “Quien Eres.”

“This song is about not being afraid of who you are,” she stated. It was [[a]] night of Chilean alternative pop with a hint of young angst. Once the event was over just about everyone in attendance stood in line and waited to pick up a copy of del Pilar’s album Songs+Canciones I. I made sure not to leave without grabbing one for myself.