The Daily Nexus
News
Danny DeVito To Promote Bernie Sanders Tuesday in The Arbor
May 16, 2016 at 9:28 pm by Nicholas Bogel-Burroughs 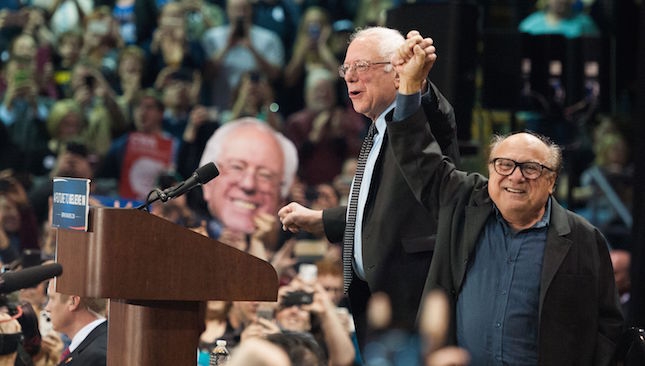 Danny DeVito, who endorsed Bernie Sanders at a St. Louis rally in March, will be at UCSB monday to promote Sanders’s run. Michael B. Thomas / AFP / Getty Images

Actor and director Danny DeVito will be at UC Santa Barbara on Tuesday afternoon, encouraging students to vote for Bernie Sanders in the California Democratic primary.

DeVito will be in The Arbor area of UCSB at 1 p.m., taking pictures with students, signing autographs and discussing why he supports Sen. Sanders (I–Vt.) over former Secretary of State Hillary Clinton for the Democratic presidential nomination. 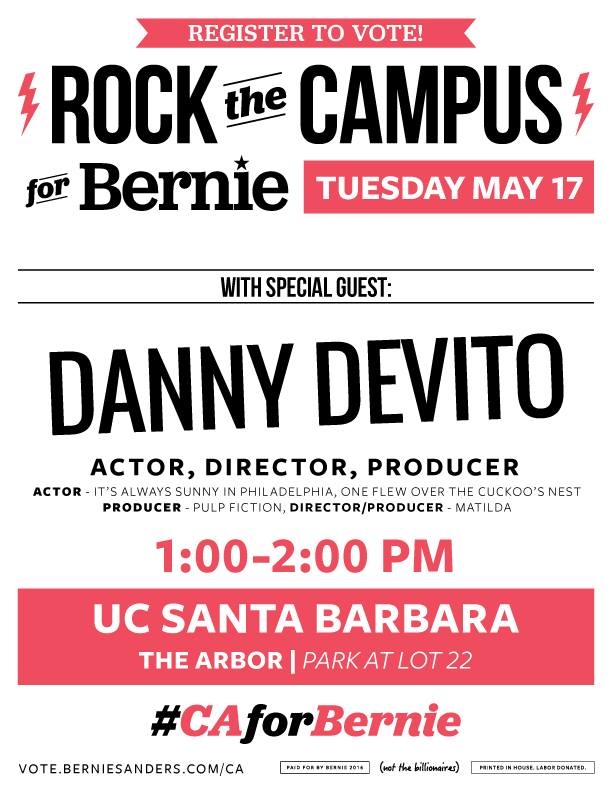 Students will be able to take pictures with DeVito, get his autograph and chat about the Bernie Sanders campaign.

UCSB For Bernie, a student group promoting Sanders’s presidential run, has been working with the candidate’s campaign for several weeks to bring one of Sanders’s celebrity supporters to campus.

“We only got the official confirmation today, which is why we’ve been blasting social media,” said Marisa Jones, second-year psychology major and core organizer for UCSB for Bernie.

UCSB for Bernie did not specifically request DeVito or any other celebrity, but rather informed the Sanders campaign when the organizers would be available to host someone. The group received news Monday of DeVito’s visit from Kyle Butts, a UCSB student who took a leave of absence to work as a field organizer for Sanders.

DeVito, who is famous for his roles in “It’s Always Sunny in Philadelphia,” “One Flew over the Cuckoo’s Nest” and “Taxi,” endorsed Sanders in March, surprising supporters at a St. Louis rally and telling them, “I feel the Bern!”

When UCSB For Bernie organizers found out DeVito was going to visit, they began asking, “When can we tell people?” Jones said, confining their excitement momentarily to a group chat on Facebook.

Organizers said they hope DeVito’s presence will galvanize students in anticipation of the June 7 primary and convince them to register to vote before the May 23 deadline. 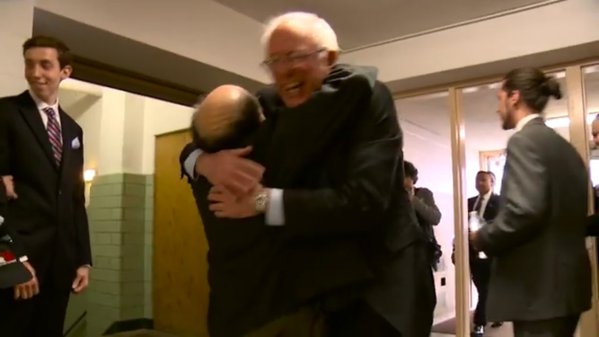 “That’s the great thing about this — [DeVito] is going to be there just chilling in The Arbor and with that, we’re going to be able to get large crowds and make sure everyone’s signed up to vote and remind them of the importance of actually turning out,” said Eric Villalobos, third-year religious studies major and the head organizer for UCSB For Bernie.

“It’d be nice if everyone who came up to him could already say they’re registered to vote,” he added.

Jones said she hopes that DeVito’s informal interactions with students will show them that Sanders’s policies benefit both poor and wealthy people.

“A lot of people think of the issues that Bernie Sanders represents as being issues for poor people and students, but obviously [DeVito] is famous and has money and still supports Bernie Sanders,” Jones said.

I’m burned out. Who cares who celebrities are voting for.

“A lot of people think of the issues that Bernie Sanders represents as being issues for poor people and students, but obviously [DeVito] is famous and has money and still supports Bernie Sanders,” *facepalm*

The girl who said that works with us, she was pretty dumbfounded that was the line they choose to use.

It was totally inappropriate to host this between Girvetz and the Library.