The Daily Nexus
Track and Field
From Rec Runner to Record Holder
May 12, 2016 at 3:45 am by Duncan MacPhee

Many athletes, at some point in their careers, face a crossroads where they must figure out whether they will stick with their beloved sport or give it up in pursuit of other interests.

This decision is never an easy one to make, and it can have huge implications for the athlete’s life and even, in rare instances, for the course of the history of the sport. 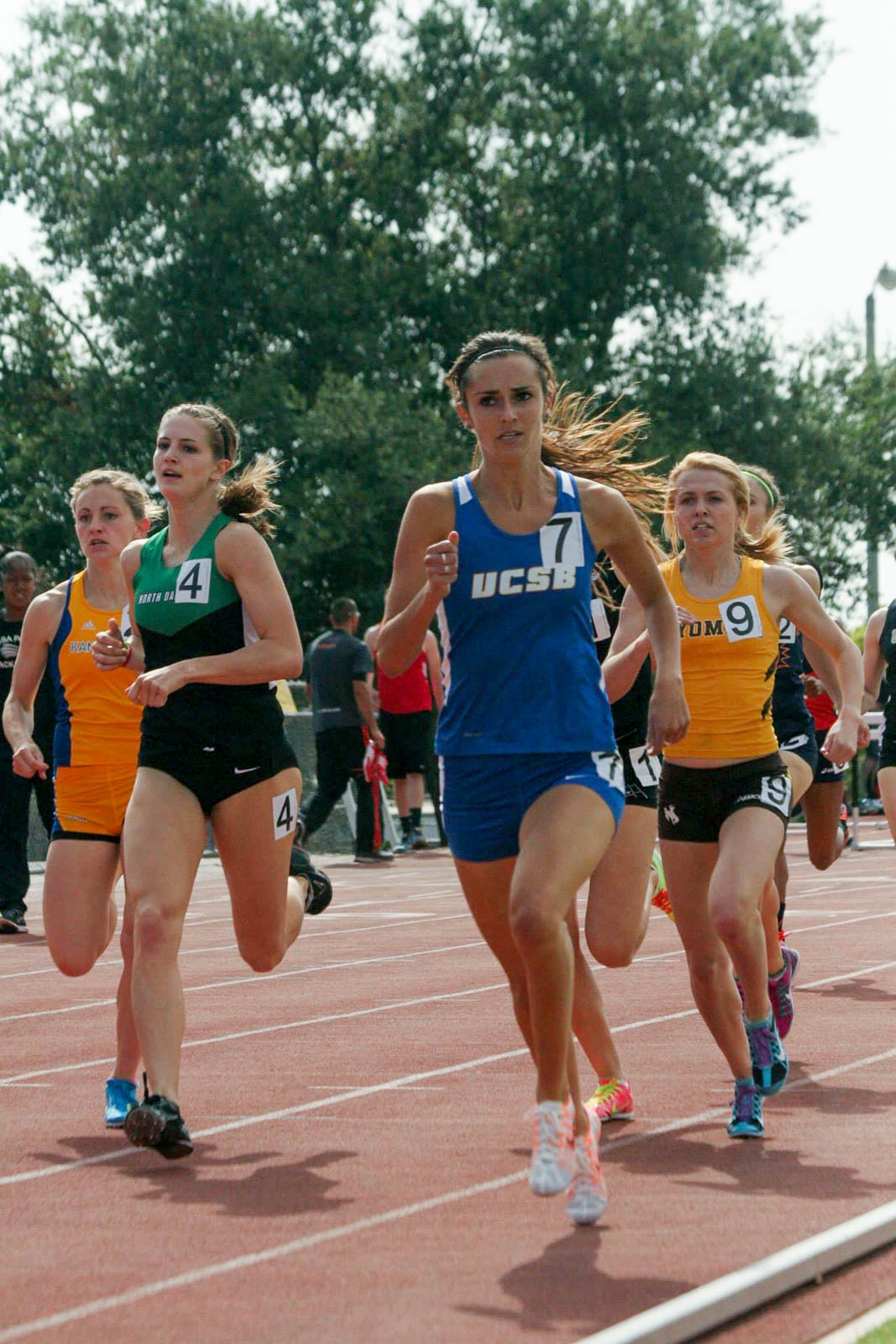 Such is the case in the story of UCSB economics grad student and star distance runner Victoria Tsolis, better known as Tori, who will be the first to tell you that her journey as a track athlete from freshman year of undergrad to now has “been a roller coaster.”

After coming close to giving up on competition altogether before the season of her junior year in 2014, Tsolis revitalized her track career in the blink of an eye, and has now come back just two years later to rewrite the Gauchos’ record books in her favorite event, the 1500m. And she’s not done yet.

Tori came into the UCSB track program five years ago as the fastest recruit of her year with some very impressive credentials out of Presentation High School in San Jose.

She was MVP of her high school squad all four years, and she ran the most competitive time of her Gaucho class at the California state finals her senior year, placing 13th in the 800m with a time of 2:12.82.

When asked why she chose Santa Barbara, she immediately said “beach.” However, while the location of the school is undoubtedly a huge pull for recruits, for her, this was just one reason among countless others of why she chose to be a Gaucho.

“It was just a switch, like ‘I belong here.’ Everyone seemed really hardworking, and [it seemed like] an everyone’s-there-for-each-other kind of thing,” Tsolis said. “The day after my recruiting trip, I got home and I called [Head Coach] Pete [Dolan] and was like, ‘I want in.’”

The star runner earned a scholarship eventually with her performance at state finals, but she still accepted less for the opportunity to study and compete at her dream school.

“I could have gone to a different school and gotten a lot more money, but I just liked it here so much, and it’s paid off,” said Tsolis. “And I feel like I’m a pretty good recruiting investment, if you ask me.”

There’s no doubt that Head Coach Pete Dolan would agree on that point now, after all the success the two have enjoyed together. But this was not always so clear-cut.

Before Tori even started her first year of school at UCSB, she got off to a rocky start. She came in and got injured in just the first couple weeks of cross country training over the summer before freshman year, forcing her out of cross competition that season.

Then track season came around, and it didn’t go very well. She didn’t PR in the 800, and although she did have a PR in the 1500, she now knows that even that time was nowhere near her potential.

As if her underperformance wasn’t discouraging enough, right before the conference finals, Tori suffered a back injury that prevented her from participating in the conference event and set her back for her sophomore year cross season as well.

Unfortunately, the injuries continued as she endured a stress fracture, forcing her out of competition for the entirety of the season.

“This was just a very low point in my running career here … I just didn’t even have to go to practice, and I was making all these new friends, and I wasn’t sure if I wanted to do it anymore,” Tsolis explained.

As Tori started to get healthy again that summer, Dolan was getting frustrated with how things seemed to be turning out.

“I’m thinking she’s just kind of becoming a rec runner. She can run [at this point], but she wasn’t really training, just running,” Dolan said.

Eventually what got Tori back on track, both literally and figuratively, was some much-needed prodding from a friend and teammate who just graduated last year.

“Her teammate, Dani Moreno gets the credit,” said Dolan. “Dani Moreno still believed in her and said, ‘If you still want to do this, you’ve got to get after it.’”

Then, right before her junior year track season, Dolan told her with two weeks notice that she needed to do a two-mile time trial to stay on the team. To make things even more difficult, he gave her no target time to hit.

“I said, ‘You’ve just got to impress me, Tori. C’mon, you’ve got good credentials in high school. Just impress me.’”

Tori trained as best she could, and with the help of Moreno pacing her at the start, she was able to run 11:06 to impress Dolan and keep her spot on the team.

Since the time trial, Tori has been able to stay relatively healthy for the rest of her career while consistently pushing herself in her training.

She began chipping away at her times as soon as she returned to the track her junior season, working hard to get back into it.

“I wasn’t expecting her to run that fast ’cause it was her first real season back, [but] it got better and better and, most of the time, I was just shaking my head and going, ‘I can’t believe she’s running this fast,’” Dolan said.

It all goes back to what Dolan said prior to the time trial: “Impress me.” Now, she impresses him all the time. 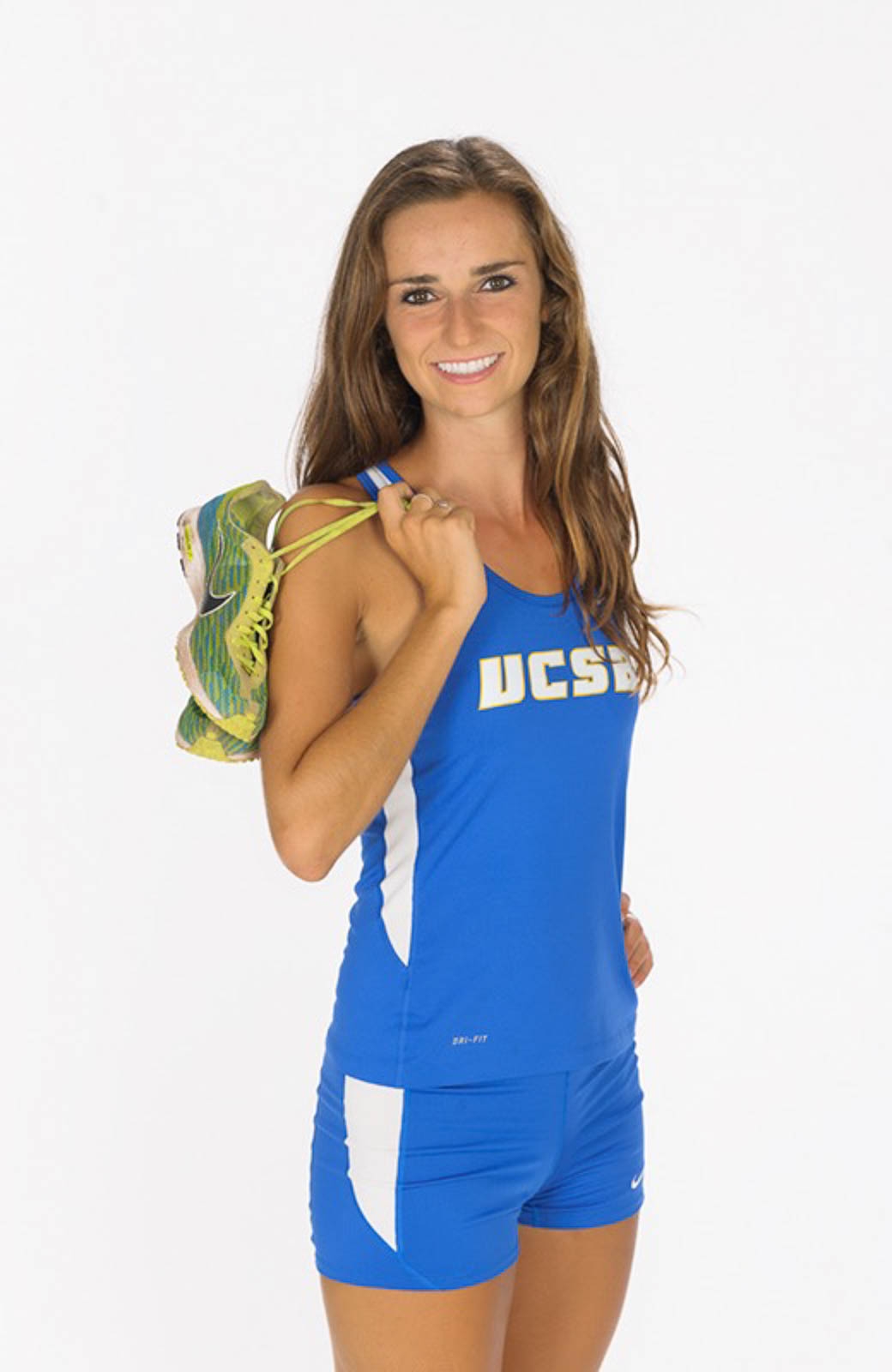 Tsolis made it to the first round of regionals that junior year. Then in her senior year in 2015, she was able to advance to the second race of the first round, moving up to No. 2 on the UCSB all-time list in the 1500m in the process.

As the team works through postseason play now, Tori is looking to make it to nationals and become an All-American this year. She also hopes she can help her team to a top-three finish in the Big West Championships.

Dolan knows Tori is already in the upper echelon of athletes he has had the chance to coach, but if she reaches these goals, he knows she will forever cement her legacy at UCSB.

“That last race at Mt. Sac (where she beat the UCSB record in the 1500), it was off the charts,” Dolan said. “My heart’s pumping, I’m going, ‘Wow, she’s doing it. She is right there with the best in the country.’ So I’m just staying with that.”

Nonetheless, Tsolis’ commitment has influenced one of the other two Toris on UCSB’s women’s team, junior decathlete Tori Usgaard, who says she has always looked up to the elder Tori for her mindset and work ethic.

“Every time you see her work out, she’s always pushing herself to be front of the pack. I think that’s the biggest thing, that she proves to everyone else that hard work pays off,” Usgaard said. “[She’s proof] that it takes time, but you have to trust the process and it’ll all come through eventually.”

Tsolis is happy to focus this much time and energy on her training because of how rewarding it is for her to see the results.

“It’s like you get out of it what you put into it, and I spend so many hours practicing. I’m on the bike, I’m on the elliptical, I’m in the pool,” Tsolis said. “[All] because I can’t run as much as I want to because I get injured easily. So I’m just doing weights and everything to stay healthy and injury-free, and it’s so rewarding now that everything has come together.”

Tori also points to the endless support and understanding of her lifestyle from her family and friends as a huge influence that pushes her and keeps her going. Her dad in particular has been trying to fly down from San Jose to watch all her races this year.

Tori has had an incredible track career for someone who almost faded out of the sport altogether halfway through college.

It only makes it more impressive that she’s now training and competing at her highest level ever at the same time as going through an intensive master’s program in economics.

A version of this article appeared on page 10 of May 12, 2016’s print edition of the Daily Nexus.