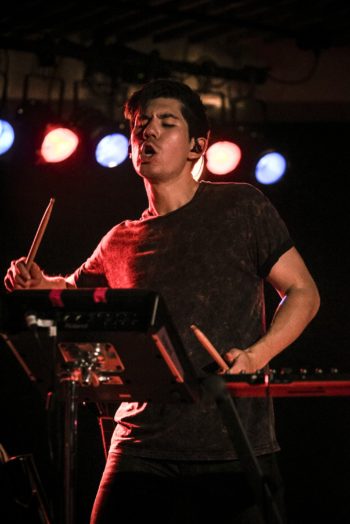 Straight off his sold out North America “Heading Home” tour, the multi-instrumentalist and music producer, Gryffin, made a special pit stop at UC Santa Barbara in The Hub last Thursday, May 5, for a special pre-Extravaganza performance hosted by A.S. Program Board. The musician, whose real name is Dan Griffith, first learned to play music via the piano at a very young age. “I started taking classical piano lessons when I was seven. I’ve been playing instruments for a while, and then I picked up the guitar when I was in middle school,” Gryffin shared in an exclusive interview with the Daily Nexus. Infused with live elements of an electric guitar, piano keyboard and melodic house beats, Gryffin’s sound is immediately presumed to be influenced by the classic rock genre.

“Even when I was younger, my older cousin Dustin was in this band called Thrice — which was a punk, hardcore-type band. I idolized him growing up and went to a lot of his shows,” the producer reminisced of his early musical inspirations. 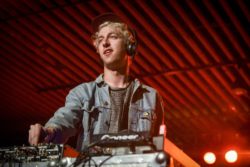 The opening DJs, UCSB’s own Conner McEuen a.k.a. Comrad and East Coast native Chrome Sparks dropped low tempo bass sets with remixed songs including, Chris Brown’s “Run It” and Simian Mobile Disco’s “I Got This Down.” At promptly 10:20 p.m., the headliner opened his show with a very own remix of Ellie Goulding’s “Burn.” As one of his early records, “Burn” introduced Gryffin into the mainstream EDM fans after the version was chosen to be included in the song’s official remixes.

“It wasn’t until I got to college that I started to get into dance music and that was when I picked up Ableton [the music software], which was what I still produce in now,” Gryffin explained. “The songs that I remember thinking dance music; what made me fall in love with it was, have you heard that song, Guru Josh Project’s ‘Infinity’? It’s like a serious throw back song now, but I remember looking back listening to that, and being like, ‘what is this music, this is insane,’ it’s sort of what opened my eyes.”

With a series of original remixed hits such as Banks’ “Beggin For Thread,” Years’ “Desire” and BØRNS’ “Electric Love,” the Bay Area native accompanied each track with a live instrument of a guitar or keyboard for a fresh, unique sound. Most notably known for working with new artists like those mentioned above, Gryffin is a champion for rising talents. “Something about the up and comers, like supporting the music that is on the rise, it’s really exciting to work in that wheel house because it’s like fresh ideas and fresh inspiration — just like being in the mentality and mindset of those types of artists,” Gryffin said. “I’m really inspired by Bob Moses. I got to do a bunch of stuff with them at SXSW and Ultra — which was really cool.”

The highlight of the night was Gryffin’s original production with singer Josef Salvat in the record titled, “Heading Home.” As the artist/producer’s first ever single, the track is an uplifting dance anthem that speaks of finding a guiding path in life amidst of the chaos and hardships. The song is a big transition for the musician, who has thus far only released remixes of original songs from various artists. A big surprise of the night came from an appearance of singer and UCSB student Grace Nevins, who sang a new, unreleased track, “Love In Ruins.”

“I think ultimately the remixes is how I got my name out there to begin with so I don’t have to abandon that at all. I still enjoy doing it, but over the course of the next year, it’s definitely going to be more of a focus to do my own stuff,” Gryffin spoke about his new music. “I’m working on an EP right now. I’ve got another single that is almost finished that I’ll probably come out with in June. I’m just actively pursuing and working on a bunch of new content”. 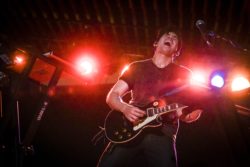 To conclude the night, Gryffin ended his set with his most famous remix, Tove Lo’s “Talking Body,” (which was also the song that introduced me to the artist). With 17 million plays on both SoundCloud and Spotify, “Talking Body” has catapulted the musician to a wider audience of fans and music critics. After playing the final guitar chord of the song, the musician thanked the audience for coming to see the show. The 26-year-old debuted his live performance this past New Year’s Eve at SnowGlobe Music Festival and has been headlining his first tour ever since. Gryffin is ultimately looking forward to some free time to obtain brand new inspiration after finishing up his sold out tour, “I get to enjoy a few months off in the summer to write music, which is gonna be sweet!”