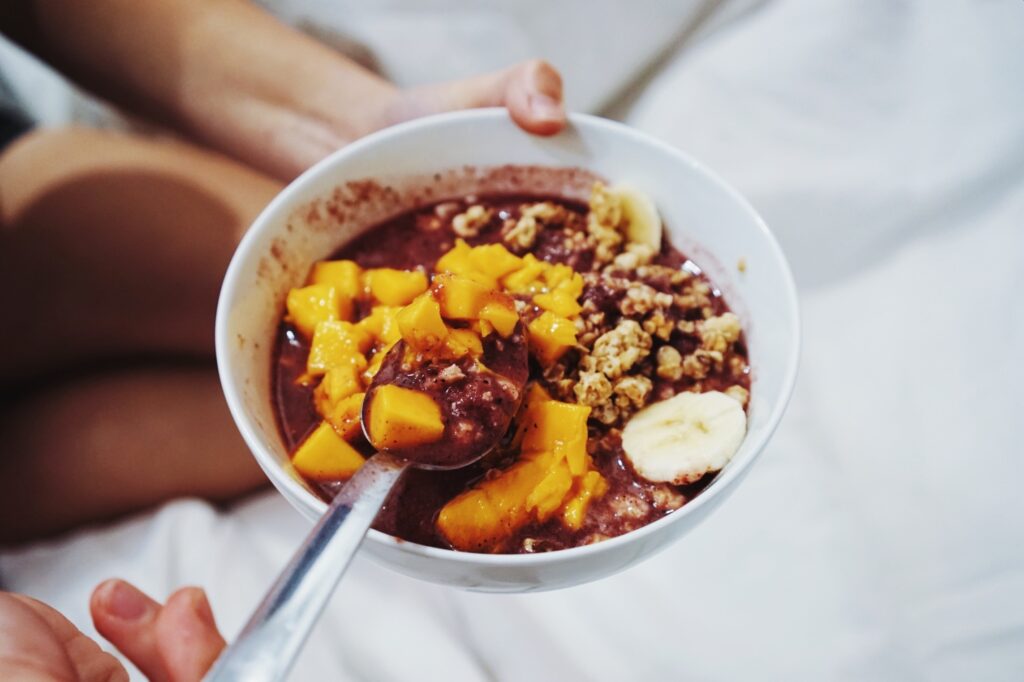 Ah, the açaí bowl.  From its colorful appearance to its tropical taste, it truly is paradise in a bowl. While I don’t remember exactly how I first got introduced to the superfood bowl, I can honestly say that I have treated myself to it regularly, many times making it at home (with plenty of mango). The açaí bowl has without a doubt become a celebrity among health foods; its image exists on Instagram feeds and Pinterest boards and other social media sites. But how exactly did it come to be so popular?

Before the bowl, there was the fruit. Açaí (ah-sah-ee) has long been consumed in Brazil, with the ribeirinhos (river people) being the first to do so. For the ribeirinhos, who are native to the riverbanks of the Amazon rainforest, açaí has always been a staple food. Eaten like soup or with meat or fish, rarely is there a meal without açaí.

Its journey outside the Amazon River delta started in the 1970s when many ribeirinhos began to migrate to the northern cities of Belém and Macapá. They brought with them the açaí and began selling them on the streets in zip lock bags. Marked by red flags, açaí vendors are still common today and are easily visible along streets and highways.

By the 1980s, the açaí berry made its way further beyond Amazonia by way of the Gracie family, whose name has become prominent for their development of Brazilian jiu jitsu. Praising the fruit as an energy booster, the Gracie family began recommending it to their athletes as part of the jiu jitsu diet. Its proclaimed energy enhancing powers soon reached other athletes along the shores of Rio. Since the berry has to be frozen when shipped, the surfers and beach volleyball players alike began eating açaí like ice cream. The familiar açaí bowl began to popularize throughout Brazil by the 1990s, and familiar toppings like granola and banana became typical.

It was through Southern California brothers Ryan and Jeremy Black and their friend Edmund Nichols that açaí made its way into the United States. Celebrating the millennium New Year, the three headed out on a surf trip to Brazil in December of 1999. There, the then mid-20 year olds had their first taste of açaí and were hooked. Seeing the fruit’s potential in the United States, they began making plans to open their own Rio-esque açaí bar with franchise potential.

The following summer, Ryan and Edmund returned to Brazil in hopes of finding an açaí supplier. They ended up finding a processing plant in Belém and through it they began going through their plans of exporting frozen açaí. By April of 2001, the guys had an entire shipping container of frozen açaí stored in a rented industrial freezer in downtown Los Angeles. The guys hustled hard, going door to door trying to sell the new product. Their hard work paid off, as they quickly found themselves further introducing the fruit from beyond Southern California to the east coast, in places like South Beach in Miami and New York. Now, their company, Sambazon, is perhaps the most popular açaí brand in the US.

Today, the açaí bowl is one of the trendiest health foods. The super fruit is praised for being impressively packed with antioxidants, vitamins and essential amino and fatty acids. Aside from also being full of fiber and protein, when mixed into a bowl topped with granola, a drizzle of honey and choice fruits, it can be absolutely delicious.

Beyond the trend though, is a piece of lifestyle and culture that found its way out of the Amazon rainforest and eventually made its way to the U.S. through the interest of three young guys on vacation just trying to catch some waves and have a good time. I’m not sure if açaí bowls are a thing back in the fruit’s original home of the Amazon rainforest, but one thing I am sure of is that I’m going to be enjoying many bowls this summer.