The No. 18 UCSB baseball team picks up yet another win at Caesar Uyesaka Stadium, extending its consecutive home winning streak to 17 games after defeating Pepperdine in a close 4-3 match. 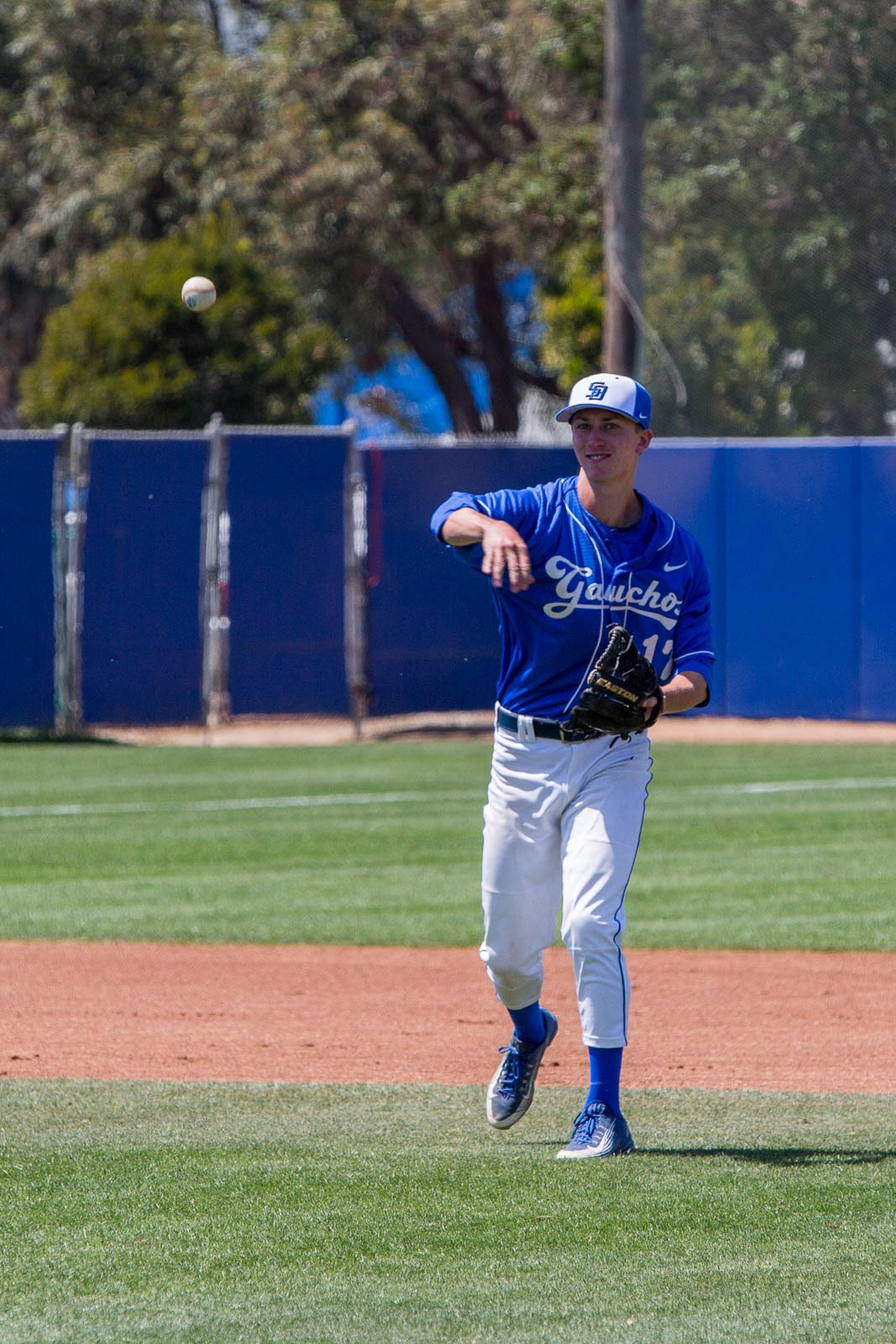 After an easy catch, Clay Fisher tosses the ball back to the pitcher. Dustin Harris / Daily Nexus

“It feels good,” Head Coach Andrew Checketts said. “The guys did enough to get it done and I thought we played okay; not great, but okay.”

Santa Barbara is now 30-10-1 with an 8-4 Big West record and currently sits at second in the conference standings. Pepperdine falls to 20-19 on the season and 5-10 away from home.

The Gauchos have been impressive since being swept by Cal Poly, winning their last five games and averaging 6.6 runs in those matches. They have also gutted out some tough victories as three of the last five have been decided by one run, including the game against St. Mary’s, which went 11 innings, their second longest match of the season.

UCSB displayed a solid performance in both sides of the field and was able to pick up its 30th win of the season for the fourth consecutive year. This is only the second time in program history that the team has accomplished this feat, with the last time coming during the 1982-1987 seasons.

It was a great sight in the first inning of the game to see redshirt junior pitcher James Carter get his first action since coming back from Tommy John surgery last season.

“I was excited to see him [Carter] back,” Checketts said. “It was good to see him pitch good as well.”

The right-hander only went one inning, but it sure was a strong one, allowing one hit, no runs and also striking out one of the Waves’ best hitters in junior Manny Jefferson.

“I was nervous through the first couple of guys, but then I settled in and felt confident after that,” Carter said.

In the bottom half of that inning, the Gauchos started quick, taking an early 1-0 lead as the first three hitters all got singles with the latter batter. Redshirt sophomore left fielder Josh Adams ripped an RBI single thanks to a great hit to left field, scoring redshirt junior center fielder Andrew Calica and moving sophomore short stop Clay Fisher to second.

Freshman pitcher Kyle Hatton stepped in after Carter’s solid inning and allowed only one hit in the second and third inning combined. In the fourth, however, Pepperdine tied the game at one thanks to Jefferson’s 11th home run of the season.

Santa Barbara would respond in the bottom of the fifth inning, adding two runs and going up 3-1 after freshman Tevin Mitchell scored on an error by the Waves and Fisher’s RBI single down center field and scoring Calica.

UCSB added to its lead in the next inning after freshman catcher Sam Cohen, in his ninth game of the season, hit an RBI double to right field, scoring teammate Devon Gradford and giving his team the 4-1 lead.

Just as the Waves looked like they were done for the night, junior outfielder Matt Gelalich hit an RBI single in the seventh frame that just got by the Gauchos’ first baseman and cut the lead to two runs.

In the top of the eighth inning with one out, senior first baseman Brad Anderson hit a solo shot home run off of Trevor Bettencourt, who had just replaced Hatton, that again brought Pepperdine close to tying the game, which was now 4-3.

The Waves would have tied the game, but thankfully the redshirt junior Bettencourt caught junior Aaron Barnett off guard and was able to pick him off at first for the team’s first out. Had that not happened, Anderson’s homer would have been a two-shot and the game could have ended differently.

Bettencourt was the pitcher who let down his team down in the Gauchos’ only home loss of the season to St. Mary’s after giving up five runs in the eighth frame of that game.

After the homer and accidently hitting Jefferson and the head putting him on first base, the right-hander did not look afraid of the situation and showed his skills, striking out redshirt sophomore Ben Rodriguez and forcing sophomore Lambert Chase into a fielder’s choice for the final out of the inning.

The Gauchos did nothing in the bottom of the eighth and relied on its defense to finish off the game. After two easy outs, Pepperdine made the game interesting, ripping off two singles and having runners on first and second.

Calica, the team’s great center fielder, made an impressive catch by tracking the ball on a hit that looked like it was about to go over his head for the final out, and sealed the 4-3 victory and 17th straight home win.

Although the win was not the most impressive of the Gauchos’ season, it still was a win nonetheless, and it again displayed the team’s ability to grind tough wins as they are now 11-1 in one-run games.

Pitching-wise, Hatton was fantastic, picking up his third win of the season after going six innings and allowing five hits and two runs while striking out a career-high 10 batters.

“Kyle Hatton was great with his three pitches,” Checketts said. “He has a sort of invisible fastball. It never breaks 80 [mph], but no one can hit it.”

In terms of pitcher James Carter, UCSB will continue to monitor him with care and make sure he is progressing steadily as the season heads into crunch time.

“He will get more pitches each time he’s out there and we will continue to see how he feels,” Checketts said.

“I’ll be throwing next week, and each week my pitch count will go up, and I’m excited about that,” Carter added.

Santa Barbara’s next series will be against UC Davis at Dobbins Baseball Stadium.