The Daily Nexus
Sports
Gauchos Win Final Home Series
May 2, 2016 at 5:05 am by Liam Bailey

With balloons, streamers and an enthusiastic crowd, the UCSB softball team celebrated their seniors in suburb fashion, winning two out of its three games against the Hawaii Rainbow Wahine this past weekend. 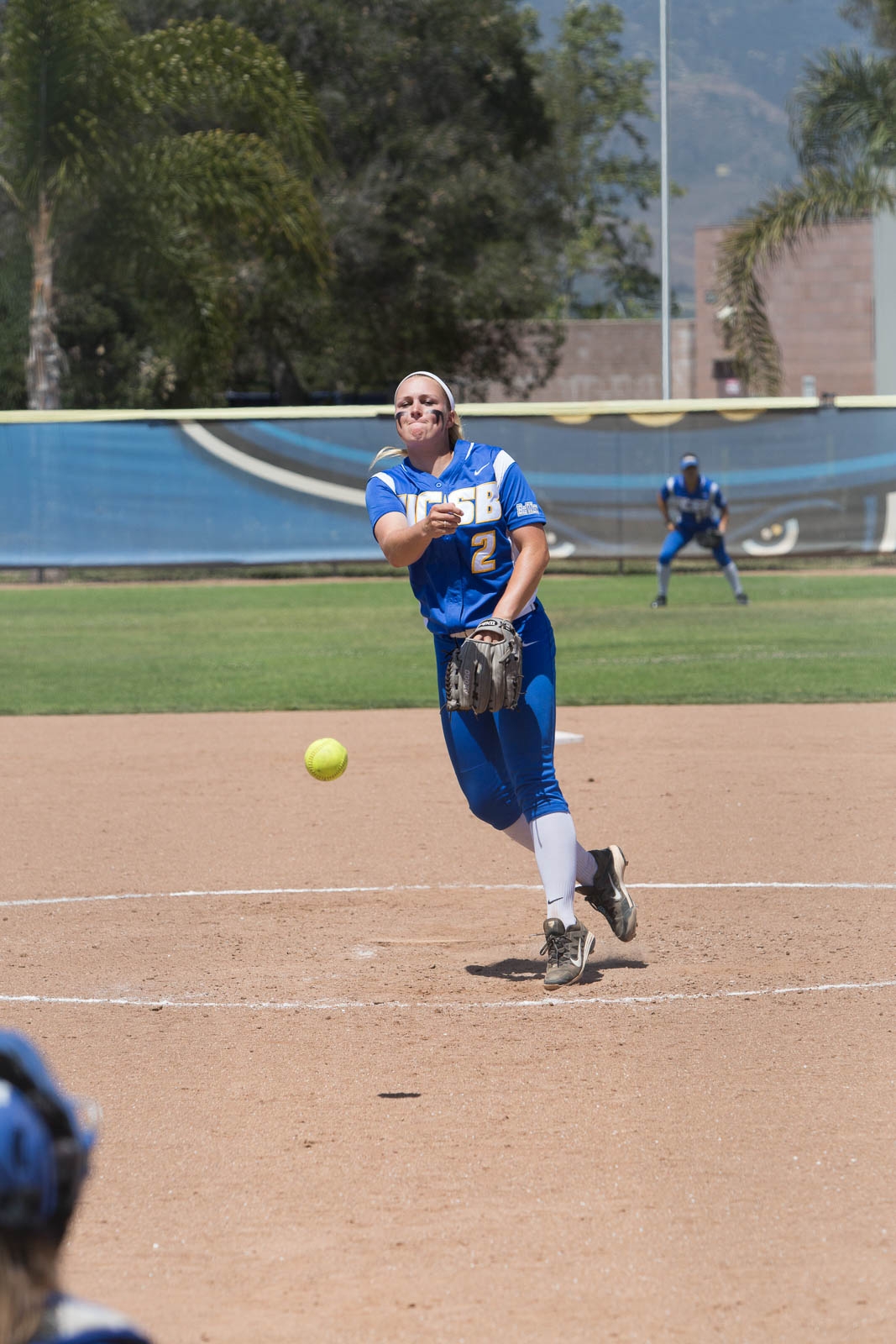 “Our hitting was contagious,” Head Coach Brie Galicinao said. “we had production from all across the lineup.”

The high energy was clear amongst the UCSB squad, who fed off one another’s focus in their final home series of the season.

On Sunday’s senior day double-header, the Gauchos and Rainbow Wahine split their two games, with the Gauchos winning the first 9-5.

The Rainbow Wahine avoided the sweep by winning the second contest 4-1 on the back of a brilliant pitching performance from sophomore Brittany Hitchcock.

In the day’s first leg, the scoring started in the bottom of the second with a leadoff shot over the left field fence for first-year infielder Sierra Altmeyer which gave the Gauchos a 1-0 lead.

A wild pitch by UCSB senior Ashley Ludlow in the top of the third tied the game at one, and the Rainbow Wahine would go on to take the lead after a three-run inning in the top of the fourth making the score 4-1.

The Gauchos came roaring back, however, not wanting to be denied on an emotional day such as senior day.

Junior outfielder Jacqueline Hinojosa singled up the middle to load the bases before junior center fielder Stacy Cavazos ripped another single to center field to score Tetzlaff and Altmeyer to close the gap at 4-3.

UCSB was not done, as after sophomore right fielder Jessica Johnston bunted the two baserunners over, first year shortstop Melanie Menor singled to bring home both Cavazos and Hiojosa, giving the Gauchos four runs in the inning and the lead which stood at 5-4.

Despite a hard hit leadoff double from junior pitcher Kanani Aina Cabrales, part of a mass substation for the Rainbow Wahine in the previous inning, Ashley Wright was able to retire the side, helped by a great snag and throw at third base by Emily Brucelas for the inning’s final out.

The bottom of the fifth frame proved to be fortuitous for the Gauchos, beginning with a walk for Jessica Tetzlaff. Jacqueline Hinojosa then bunted down the third base line, reaching first on an error by the first year infielder Nicole Lopez. Stacy Cavazos came though again with a shot to the left-center warning track, where first year center fielder Sarah Muzik ran into the wall trying to catch the ball.

After Jessica Johnston reached on a fielders choice with Tetzlaff being thrown out at home, Melanie Menor beat out a ranging throw from the shortstop Ojala to score Hinojosa from third.

In the next at-bat, a fly ball off the bat of Arianna Palomares was dropped by left fielder Ulu Matagiese, allowing both Jessica Johnston and Stacy Cavazos to score making the score 8-4.

Senior catcher Samantha Stark walked to bring up junior Emily Brucelas, who drove one up the middle to score Melanie Menor and what would be her team’s final run.

Hawai’i scored on a wild pitch the next inning, but no rally was in store as the Gauchos won the first Saturday contest 9-5, the win going to pitcher Ashley Wright.

The Gauchos did not fair as well in the second leg of the double header, losing 4-1 as sophomore pitcher Brittany Hitchcock went the full seven innings, allowing only six hits, one unearned run, and no walks to go along with four strikeouts.

A masterful performance, Hitchcock made up for a rough outing on Friday by hitting all her spots while in the circle.

For UCSB, first-year pitcher Veronica Gulvin was passable, allowing three runs in four and a third innings before being replaced by Ashley Ludlow, who closed the game in more concise fashion than her shaky start in the previous game.

Four runs were plenty for the Rainbow Wahine, however, as sophomore catcher Rachel Lack’s two run homer in the third inning proved to be enough for the victory on its own putting them up 2-0. Lack would also drive in first-year left fielder Jennifer Iseri on a fifth inning single making the score 3-0.

A late rally in the sixth gave the Gauchos a glimmer of hope, as senior Arianna Palomares started the action with a blooper to right field, just past the outstretched arm of Tayana Mata at second base.

With Stark on second and Brucelas on first, Altmeyer rocketed one to center field, scoring Stark which made the score 3-1 in favor of the visiting team.

The Friday 9-3 Gaucho victory was decided in the bottom of the third frame,

where with two outs and Jessica Tetzlaff on second, back to back doubles from Melanie Menor and Arianna Palomare gave UCSB a 3-1 advantage.

After Sierra Altmeyer loaded the bases with a grounder into to left field, Jacqueline Hinojose singled up the middle to score Stark, making the score 5-1 Gauchos.

Another three runs in the bottom of the sixth juxtaposed by Hawaii’s one run in the top of the inning gave UCSB a large cushion at 8-2 and let them coast to the solid win.

Despite losing the final game of the series Saturday afternoon, the Gauchos were still in good spirits for their senior celebration.

With parents, family members, and friends galore, the Gauchos honored both the Rainbow Wahine seniors, as well as five of their own: Ashley Ludlow, Jessica Tetzlaff, Alex Pingree, Arianna Palomares, and Samantha Stark.

The weight of their accomplishments during four years at UCSB was staggering, especially when read aloud over the loudspeaker.

“It was a fun ride,” said senior catcher Samantha Stark, looking back on her time at UCSB. She continued, “we ended it with a bang,” and in relation to the final two series on the road, she declared plainly, “we’ve got nothing to lose. We just want to keep fighting and take these series.”

After the game, the head coach of the UCSB softball team had nothing but praises to share about the graduating seniors.

“The seniors have stepped it up in the past couple of weeks.” Coach Galicinao said. “They’ve been great leaders, not only on the field, but just keeping everybody focused.”

She continued, explaining, “it’s easier to stay engaged and compete when you’re one of the top two teams, but our team has been really consistent in their effort and in how they’ve been competing, and a lot of that has to do with senior leadership.”

First-year Sierra Altmeyer noted that the younger players, including herself, “have become really close with the seniors,” and that they were, “just doing it for them.”

The camaraderie was more obvious than ever for the UCSB softball team on Saturday, as a tight-knit group of players came together to win the final home series of the 2016 season.

The Gauchos next game is a doubleheader against UC Davis Saturday, May 7 beginning at 1 p.m. with the second game starting at 3 p.m. at La Rue Field.