This past weekend, the UCSB men’s tennis team won its second-straight Big West Tournament title after sweeping UC Irvine 4-0 in the semifinal round and downing rival Cal Poly in the finals 4-1.

It was an exciting weekend for Gaucho tennis, as both the men’s and women’s teams took home the conference trophy. With this win, both teams have punched their ticket to the NCAA tournament. 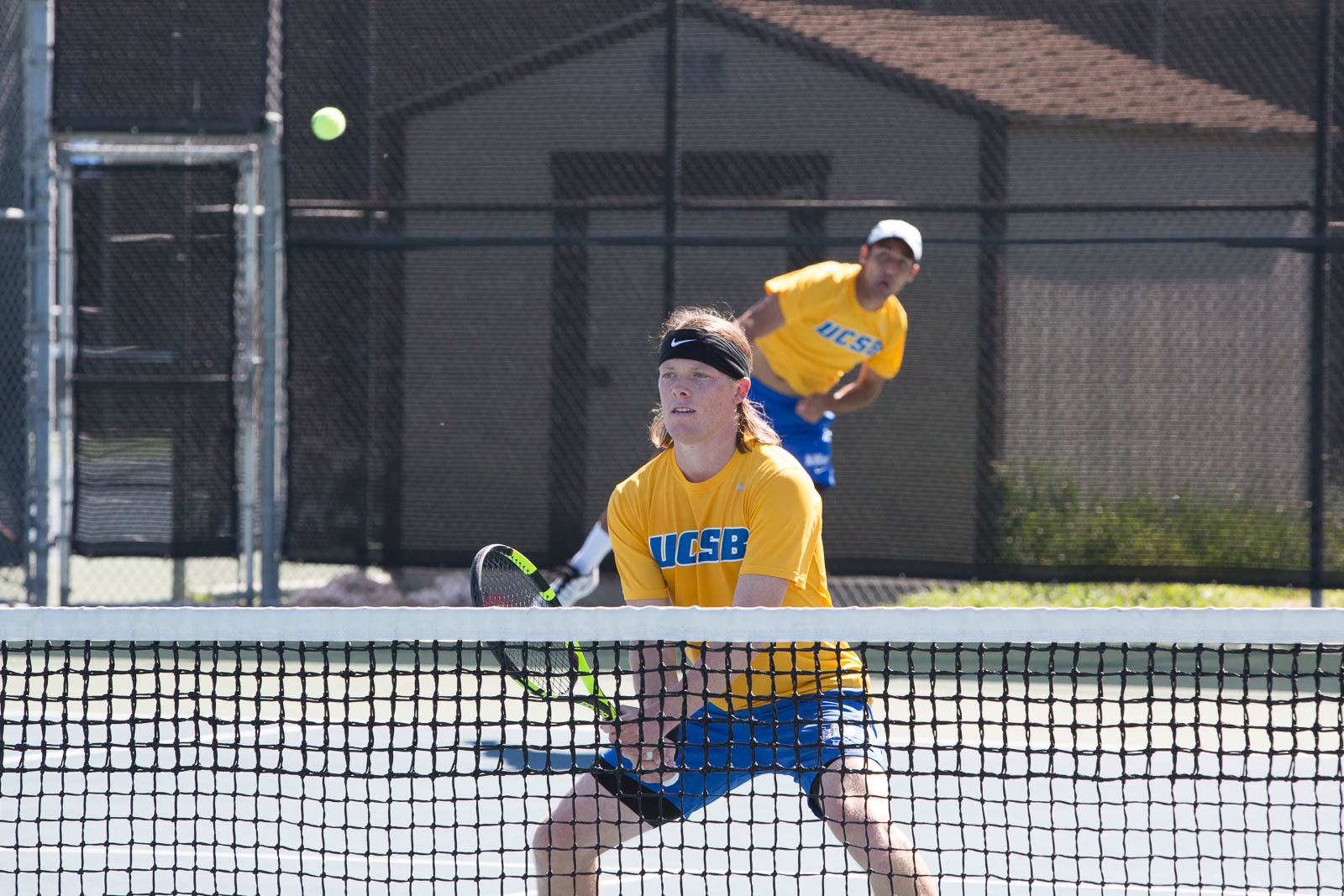 “This is one of the best seasons we have had and I think we are really deserving of this championship,” Head Coach Marty Davis said. “I really think we can do some damage in the NCAA Tournament.”

As the top seeded team, the Gauchos took a bye to the semifinal round where they faced the fourth seeded UC Irvine, a team that Santa Barbara downed earlier in the regular season 6-1.

Santa Barbara jumped out to a 1-0 lead, sealing the doubles point with wins on courts one and three. The nation’s 76th best doubles team of seniors Nathan Eshmade and Miles Seemann took the first win of the day on court one downing the Anteaters 6-2.

The veteran duo of junior co-captain Morgan Mays and Andrew Riminton rallied to win five straight games to seal the doubles round with a 6-4 win on court three despite starting the match trailing 4-1.

“We played absolutely great in doubles,” Davis said. “It really gave us momentum for the rest of the match.”

The Gauchos were in need of just three singles wins after defeating the Anteaters in the doubles round. Junior co-captain Teague Hamilton and sophomore Cody Rakela answered the call as they have all year playing on the lower courts with two-straight set sweeps.

Hamilton was the first off the courts playing at the sixth spot and defeated the Anteaters’ Vatsal Bajpai 6-4, 6-2. Rakela put the Gauchos in a position to win the match topping UCI’s Justin Agbanyani 6-4, 6-4 on court five.

Mays was able to seal the match on court three with a sweep of his own over Luca Marquad. The co-captain gave his team the 4-0 win defeating his opponent 6-3, 6-3.

The Gauchos moved on to the final round to face the tournament’s second seeded Cal Poly Mustangs. This would be the second meeting between these two teams in just one week, as Santa Barbara defeated San Luis Obispo 5-2 in its final dual match of the season. The defending champions once again were crowned, downing the Mustangs 4-1.

UCSB started off the match with a strong performance in doubles play, taking two quick matches on the lower courts.

The veteran team of Riminton and the team’s co-captain in Mays was off the court first with a huge 6-1 win on court three. The Gauchos defeated the Mustang team of Dan Cardiff and Karl Enader to give their team the edge.

The Gauchos headed into singles play with a 1-0 lead and looked for just three wins to be crowned champions.

Santa Barbara was the first to strike in the singles round with two straight wins to take a 3-0 lead over rival Cal Poly.

Moreno de Alboran added the second win as he defeated Garret Auproux for the second time this week on court two 7-5, 6-3.

Finally, in a three set battle on court four the championship was sealed as Holm defeated Josh Ortlip 6-1, 2-6, 6-1 to give the Gauchos a 4-1 win and conference honors.

“The matchups in the championship were the exact same from our dual match a week ago,” Davis said. “It’s great to see these guys play even better the second time around.”

The Gauchos will now have an automatic bid to the NCAA Tournament as a result of their conference title, making the ‘Big Dance’ for the second-straight year. The selection show, which will determine UCSB’s seeding and postseason matchup, will take place Tuesday, May 3 at 2:30 p.m. on NCAA.com