The final six teams of the New Venture Competition were selected on Monday, chosen from a pool of 18 groups who presented their startup ideas at last week’s New Venture fair.

Dermachill, EVMatch, InGrain, Opal, OSMO and Vibe will be advancing to the Venture Competition Finals on May 19, vying for an opportunity to win up to $10,000 in prize money. 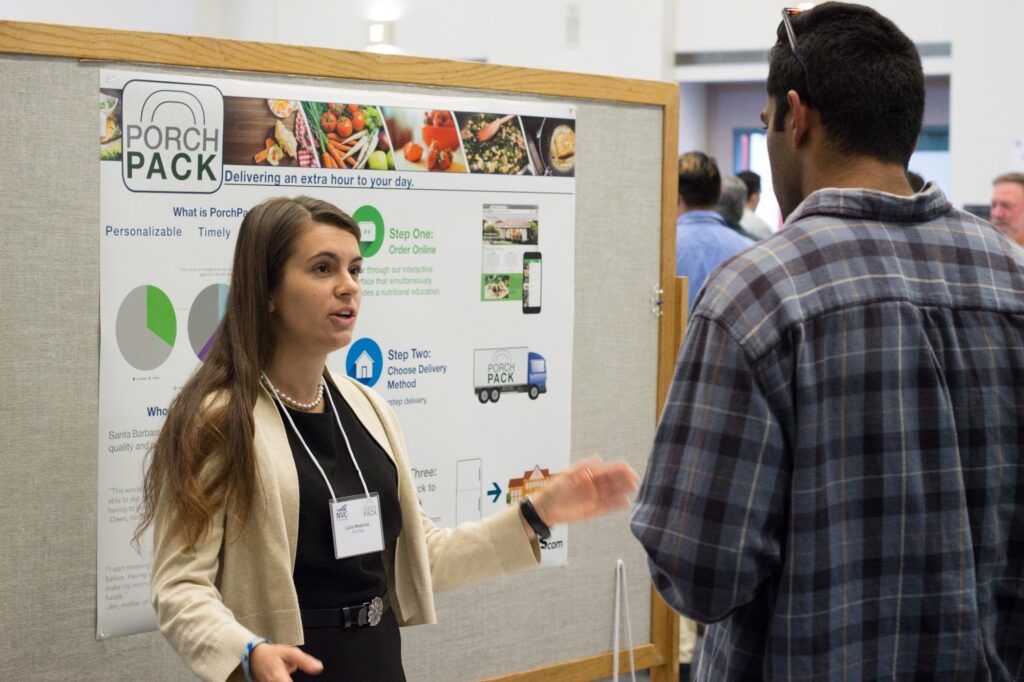 A correspondent for Porch Pack explains the startup’s business model to an interested convention-goer. Porch Pack is one of many food-based startups seen at the New Venture Convention Semi-finals at Corwin Pavilion Thursday night. Jose Ochoa / Daily Nexus

According to entrepreneurship director David Adornetto, this year’s competitors in the New Venture Fair brought high quality ideas and products to the table.

“[The competitors] represent some of the best and brightest students on campus, and they’ve shown themselves very well,” Adornetto said.

Dermachill, a handheld cooling-system device, was created to mitigate the itchiness of eczema and other skin conditions.

Jeffrey Fung, the project creator and third-year economics and accounting double major, said he developed the device because his sister has a severe eczema condition. Through this project, Fung said he has been able to pursue his dream and speak with people he would not have met otherwise. 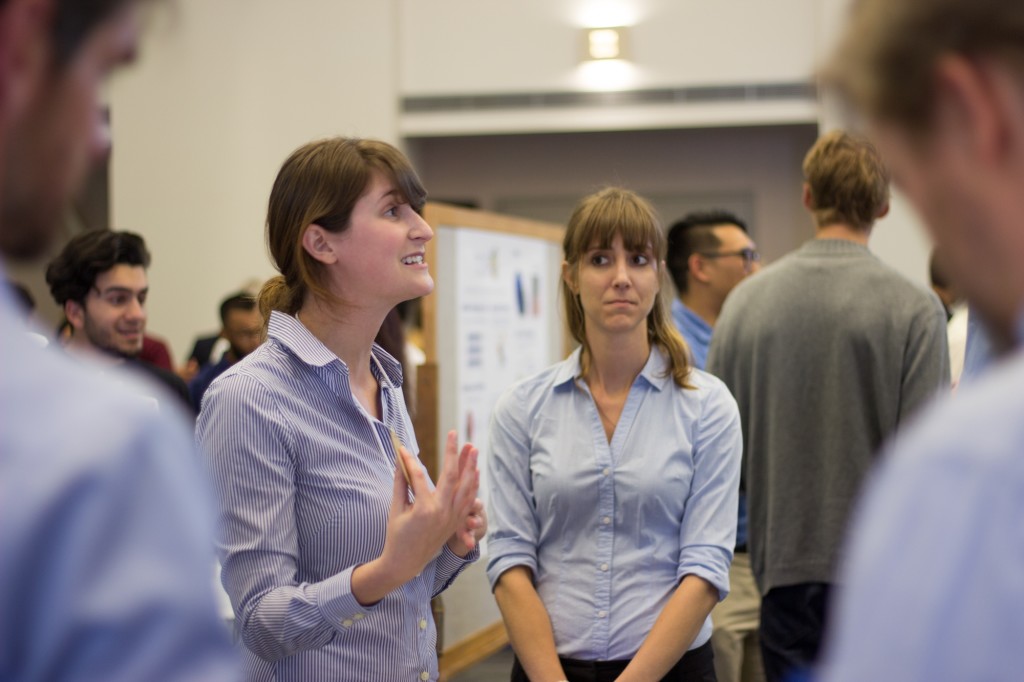 “I didn’t know any of the people that are on my team, and I got up one day and made a pitch about this topic for eczema,” Fung said. “The Technology Management Program has given me the ability to connect with people so far beyond me. It’s probably the best experience at UCSB so far.”

Fung said he is “selling a new way of life” by offering the device for $150 and the hygienic pads for $10.

EVMatch is an online marketplace that aims to connect electric vehicle (EV) owners with close and affordable local owners of residential EV charging stations, as well as provide hosts with a way to generate returns on their home charging infrastructure.

Erin Williamson, graduate student and one of the EVMatch project members, noted that the team expects exponential growth in the use of electric vehicles, and hopes that this project will encourage more EV usage.

InGrain is a startup that provides sustainable coasters and packaging for craft beer. Their products are composed of a mixture of grain byproduct from beer and recycled paper.

Tera Alpaugh, graduate student and project collaborator, said 80 percent of breweries invest in sustainability but only 16 percent advertise it.

“There’s a disconnect among millennials,” Alpaugh said. “Most of them are drinking these beers and care about the environment.” 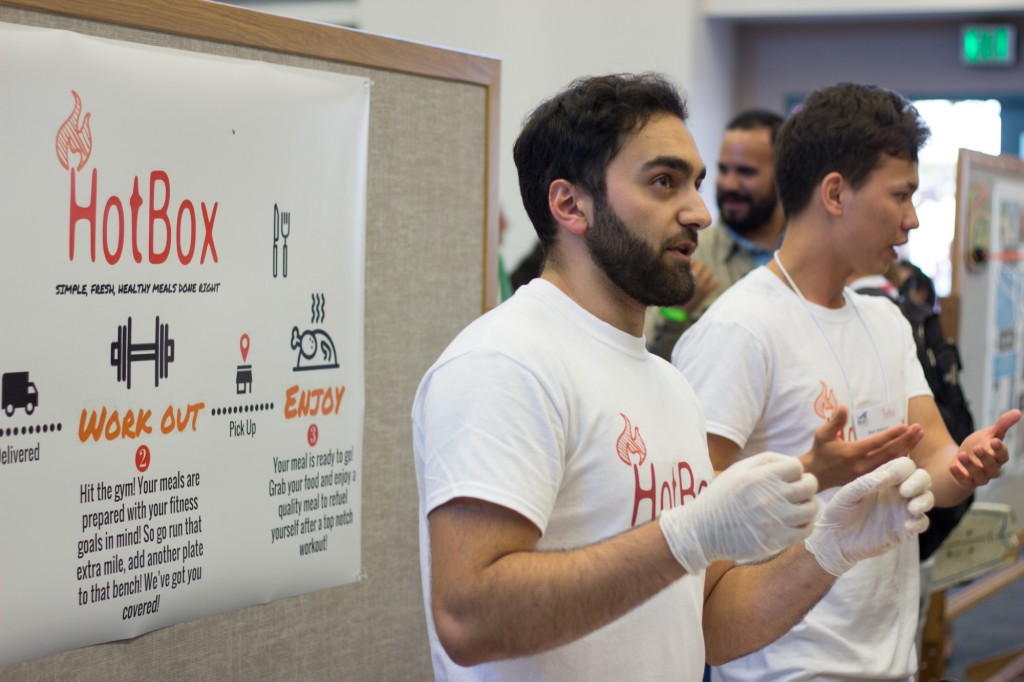 Members of the startup Hotbox hand out free samples of their product, a sample dish of chicken. Hotbox intends to bring hot, healthy, affordable meals to the target audience of gym-goers. Jose Ochoa / Daily Nexus

A team of three individuals from the Materials Department started Opal, a company that designs and manufactures high resolution displays for wearable applications such as the FitBit and other near-eye consumer electronics. They create screens and μLED displays that perform and operate more efficiently than OLEDs and LCDs.

OSMO, the creation of graduate student Kyle Neumann, is a portable water sampling device that offers continuous water sampling for coastal and freshwater conditions, as well as being 50 percent cheaper than similar products.

Vibe is a wearable device meant to assist the visually impaired by providing individuals with more information to navigate their surroundings.

Vibe was created by combining the electrical engineering background of graduate student Harald Schaefer, the technology management experience of Kelsey Judd and Janek Metzner’s work as an aid for a blind student in Germany. 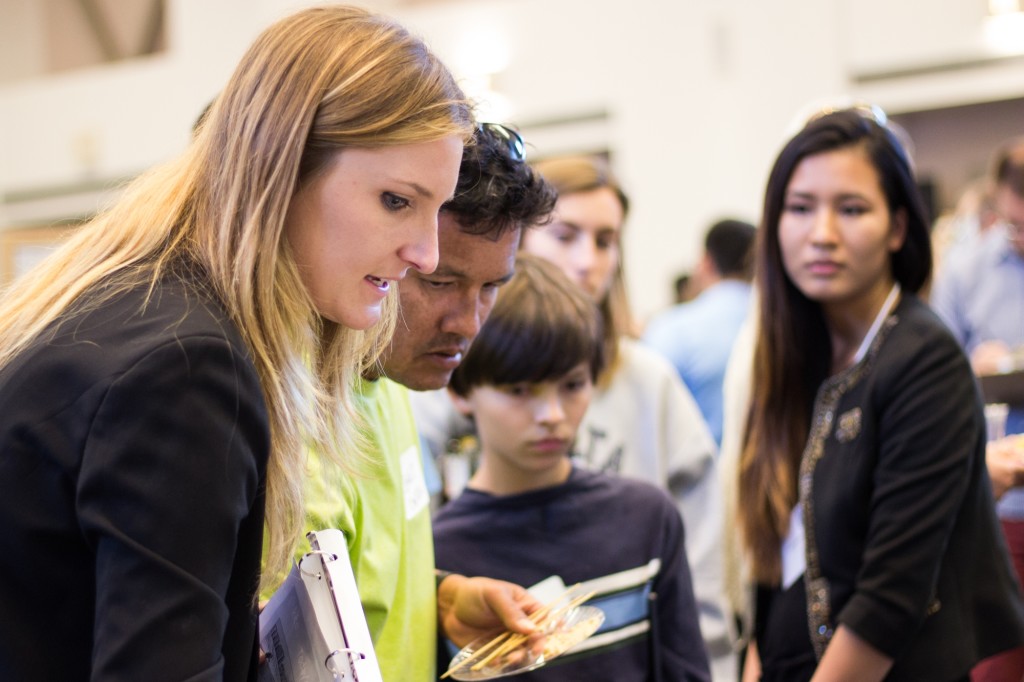 A correspondent for Kite discusses her company’s premise. Kite is a startup which intends to deal with the problem of solar panel “soiling,” which causes damage to solar panels through the accumulation of dust, by harnessing wind power. Jose Ochoa / Daily Nexus

By utilizing an ultrasonic sensor, this wearable device translates information about the environment to users through vibration patterns.