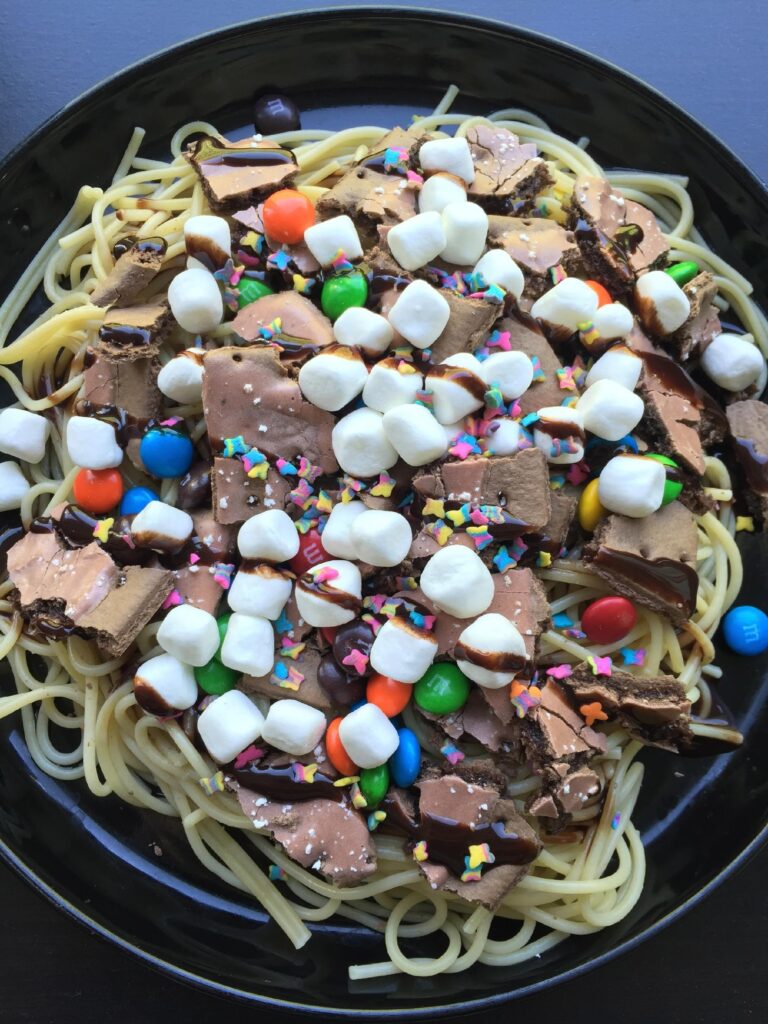 With Buddy the Elf as his new given name, the boy grew up with a North Pole lifestyle, soon discovering the four main elf food groups consisted of candy and syrup. Swirls of candy canes, fun-shaped cookies, squishy sugar gumdrops and fluffs of vanilla frosting filled his bubbling thoughts. Some may call it an addiction, considering the fact he stored a travel-sized bottle of maple syrup in his back pocket in case of an emergency, but it sounds pretty reasonable to me.

Luckily (or maybe not so luckily) for us, Buddy carried over his sugar obsession to the bustling scene of New York City when he was in search of his long-lost father. His bedazzled spaghetti creation was a jaw-dropper. Sticky maple syrup, Frosted Chocolate Fudge Pop-Tarts, M&M’s, mini-marshmallows, Hershey’s chocolate syrup and a poof of colorful sprinkles all twisted and tangled into the wiggly locks of stringy spaghetti. Buddy the Elf only received bug-eye stares and awkward smiles for his artsy, fun masterpiece, but honestly, my first reaction would have been a curious question as to how it tastes. Thus, I took the challenge upon myself to scour the grocery store for every last ingredient and follow the expertise of an elf.

First of all, let me clear the air with these three points: One, I was completely uneasy and very unsure about this meal; two, I did not wear an elf costume at any moment of this experience (I do not own such a thing); three, I chickened out by using a fork instead of my hands like an animal, which Buddy courageously did in the film.

I will say that the preparation period was incredibly simple and, not to mention, TOTALLY FUN! It was like finger painting, except that you get the added bonus of devouring it once it is complete. Embarrassing as it is to admit to you and to myself, I honestly enjoyed it. Since the plate was dripping with syrup and overflowing with toppling sweets, I was forced to skip the formal twirling etiquette of eating spaghetti and instead shoveled the mess into my mouth repeatedly with my back hunched over to get a taste of every single ingredient. The way I illustrate this experience makes me seem like some ravenous goblin, so good thing you were not there to witness it and judge me. Keep in mind, however, that you can only judge me once you have successfully attempted this colossal pile for yourself.

The ratio of gooey syrup to both squishy and chewy pieces of candy was on point, considering my taste buds were practically bouncing off the walls of my mouth with every momentous bite. If I had to choose, my favorite part would have to be the colored M&M’s because of its crispy outer coating and dissolving chocolate center. I am not the hugest fan of Pop-Tarts but I would suggest that an alternative flavor might heighten the experience.

Unlike finger painting and other crazy colorful crafts, this creation was surprisingly quick and simple to clean up. The mound of leftover spaghetti naturally slipped off the plate and glided into the trashcan. With only a quick sponge to the plate, it was sparkly clean and ready for seconds! I definitely was not in the mood for another heaping plate of a cavity-filled wonderland, but it was 100 percent worth my time and curiosity. I dare you and your friends to take the challenge next and see if you get a happily ever after like Buddy the Elf surely did!