Walter Kohn, renowned Nobel Laureate and professor of physics, passed away at the age of 93 on Wednesday afternoon, leaving behind a legacy of excellence at UCSB.

Kohn was born in Vienna, Austria on March 9, 1923. As a teenager, he was rescued through the Kindertransport operation that brought Jewish children from Nazi Germany and Austria into British foster homes.

In 1940, he travelled to Canada and enrolled in the University of Toronto. Because he was restricted from the chemistry building due to his Jewish heritage, he began pursuing degrees in math and physics. 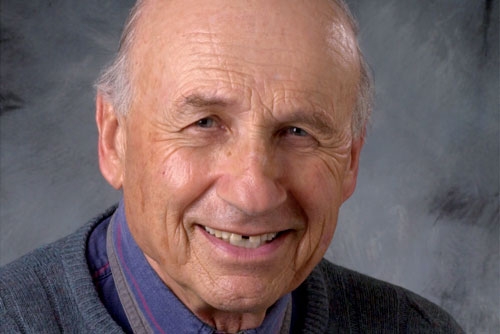 Walter Kohn founded the Institute for Theoretical Physics at UCSB. Courtesy of ipam.ucla.edu

After receiving a Ph.D. and completing a postdoctoral fellowship at Harvard, he worked at Bell Telephone Laboratories, the Niels Bohr Institute in Copenhagen, UC San Diego and Carnegie Tech, which is now Carnegie Mellon University. Kohn spent the final years of his career at UCSB.

James Langer, Professor Emeritus of physics at UCSB, first met Kohn in 1954 as an undergraduate at Carnegie Tech. In an excerpt from an article that will soon be published, Langer writes that during this time, Kohn was “emerging as one of the new leaders in solid state physics.”

“Walter led the ITP to a strong start,” Langer writes. “It’s activities had a multidisciplinary flavor from the beginning. The rise of UCSB as an internationally prominent research university was due in large part to the growing reputation of the ITP.”

“Walter set a tone of modest, warm, and thoughtful leadership for the ITP especially in guiding talented young scientists at the beginnings of their careers.” — James Langer

His work in solid state physics eventually led to the highlight in his career at UCSB: winning the Nobel Prize in Chemistry in 1998 for his development of Density Functional Theory, which is now used as a computational modeling method for physics, chemistry, and materials science.

“Walter set a tone of modest, warm, and thoughtful leadership for the ITP especially in guiding talented young scientists at the beginnings of their careers,” Langer writes.

In an announcement to the university, Chancellor Henry Yang said, “Professor Kohn was a mentor and role model for colleagues and students alike. Many have been inspired by his incredible life story and his work to promote tolerance and world peace. The tremendous impact of his life and work are beyond anything I can describe.”