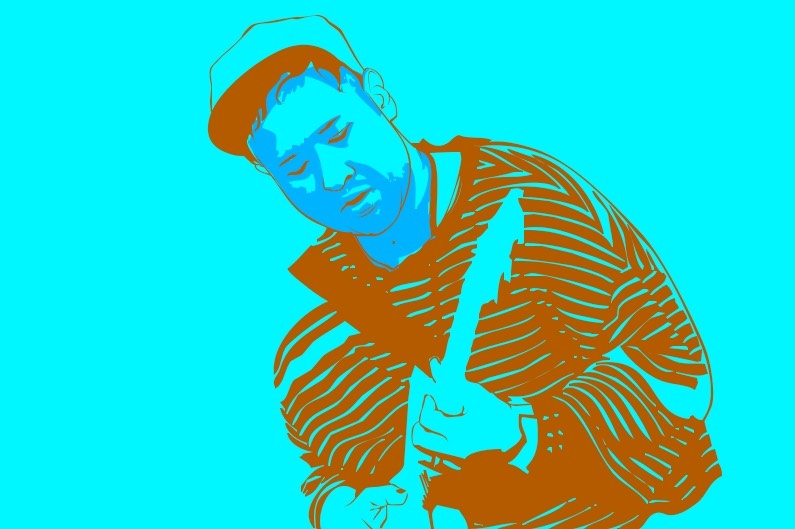 Similar proclamations and unadulterated screams of excitement came from every which way, filling the intimate venue with sounds fit for a stadium as Unknown Mortal Orchestra took the SOhO stage last Thursday night. Before the Coachella-bound band made their appearance, however, Vinyl Williams got the crowd warmed up.

Rewind to 9 p.m. Four men grace the tangle of wires that is the stage, each markedly different in appearance. For those like myself who had never heard of openers Vinyl Williams before, it was immediately clear that their sound would be hard to gauge from their presence. A bassist with sleek hair, a sweatshirt and wing-tipped boots; a goateed and Hawaiian shirt-wearing drummer; a keyboardist/guitarist decked out in a fine black blazer; and a front man sporting a tribal coat and a curly mane concealing the bulk of his expression offered little in the way of my musical style predictions. Once the hodgepodge of musicians got started, however, it was clear that they were a perfect warm-up to UMO. The L.A.-based group’s Tame-Impala-esque, affected sounds and eerie harmonies grounded by deep bass started the evening off right with psychedelic and celestial vibes.

“Your eyes are twinkling and you’re all purple,” Lionel Williams, the band’s front man, said through his curtain of curls. “You’re like little raspberries.”

Though there was something to be said for SOhO’s lighting techs, who unfailingly matched the setting to the psychedelia in the music, the crowd was just about done with Vinyl Williams’ “transcendental pop” and antsy for some UMO.

Literal drum warlock Riley Geare was the first to brave the stage to assemble his set amid screams of anticipation. Soon after, bassist Jacob Portrait, keyboardist Quincy McCrary and front man Ruban Nielson joined their percussionist for a quick tune-up … or was it even a tuning session at all? Even their sound check sounded like nonchalant yet expert off-the-cuff jamming, transitioning seamlessly into opening song “Like Acid Rain.” By the time they were throwing their second song back to “From The Sun” off of 2013 record II, it was clear that even the band was surprised at the noise and overall hype emanating from the modest crowd that SOhO allowed. Nielson’s half smirk stuck throughout the band’s mid-song jam as body parts groped at him from the crowd and concertgoers took deep, arm-waving bows in his direction. When the singer’s mic failed during “How Can You Luv Me,” a girl literally climbed on top of me to catch the attention of the closest person of authority — who just so happened to be bassist Portrait — to make sure we wouldn’t be without his voice for too long. “We know,” mouthed Portrait consolingly, but it hardly mattered. Though Nielson’s vocals were back in a flash, the devoted audience was doing a perfectly good job of filling in the blanks.

“Man, fuck Coachella. This is the show right here,” Nielson said after a particularly funky and particularly crowd-wooing rendition of “The World Is Crowded.”

It really was no wonder that showgoers were worshipping the man, what with the front man’s signature third-eye tattoo peeking out of the collar of his baggy garb with every twist, turn, dip or unclassifiable dance move during the many mind-blowing solos and musical improvisations. These intra-song jams are what make a UMO show. The talent of each individual band member is remarkable, but, somehow, they come together to form something greater than the sum of their parts. One second, the crowd is singing the familiar guitar riff of “So Good at Being in Trouble” and the next, McCrary has transported us to a jazz cafe with the simple tap of a few keys.

Undoubtedly, the highlight of the show was marked by the reintroduction of Vinyl Williams’ guitarist/keyboardist. It wasn’t so much that we missed the opener’s musical stylings, but more so that this meant Nielson was free to roam the crowd with just a mic as he sang “Stage or Screen.” In that moment, selfies were taken, tears were shed, lives were changed. It’s quite possible that my soul left my body when I brushed Nielson’s shoulder.

In any case, the manhandled and shaken but happy-looking singer made it back to the stage to close with “Multi-Love.”

“This song is too real,” yelled someone who was either close to tears or had simply tired out their voice so much from screaming that it cracked mid-sentence.

Of course, what’s a show without an encore? Unknown Mortal Orchestra didn’t keep us waiting too long for two hits from their most recent album. They saved single “Can’t Keep Checking My Phone” for last, which got everyone dancing in sync, making me seriously consider the soundness of SOhO’s infrastructure and causing me to fear for my life to an extent. In the end, we came out alive, certainly more alive than we had come in.

After the show, McCrary mozied out to the dying crowd to chat up some fans, myself among them. Though the keyboardist didn’t have much to say about their Coachella performance to come the next day, he was happy to share his thoughts on Santa Barbara. According to McCrary, UMO has been playing in Santa Barbara since 2002 and has always recognized it as a hub of enthusiastic fans.

That’s certainly something we can agree on. While I’m sure Unknown Mortal Orchestra’s Coachella performances will be just as good musically, I don’t envy festival-goers. A SOhO packed to the rafters with devoted fans fostered an intimate and excited energy, the likes of which simply couldn’t be matched anywhere else.