The Daily Nexus
Events
Conan Cracks Up Arlington
April 21, 2016 at 5:00 am by Alex Wehrung 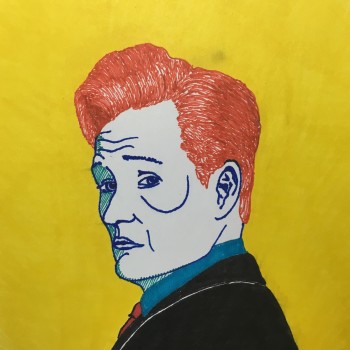 “Thank you for being here, and chill out,” acclaimed talk-show host Conan O’Brien assured the audience after he emerged onto the stage of the packed Arlington Theater to much applause. “It’s all going to be good.”

O’Brien expressed his pleasure in being back in Santa Barbara, noting that once he was chased down by a group of sorority students trying to get pledges. Now he wants to move here.

“People here are so good-looking, and people [at Harvard] look like they’re dying of an 18th-century disease,” he joked.

O’Brien is a graduate of the university, where he was the president of the Harvard Lampoon. During his tenure there, he was arrested by the Cambridge police for hiding all the new issues of the school paper right before its release.

“I learned my lesson and decided to devote myself to comedy.”

Nowadays, O’Brien continues to host his talk show “Conan,” which is currently in its eighth season. He attributes his success to young people, noting that they are attracted to him on account of his weirdness.

“I’m becoming more like Bernie Sanders,” he said, waving his hands in the air. “I gesticulate for no reason.”

To him, young adults have revolutionized his career. O’Brien remarked that the vast majority of his audience comes from people watching clips of his show on YouTube on their iPhones, something he is not at all perturbed about. However, he said that if it weren’t for television, that type of viewership wouldn’t be possible.

“[TV is] the platform that gets me on the other platforms.”

Beside the towering comedian sat Dick Wolf, creator of “Law and Order” (at one point his phone rang, playing the show’s theme) and the partial namesake of the Carsey-Wolf center. He asked O’Brien who he thought was the greatest comedian working today.

“Louis C.K.,” he answered. The audience applauded in enthusiastic agreement.

C.K. started out as a writer for “Conan.” In O’Brien’s eyes, his fellow comedian is so successful because “he just kept doing his thing. He did it on his terms. I believe that is something artists can take solace in. If you stick to your guns, keep doing what you’re doing, be your own toughest critic. This is how it is now. Do your thing.”

In addition to C.K., O’Brien sung the praises of his favorite guests he’s had on his show: the “dead-eyed” Will Ferrell, Key and Peele (whom he referred to as some of the best sketch writers working today) and Samantha Bee, who has recently started running her own show on Comedy Central. In regard to comedians such as Bee and Tina Fey being funny “for women,” O’Brien said that he believes female comedians are being judged for their genders and, instead, ought to be judged just for how funny they actually are.

But besides complimenting his peers and talking about his career, O’Brien also discussed what it’s like getting into the comedy scene. He emphasized that it’s difficult and again emphasized Louis C.K., noting that comics get where they are today by working almost constantly at their jobs, not only writing their own material but listening to others.

“The thing is to absorb. Watch. Be a fan. You have your influences. Absorb [your influence] so it gets into your DNA.”

Toward the end of the event, O’Brien started taking questions from the audience. Two people asked him for selfies and an older man espoused how O’Brien helped him come out of his depression. Also, a future UCSC student charmed the audience when she revealed that her ticket to the event had been a Christmas present.

Another one of the people lucky enough to talk to O’Brien included Matthew Duckett, a fourth-year UCSB history major, who also performs stand-up for Laughology, a weekly free comedy event at Embarcadero Hall. Duckett asked Conan what traits stood out in the comedians he had on his show, to which O’Brien reiterated that the key to success as a comedian is persistence. Duckett vowed to perform on Conan’s show in eight years.

“They say ‘never meet your heroes,’ but I met my hero, and it was everything I wanted it to be,” Duckett said. “To have someone you’ve been watching your whole life and you’ve been idolizing be 30 feet from you, talking to you, taking you seriously, it was nothing short of surreal.”

“I truly believe I am capable of [getting on his show]. But it’s just a matter of — just like Conan told me — it’s all about hard work, just putting your head down and grinding and sticking to your guns in the comedy industry. It’s tough, but if you work your ass off, you’ll get to it.”

After the event had ended, O’Brien left through the back door of the Arlington where fans clamored to get more pictures with him (including an enthusiastic woman who started running her fingers through his hair). As the comic left in his car, his fans bid him farewell with even more cheers.

Alex Wehrung was disappointed no mention was made of Triumph the Insult Comic Dog.