The Daily Nexus
Sign of the Times
A Misguided March
April 21, 2016 at 5:00 am by Gerardo Banuelos 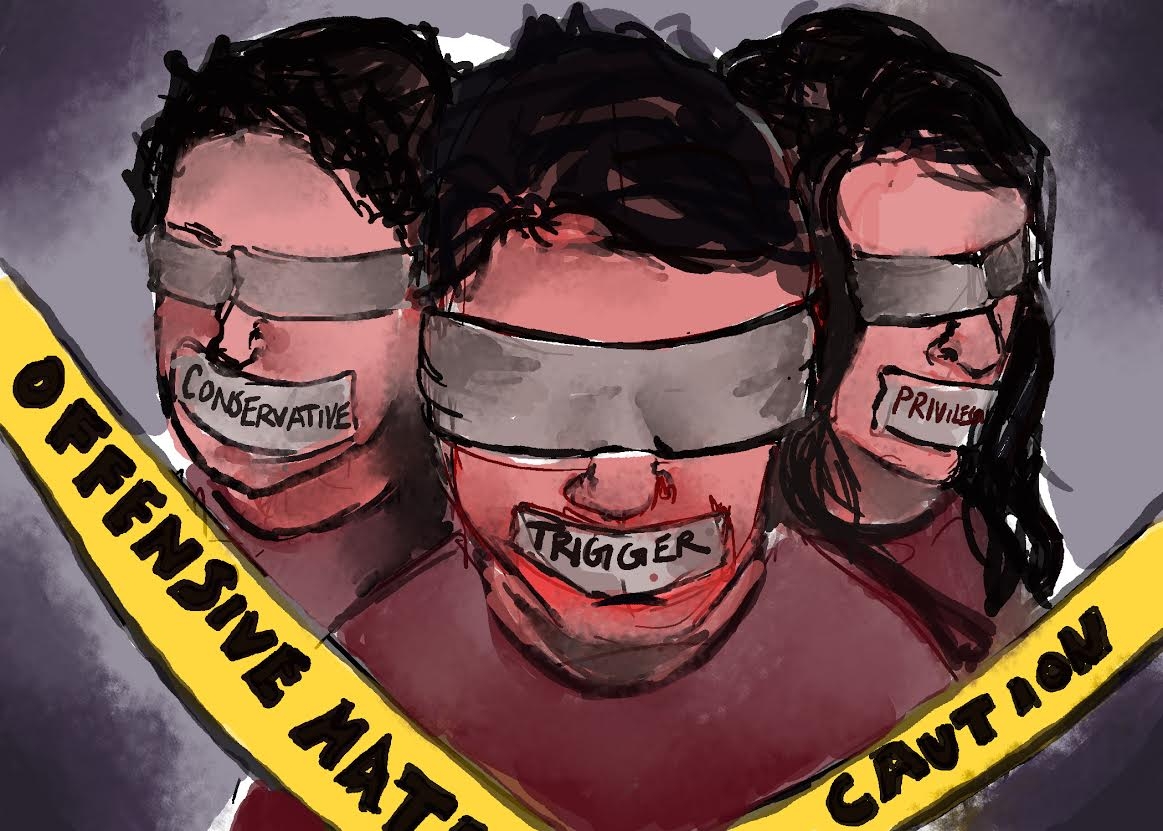 On Monday, March 28, California Governor Jerry Brown signed a bill into law that steadily increases California’s minimum wage to $15 an hour over the next five years. This apparently went unnoticed by Million Student March activists, who on Thursday organized a protest in the name of “Tuition-Free Public Education, Cancellation of All Student Debt, $15 Minimum Wage, Divestment of Private Prison from ALL Colleges/Universities.” According to the movement’s national website, studentmarch.org, Million Student March joined forces “with Black Liberation Collective,” – the group behind the Mizzou Movement – to say “no” to racism and student debt!

The Black Liberation Collective group, of course, is the same movement which, together with student group Concerned Student 1950, demanded the removal of University of Missouri President Tim Wolfe in November 2015 simply because he was white and was benefitting from “white privilege.” According to the New Oxford American Dictionary, racism is defined as “prejudice, discrimination or antagonism directed against someone of a different race…” By definition, the forced removal of Tim Wolfe was racist — all courtesy of the same group that claims to be fighting against racism and claims to be tolerant and inclusive of all backgrounds, creeds and religions, but I digress.

Apparently, words written in chalk now have the ability to grow legs, reptile skin, claws and turn into a college-student-threatening, race-baiting Godzilla.

According to the movement’s Facebook event page, a large focus of the protest was to speak out against the heinous “racist, sexist, Islamophobic, anti-Semitic, homophobic and transphobic” chalk statements that lead to an “intensification” of the campus climate that caused many students to feel targeted and threatened. First off, I seem to have missed the part when an intensification of the UCSB climate took place. Apparently, words written in chalk now have the ability to grow legs, reptile skin and claws and turn into a college-student-threatening, race-baiting Godzilla. This is beside the point, though.

As a Mexican-American college student and son of Mexican immigrants, I have experienced racism firsthand and agree that it is absolutely disgusting, and I understand why some groups of students would be offended by some of the chalk messages, particularly the ones with hate speech. However, the great thing about America is that you have the freedom to walk away from something you find offensive, and you don’t actually have to storm around a taxpayer-funded university campus in an angry mob demanding a certain vision of utopia.

The bigger picture is this: just because you disagree with someone’s political views does not mean that you get to shut them up.

It seems that the movement’s vision of utopia is one that amongst many things involves shutting down free speech by virtue of shutting anyone up who disagrees with them. It seems to be an unwritten rule on campus that you are not allowed to talk about politics if you are not a supporter of Bernie Sanders. The more I observed the march, the more this seemed true. When a group of Trump supporters walked up to the crowd outside of the SRB, many of the protesters stared at them in utter dismay, as if they had just committed a murder akin to the assassination of Abraham Lincoln. Some of the protesters then proceeded to cover up the Trump signs and started chanting the magical, “Black Lives Matter! Black Lives Matter!” that is the solution to all that is wrong in the world.

College is supposed to be an environment where opposing ideas and perspectives are challenged, not censored.

The bigger picture is this: Just because you disagree with someone’s political views does not mean that you get to shut them up. The First Amendment was designed to give all citizens the right to free speech, not just those of a certain political perspective. College is supposed to be an environment where opposing ideas and perspectives are challenged, not censored. I don’t recall an outrage arising or any students feeling threatened when Bernie Sanders support was chalked all around campus last October. A protest that spoke out against Sanders, for instance, would undeniably be met with shame and ridicule. Isn’t the main goal of the movement to create an all-inclusive society where everyone is equal and has free speech? I could have sworn I heard these principles being preached in their speaker’s spiel.

I think one of the reasons that my family and other immigrant families came to this country is because of the basic belief that in America anyone from any background can go as far as their talent and work ethic takes them. One of the problems that I personally see with Bernie Sanders’ rhetoric and the rhetoric of some of the left-wing student movements on American college campuses today is it convinces minority students otherwise. It tells us that we can’t achieve our goals because there is some structurally rigged economy standing in our way and the only way we can defeat it is by paying God-like worship to a presidential candidate whose optics rival those of Doc Brown from “Back to The Future” and by thinking that government is the solution to all of life’s problems. Personal responsibility is important, and the bigger issue is that we should not compromise our constitutional liberties in the name of political correctness.

Two ?? up to the author. College students have become whiny wimps who can’t handle an opposing viewpoint. Trigger warnings? I’m reasonably liberal but I find where the social sciences have gone absolutely ridiculous. There’s growing anger towards the reverse racist Black Lives Matter and other ethnic separatist groups. I have no use for BLM because it won’t address the criminality inherent in the Black community nor the genocide it is perpetuating upon itself. If the Supreme Court ties on the challenge to Obama’s immigration executive orders. the DREAMers and their illegal family members can be rounded up and deported… Read more »

Wow you dont even bother to try to hide your racism. Good for you for not hiding what an awful person you are.

Why don’t you come up with a concise argument instead of directly insulting someone you disagree with? It has become way too easy in our society to throw around the racist card and you should understand that you aren’t tolerant until you meet intolerance with tolerance.

I said “inherent” based on statistics. In my city, Blacks make up about 13 percent of the population and commit 40 percent of the Part 1 offenses where suspect descriptions are available or suspects are identified. In addition, supposedly respected members of that community defend gangbanging as part of the culture. Given those facts, I’d say the use of the phrase I wrote is appropriate.

Funny how the protestors claim “black lives matter” yet there was more black babies aborted in 2014 than black babies who were actually born. Apparently black lives only matter for black criminals who go to jail for assaulting cops, and not for black unborn babies. And no don’t frame this as racist because that statistic is a fact.

Its a straw man argument. Abortion which one could debate , is legal and not connected to the BLM issue. Hypocrisy is rampant the right supports death penalty , increase wars but not abortion.

mis interpret statistics if you want but the numbers show black do drugs at the same or lower rates than white but are arrested charged and incarcerated at much high rates.

Another straw man argument ?. My statistics don’t concern drugs. Part 1 offenses are felonies such as murder, assault, robbery, rape, burglary, and auto theft. Drug sales are not Part 1 offenses according to the FBI, which gathers these from local police agencies. Blacks in my city commit these crimes at a rate out of proportion to their population percentage. All other ethnic groups commit Part 1 offense at rates at or below their proportion of the population. Arrest numbers don’t figure into these figures.

You seriously do not understand the legal system if you think that equal fair or show black have inherently more crime.

WOW well said. I love this Opinion piece. Your thoughts on free speech hit the nail on the head. Thanks for having the balls to write and publish this, as a Mexican American student I bet many would expect you to support Million Student March. Great work

the thoughts on free speech are great but when the author says ‘criminality inherent in the Black community’ it show an inherent racist and biased view and ruins and intelligent or quality argument they were able to make. As one who has experienced racism you sure dont seem to under stand it

One, I’m not the author of this opinion piece. Having a little comprehension problem? Two, what some of you consider “racism” is simply life on life’s terms. You get back what you put into it. Third, relying on drug dealing (or getting a pro sports contract) to support one’s self instead of pursuing an education and a career after university sorta proves my other point. I appreciate that the street life is attractive to people who know nothing different but it doesn’t make for a long life-I’m tired of 15 year old kids getting gunned down over street cred. On… Read more »

Unfortunately I can’t edit previous comments. If I come off as not having much patience with Black criminals or a community that defends them, I don’t. My city is home to two out of every 10 gang members nationally. Black gangbangers regularly turn our city into a shooting gallery. The vast majority of violent crime in the neighborhoods surrounding our CSU campus is committed by Blacks. Sorry if I hurt your sensitivities but the truth often hurts.

Beautiful piece. Couldn’t have said it better myself.

You are better than this and dont not have to fall back on racist standards like ” blacks are inherently more criminal than white” to make your arguments.
You absolutely could have said this better
I dont agree but like your writing s this is disappointing

Expected more from you Jason

I expected more from you, Anonymous.

there is literally so much wrong with this article.

FYI, the $15 minimum wage doesn’t include students: “At the UC level, the “UC Fair Wage Fair Work Plan” guarantees that employees working at least 20 hours a week will be paid at least $15 per hour… The fair wage plan does not apply to UC students, however. University guidelines cap schedules for student workers at 19.5 hours per week, rendering students ineligible for the $15 minimum wage plan.”

Unlike at the CSU where student employees will be part of the min wage hike. However there’s a flip side to the story-certain individual campus student fees may be increased to help pay for it.

I’m genuinely confused how a march and a protest are infringements upon your speech rather than an explicit use of their speech? Like sure we have the freedom to walk away from obnoxiously violent rhetoric but we also have the freedom to protest it?

did you even read the article? the writer never says that the protest infringed on free speech

the blatant misinformation on the resignation of missouri’s president is hilarious. you neoconservative freaks need to be more ashamed of your stupidity