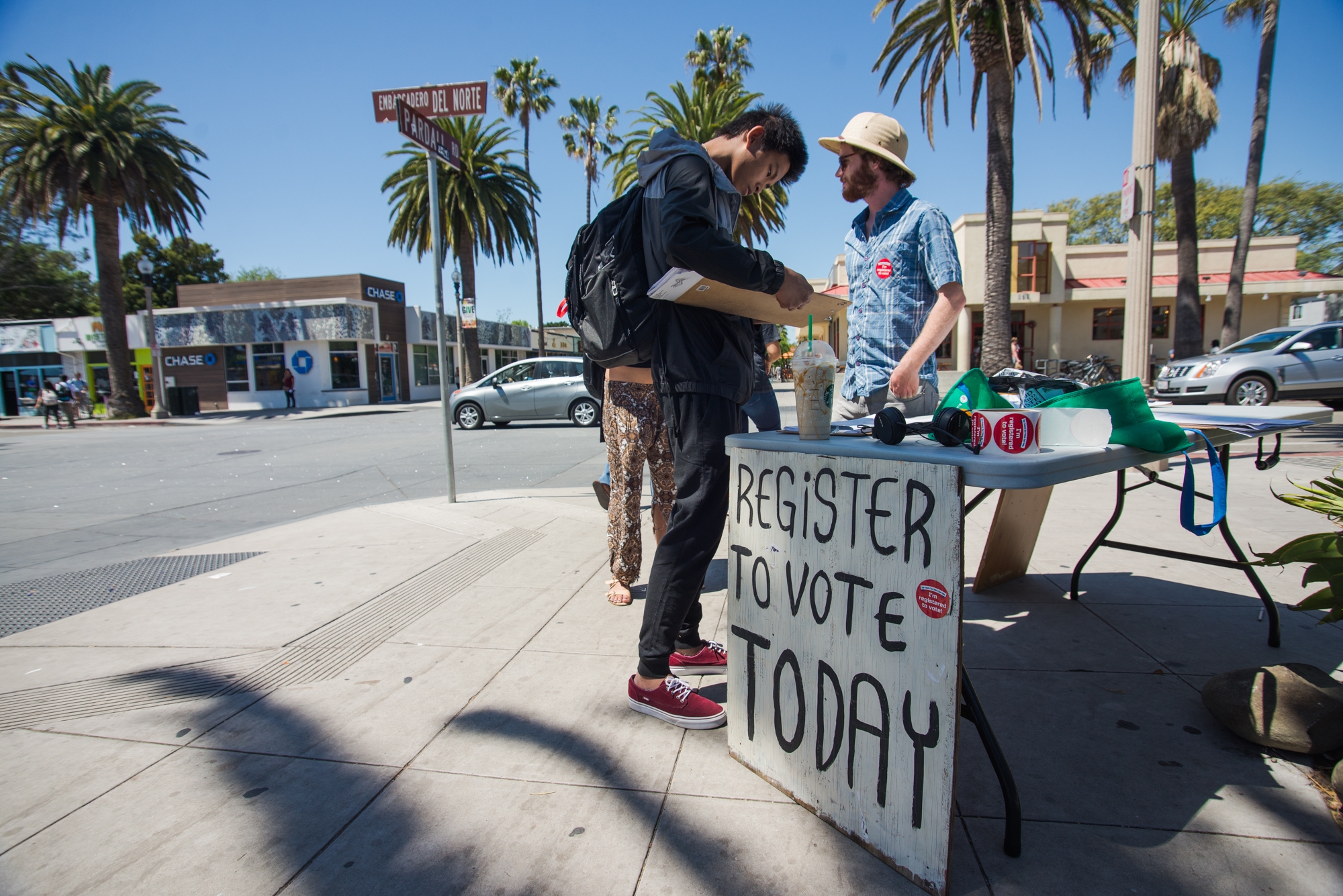 A collective of UC Santa Barbara graduates and politically active locals has registered more than 2,000 Isla Vistans and UCSB students to vote in anticipation of the California primary elections.

Since the first day of UCSB’s spring quarter, March 28, a conglomerate of volunteers has gone door to door in I.V., visited every fraternity and sorority house, approached people in front of Starbucks and tabled in front of the University Center, registering an average of 150 people to vote each day.

The fact that the California primary is on Tuesday, June 7 — during UCSB’s finals week — poses additional challenges to students who intend to vote, according to the volunteers.

“That’s the difference of this drive compared to drives of the past, is that it’s focused on addressing the finals week issue,” said Jonathan Abboud, a UCSB alumnus who is volunteering to register voters. “Our drive is specifically focused on preparing for finals week — making [people] aware of the fact that the election is during finals week so they can choose whether or not to mail in their vote.”

2,685 UCSB students, I.V. residents and people in the “buffer of the university” voted in the 2012 primaries out of 7,000 registered voters. This year, the conglomerate of volunteers hopes to register 8,000 people by May 23, the California registration deadline.

“Isla Vista is a place of transition in people’s lives,” said Jacob Lebell, a UCSB alumnus who is registering voters. “They come here to learn, to find themselves, to let other things go and become the people that they’re going to leave as. One of the things we really hope they become going forward is voters engaged in the political process.”

Lebell is on staff for Joan Hartmann’s third district supervisor campaign, but he stressed that the voter registration effort itself is completely nonpartisan and said they do not ask for whom someone plans to vote.

“Our biggest priority and value — far beyond partisanship — is that people are able to access their rights if they want,” Lebell said. “A person’s vote goes much further here than it goes back home. This is going to benefit I.V. beyond them.” 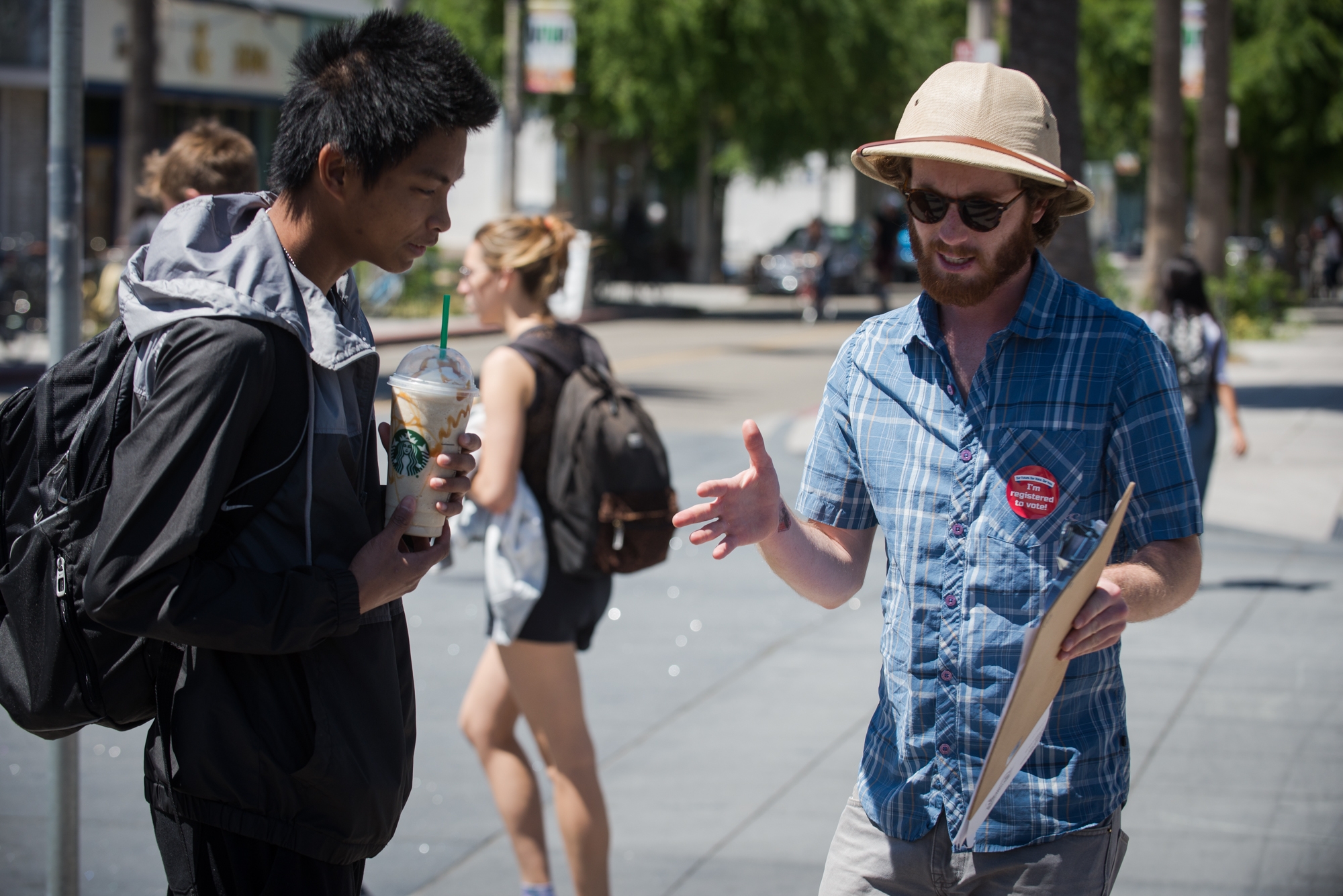 The group relies on more than 100 volunteers who have completed at least one six-hour shift, tabling on campus or walking one of 75 plotted routes in I.V. Even Lebell’s aunt stopped by to help register voters.

Abboud said people are eager to register because of the excitement surrounding the presidential race, but that the goal of the registration is to increase turnout for the third district supervisor elections.

“The main purpose of this voting registration drive is not the president at all, but it’s the county supervisor election,” Abboud said, adding that the third district is “a swing district and the students have a major say.”

Elijah Ettenger, a UCSB alumnus, is working with the conglomerate as a voter register for the county’s Democratic Party. He said encouraging people, especially students, to vote by mail is important, but that simply letting voters know the primary election is during finals week is most vital.

“The vote-by-mail is a component but really it’s about letting [people] know that [the primary is] Tuesday during finals week and letting them make that decision, asking them what works for them as far as getting to the polls,” Ettenger said.

Santa Barbara City College students, for example, will be out of school by the June 7 primary, meaning that many of them need to prepare to mail in their vote.

The registration group is hoping that between 4,000 and 5,000 vote this year, nearly half of which they expect to vote by mail.

After the June 7 primaries, many Isla Vistans will be changing their addresses, meaning that they will need to register again, likely under a different polling center.

“Here, almost everyone moves every year,” Abboud said. “We start from zero on July 1, in our minds, and start again.”

Not sure if you’re registered? Click here to check your status.

Want to help register others? Sign up to volunteer here.