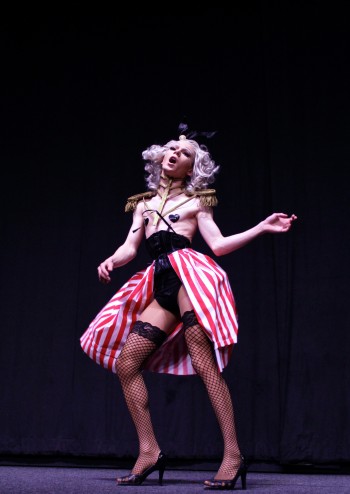 To commemorate the weeklong pride celebration at UCSB, campus organization Queer Commission hosted fellow gauchos to a night of drag-tastic performances at I.V. Theater. At 8 p.m. on a school night, the Student Drag Show 2016 received a line of eager audience members down the block. For those who were lucky enough to obtain a seat inside, the special guest of the night was none other than Derrick Barry of “RuPaul’s Drag Race” and “America’s Got Talent” fame.

Born and raised in Modesto, CA, the Britney Spears impersonator first came to the drag scene in 2003 when he dressed up as Spears for a Halloween night. Astonished by the recognition that he received from strangers, Barry started to perform as the famous pop star. The queen auditioned for the third season of “America’s Got Talent” in 2008 and eventually made it to the quarterfinals. Barry most recently became the 100th contestant on “RuPaul’s Drag Race.” The show is a reality TV competition that crowns a winner as America’s next drag superstar every season.

The first performer of the night, Willow Switch, made her walk down the aisle of the lecture hall to the song “I Like That” by English singer Luciana. Wearing a red bustier and black boots, the curly-haired performer is no stranger to the stage. Having performed in several UCSB drag shows and local events, Switch brings a familiarity to her performance. Up next, the two special hosts of the night, Ellydia Bees and Jenna Scyde, provoked hysterics from the audience with their monologues. A surprise dance group, Clitney Spears, came ready to slay with their choreographed dance routine. With scantily clad ladies and a drag queen of their own, Clitney Spears mixed dance and drag together in one rhythmic performance. A highlight of the night, Vivian Storm’s performance of Beyonce’s live version of “Crazy In Love” brought the entire audience to their feet and dollars flying on stage.

For the comedic tones of the night, Avery Daniels changed up the usual song and dance lineup by doing a stand-up comedy routine. Calling it “the new Grindr,” Daniels spoke of unfortunate yet hilarious experiences using an online dating app. Hosts Bees and Scyde got to perform their own numbers as well, set to Marina and the Diamonds’ “How To Be a Heartbreaker” and Agnes’ “Release Me.” Drag king Jennifuck Binaries went from male to female characters in his lap dance on fellow queen Maddy Mokes. Ms. Mokes herself later vogued, catwalked and duckwalked to Gorgon City’s club hit with Jennifer Hudson, “Go All Night.”

As for the special guest of the night, Derrick Barry finally arrived in a black two-piece outfit alongside a whip, walking to the beat of Britney Spears’s “Circus.” Throughout the night, the Las Vegas performer lip-synched and danced to the pop star’s greatest hits including “Womanizer,” “Hit Me Baby One More Time,” “Work Bitch” and many more. Changing a total of three times, Barry finally finished her performance in a black PVC latex cat suit that resembled Spears’ own costume for her “Piece of Me” Las Vegas show. After the dollar bills had been collected, Barry remained on stage to do an impromptu Q&A with the audience.

When an audience member asked about the experience of taping “RuPaul’s Drag Race,” the contestant shared secrets that most viewers wouldn’t know.

“We are filming 12 hours a day, and every episode takes two days, so for 24 hours of filming, you guys get to see 40 minutes of what happened,” Barry said. “And they have to put in confessionals, shade tree, all of that stuff, so you’re really seeing about 35 minutes, maybe, of what we shot over 24 hours.”

“We’re not really supposed to talk to each other, and we get in trouble if we do. It’s something called hard ice and soft ice,” said Barry. “Hard ice is no talking at all, and soft ice is low voices, and the more we talk, the more we get in trouble. Then we are silenced and have to listen to our iPods and not talk to each other at all while off camera … so it’s like being in prison, ” the 22 year old jokingly told the audience when asked about contestant relations on the show. 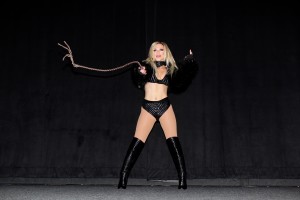 One interesting lesson Barry learned from his time on the show is the need for thick skin. In an episode when the drag queens were asked to personify different characters, Barry refused to do her part because she didn’t feel it was right to perform as an “angry black woman.” As a result, judge Michelle Visage criticized Barry as having no soul, which has led to social media trolling.

“This is the hardest part I’m having with the show so far. Anything the judges say, the people believe, and that’s what I am finding hard to deal with online, because there are so many followers in this world. It’s hard to deal with because it’s comments like that that stick around, and people believe that now I’m soulless,” Barry shared.

Even though the fans of Derrick Barry don’t yet know if he has made it to the coveted top six, the drag queen ensured that one can only tell by continuing to watch the rest of “RuPaul’s Drag Race.” At the end of the day, it was not an easy feat putting on the elaborate student drag show, but thanks to UCSB’s Queer Commission, the show went on without a glitch.