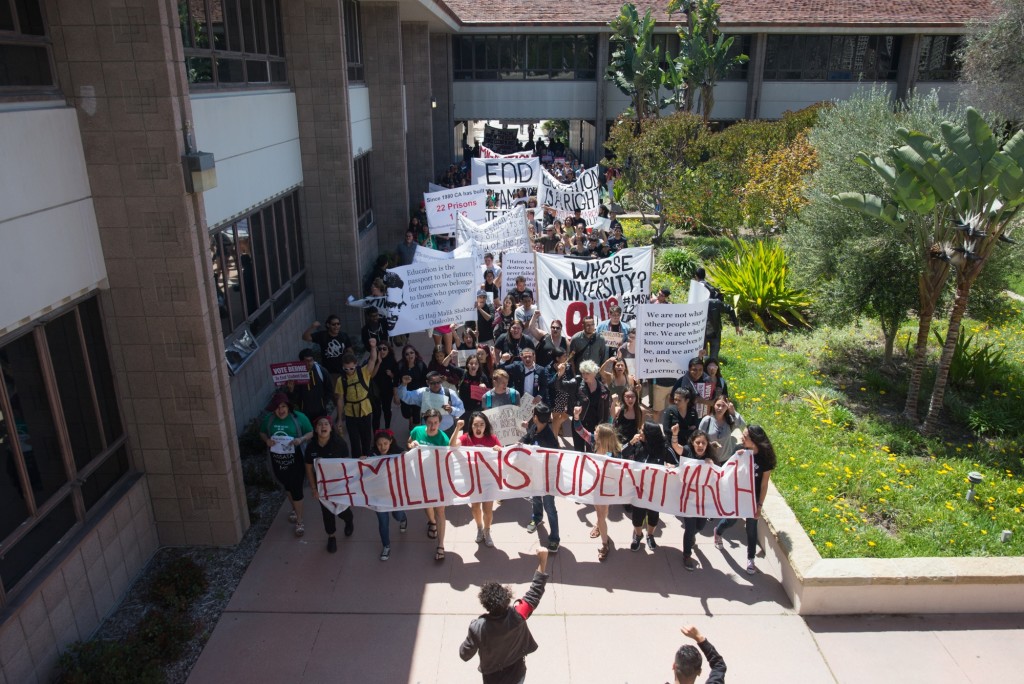 A group of about 300 students brought the Million Student March back to UCSB on Thursday, using the campaign to address issues of racism, student debt and private prison investments.

Students first marched in the nationwide campaign last November, calling for free tuition, the elimination of student debt and a $15 minimum wage for campus workers. As a response to controversial chalk markings that appeared on the UCSB campus, students marched again to “reclaim UCSB,” demanding an end to racism and student debt.

The march began at noon, when students gathered at the steps of the new UCSB library to address a growing crowd. Chants of “Whose university? Our university!” and “UC step off it! People over profit!” rang out through the campus, and event organizers reminded participants to organize peacefully during the event.

Students raised their voices to chant “Black Lives Matter” as they moved past the civil rights murals of North Hall, where pro-Trump messages were written earlier in April. Students carried posters condemning private prison investments and hoisted banners with quotes by Laverne Cox and Malcolm X.

Throughout the march, participants carried several black chalkboards and encouraged students to add phrases that promoted unity and inclusion. 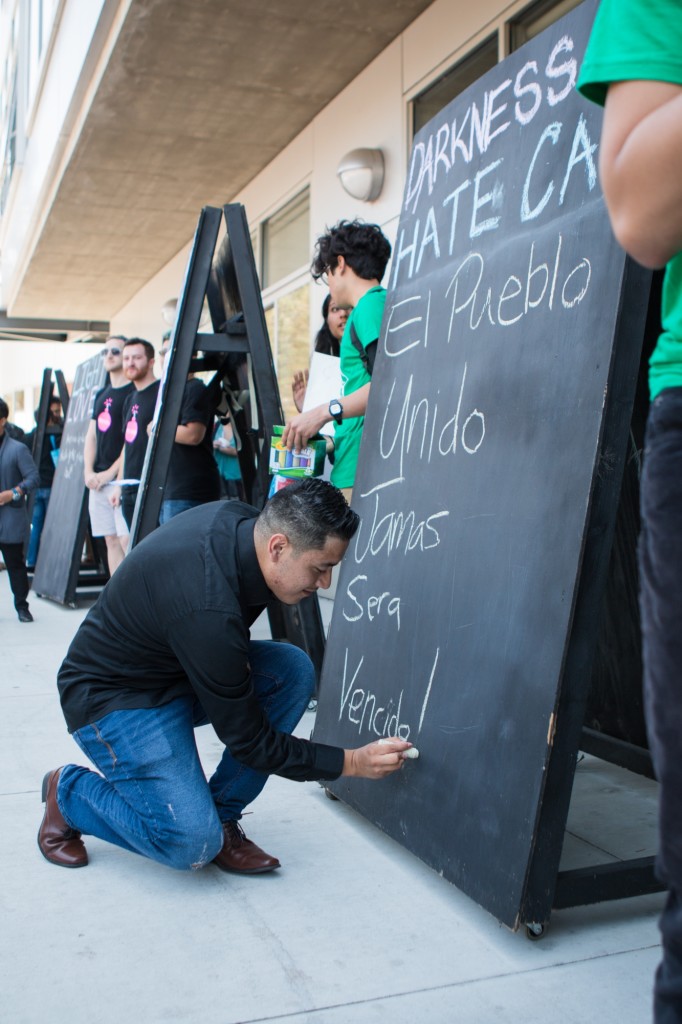 The march reached a climax at the Student Resource Building (SRB), where several speakers gathered in front of the chalk boards to stress the importance of advocacy. Mariel Islas, second-year history of public policy major, spoke about her experiences as an undocumented student, saying students should not be used as “pawns” during political campaigns.

A group of Trump supporters joined the march at the SRB, modifying an initial chant to say, “Whose university? Trump university,” as the march pushed past campus into Isla Vista.

The group remained peaceful for the duration of the event, and Campus Security Officers redirected bikers as the group passed through Pardall Tunnel and marched to Anisq’Oyo’ Park. The students arranged the chalk boards together to read “Darkness cannot drive out darkness, only love can do that. Hate cannot drive out hate, only love can do that,” forming the words of Martin Luther King Jr.

Students have brought the #MillionStudentMarch Part 2 to Anisq’Oyo’ Park, the site of peace protests in the 1970s. pic.twitter.com/uriRjl1BOu

Event organizer and fourth-year political science major Lilly Cain said the goal of the march was to provide support for the targeted communities rather than respond to the chalkings.

The whole thing was pretty embarrassing. The juxtaposition of people trying to talk to employers at the job fair while these people screamed about their oppression was pretty sad.

The closest the march got was to career fair was in front of the UCen, where a muslim student addressed the words “torture muslims” being chalked. “Torture muslims”. I mean, how far does it have to go before someone can get your permission to stand up for themself?

Where was this chalked?

Boy, I know who you are. Just stop.

Hilarious. One girl has a sign: “Beet the System.” Spell check your signs kids.

I think you missed the pun

FREE fucking tuition?! They want to spend FOUR years at UCSB and not have to pay a dime?!?!!!

The upper class of the top one percent of the world are marching through their wealth laden beach-side campus in their expensive clothes and makeup, chanting “OURS!” about things that do not belong to them like toddlers in a candy store.