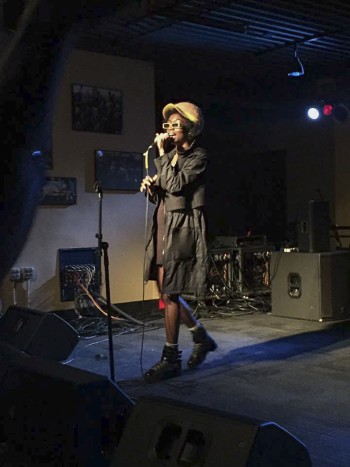 Judging from the success of the UCSB Drag Show the night before that turned away a long line of students after seats ran out, it wouldn’t have been unreasonable to anticipate that the Hub’s free concert to round off Pride Week would draw a big crowd. The concert began with a performance from Kitten, a relatively recent L.A. band who have also opened for No Doubt and Paramore. They were followed by Junglepussy, a New York rapper with a cult following who has attracted the notice of artists like Nicki Minaj and Erykah Badu, and headlining the concert was big-name queer artist Le1f. Le1f’s most popular song “Wut” has over 3 million hits on Youtube, but, based on the turnout on Friday night, it seems very few of them came from UCSB students.

Third-year theatre and dance major Eleanor Gribbin, who was visiting from Davis for the weekend partly because of the concert, was one of many surprised and disappointed by the size of the crowd, which seemed even smaller in the large venue.

“We arrived really early to make sure we would get in and then there was a tiny crowd, which frustrated us,” Gribbin said. “Perhaps the organisers were relying on the ‘big names’ to fill the room for the event, but the lack of promotion just led to the UCSB queer community seeming to be even smaller than I expected.”

It’s possible that this lack of promotion was due to the concert being organised last minute since the Hub website instead said they would be holding an “Education for All Ball” that night, leading to confusion among some attendees. There was even a table at the event inexplicably covered in plastic masquerade masks, possibly intended for this cancelled event.

However, despite the turnout and a fairly late start, everyone involved did their best to make the evening a success. The drag queen emcee did a great job amping up the crowd with her irreverent humour and genuine enthusiasm for the acts, and none of the performers seemed to let the various issues with the event — such as fairly poor sound quality — get to them.

Kitten, the opening act, had by far the smallest crowd and gave an extremely high-energy performance, with lead singer Chloe Chaidez whipping her hair aggressively while singing. As an indie-rock band they were an odd choice to open for two rap artists, but they nevertheless got the crowd moving and cheering even if no one seemed to know any of the songs.

Junglepussy by contrast gave the kind of effortlessly casual performance for which she is known, not dancing as much as the other performers but still a commanding stage presence. Her lyrics are boastful and antagonistic but also humorous enough that the audience is always aware she is playing a character, often one that seems to parody contemporary male rappers. Her playful confidence and unapologetic crassness would be enough to make her charming, but her music is elevated further by her commentary on the reality of being a black woman. Lyrics such as “Compliment her if she’s light/ If she’s black don’t get her hype,” in “Pop For You” send up serious social issues like colorism but in a way that is succinct and punchy.

This made her a fantastic artist to pair with headliner Le1f, whose lyrics frequently address complicated political issues, even if this can sometimes escape notice beneath his incredible beats and rapid-fire flow. His song “Hey” features the lyric “Ask a gay question / Here’s a black answer,” sending up his presentation as merely a “gay rapper” in mainstream media and how the ways in which his sexuality and race intersect are often ignored.

The fact that his delivery is quite low and not so loud meant his performance was the most adversely affected by the venue’s poor sound. Still, Le1f is not only a great rapper but a fantastic producer and dancer and honestly could have stopped rapping entirely and still given an incredible performance. Even his style was impressive — he somehow got his fairly long braids to stick straight up like antennae and his energy only seemed to increase as the performance went on, culminating in him jumping over the barrier and dancing in the crowd.

Third-year theology student Claire Nuttal noted that in this way the small crowd was almost a positive since “the performers capitalised off the intimate setting by interacting with the audience members and joking around on stage.”

“I came expecting great music,” Nuttal said, “but didn’t anticipate the incredible feelings of inclusivity, pride and celebration emanating from the artists and the crowd in equal parts.”