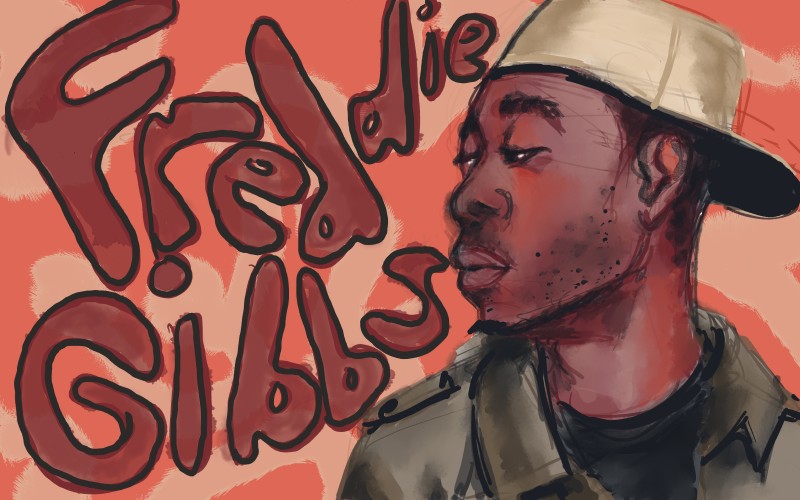 Freddie Gibbs headlined a Thursday show at Velvet Jones, but the tightly packed audience got more than just “Gangsta Gibbs.” An onslaught of energetic openers ranging from I.V.’s own LFTD to DC’s Chaz French got the crowd moshing and sloshing around, ensuring that Gibbs’ crew came out to face a pre-stoked, past-sober pit of party people. But the hyping wasn’t done yet; once Gibbs’ DJ and ESGN (Evil Seeds Grow Naturally) crew got on stage, they played popular hip-hop hits (the word bangers comes to mind) for about 30 minutes before Gibbs came out. This lasted about twenty-five minutes too long, but witnessing an entire crowd sing Kanye’s earth-shatteringly stupid line, “If I fuck this model / And she just bleached her asshole / And I get bleach on my T-shirt / Imma feel like an asshole,” will be forever ingrained in my mind for better or worse.

Even with all the hype awaiting Gibbs, he delivered exceptionally well, coming out all guns blazing with “Rearview,” a song off his newest album with a borrowed hook from Tupac’s “All Eyes On Me.” Like Tupac, Gibbs has been surrounded by drugs and violence his whole life, as is made all too clear from his more “mild” lines like, “My neighbor used to hit my alley just to buy a bag,” or, “Pill habit heavy, hella bars I can’t even count / L.A. County Jail, ain’t got my moms here to bail me out.”

After each song, Gibbs stopped to take off a layer, sip Patron or make fun of his DJ, even getting the whole crowd to chant “chug, chug, chug” as the peer-pressured mixmaster put down half a bottle of Patron. While I was under the impression that this was something reserved for frat parties, it’s nice to see that abusing alcohol is a social class-less (and classless) equalizer. When Gibbs was ready to move on to the next song, he would incite another chant without fail, this one being: “fuck police, fuck police, fuck police.”

Gibbs played all the crowd favorites and even went a cappella on some of them to do the most impressive speed rapping this reporter has ever heard. Despite the dropped beats, the crowd loved it, especially the fan next to me who repeatedly screamed, “I fux wit that,” after every unaccompanied freestyle. Gibbs tucked away this skill during his most popular songs like “Old English” or “High,” allowing the crowd to join him in his anthems to the finer things in life: 40s and blunts.

In short, Gibbs murdered it. Showing more raw energy than anyone who smokes a half ounce of weed a day should be capable of, he supersaturated a crowd that seemed already at full enthusiasm. As a train-robbing, gangster-rapping, ex D1 football player, a less-informed person might make the assumption the Gibbs would come off as the cocky, too-good-for-you type. This person would be shocked to see Gibbs shaking hands, signing vinyls and joking with the crowd after the show. This person would be even more shocked to see the recent cute baby viral video that features “Gangsta Gibbs” as a humble dad (youtube.com/watch?v=_SjcB_PJhB0). A man of many talents, Freddie Gibbs confidently captivated an intimate Velvet Jones crowd; anyone who gets the chance to see him should take it up in a heartbeat.