Another iconic sports figure was lost this weekend with the passing of former Saints Defensive End Will Smith. 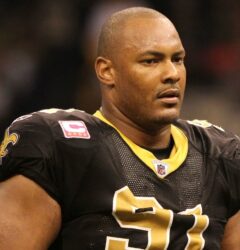 Late Saturday night on the streets of New Orleans, Smith and his wife Racquel were involved in a minor car collision with 28-year old Cardell Hayes.

Smith and Hayes exchanged some words after Hayes’ Hummer H2 blindsided the former Pro-Bowler and his wife while driving their car.

In a senseless act of misunderstanding, police rushed to the scene to find the former NFL player fatally wounded and his spouse in critical condition.

While the alleged shooter Hayes was taken into custody and questioned for further investigation, there is no doubt this inhumane action is an unfortunate one. A remorseful dispute that led to bloodshed, the city of New Orleans grieves the loss of a local father, athlete, and hometown hero in Will Smith.

William Raymond Smith III’s contributions to the Crescent City have been steady since his first day in a New Orleans uniform. As the 18th overall selection in the first round of the 2004 NFL Draft, Head Coach Sean Payton had high hopes for the 6-3 defensive end to develop into one of the elite rookies of his class.

Just trailing AP Defensive Rookie of the Year and eventual teammate Jonathan Vilma, Smith let his capabilities speak for itself recording 59 tackles, 7.5 sacks, and a team-high six fumbles in his first year on the defensive line.

Overcoming the painful aftereffects of Hurricane Katrina, Smith’s leadership in the trenches also permeated through the needy streets of New Orleans. As a captain on the Saint’s defensive front and a community leader, Smith helped revitalized a discouraged New Orleans’ fan base, proving that they were a spirited team and city that could fall and get right back up.

A core part in the Saint’s 13-3 record and Super bowl XLIV run in 2009, Smith’s presence was essential in providing a pulse for his socially stricken Louisiana team.

This sense spirit will be one of many characteristics missed with the tragic passing of the 34-year old defensive end. An individual who inspired progress both on and off the field, Smith brought a vital resurgence of pride in his New Orleans neighborhood.

While this swelling issue of professional athlete’s lives being cut short, Smith’s unethical death and other fellow athletes that have fallen like Sean Taylor, Chris Henry, and Brian McNair serve a purpose in showcasing the delicateness of this present life.

While the presence of Will Smith fades into the distance, his memory and passion on and off the field remain intact.

It was recently revealed through the Saints twitter page that Smith was unanimously voted to be inducted into the Saints Hall of Fame at a later time this year with the revelation coming on May 17th. Due to this unfortunate incident, multiple media formats felt it right to deliver this bittersweet news.

The 34-year old leaves behind a well-respected football career, allocating 457 tackles, 67.5 sacks and one Pro-Bowl appearance in his 120 starts.