ISLA VISTA — On April 9, hordes of high school seniors swarmed UC Santa Barbara following the release of a highly specified virus that scientists are referring to as “LOA.” Students were advised to keep indoors until the threat passed and stay away from significant landmarks and public areas.

As far as researchers can tell, the LOA virus, colloquially known as “letters of admission,” causes the limbic system to take over normal brain functions, placing the victims in a constant state of fight or flight responsiveness.

“Moodiness, anger, anxiety and panic at inappropriate moments are all telling signs of infection. In extreme cases, foaming at the mouth has been known to occur and situations have turned violent,” says Dr. Dean Consejero. “We have found that placement at an institution can help treat symptoms, although some respond badly and develop conditions such as insomnia, depression and a susceptibility to alcoholism.” 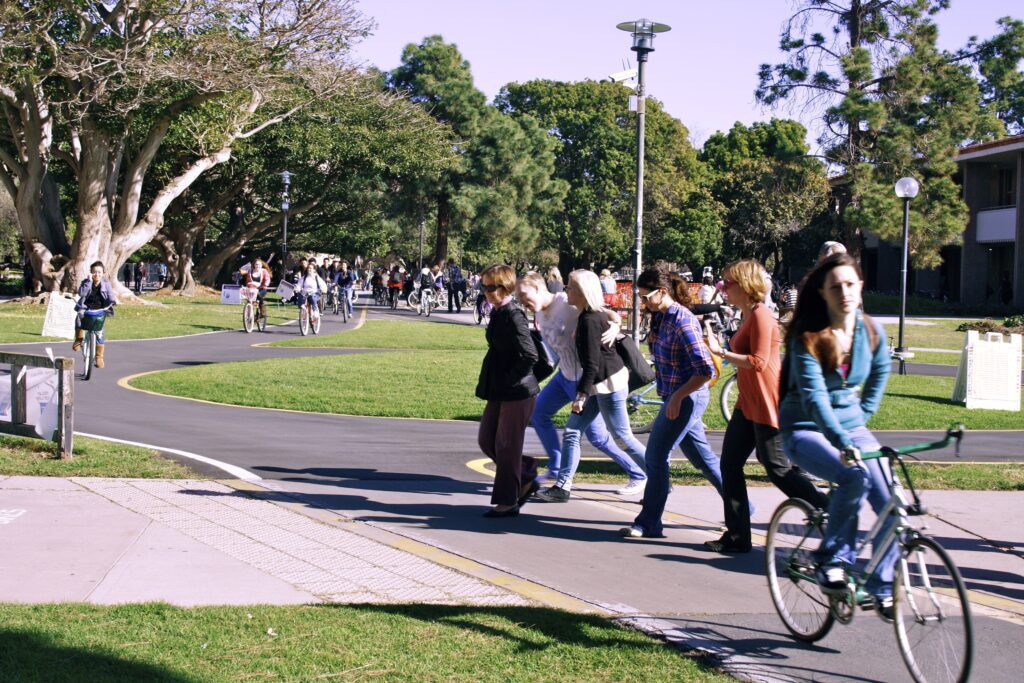 Altercations broke out along the bike paths, which were constantly being mistaken for pedestrian sidewalks. Courtesy of AS B.I.K.E.S.

Valiant efforts at containment were made. The students of UCSB came together to protect their community. Table barricades were erected and placed under constant surveillance, and volunteers were instructed to take any infected people to designated emergency clinics at I.V. Theater and Campbell Hall.

Despite all precautions, the day was not without casualties. The bookstore was overrun and employees were forced to flee as chaos broke out. “It was terrifying. I’ve never seen anything like it,” said student worker Mary Gregory. “It all happened so fast. One second I was restocking notebooks and the next, there was a blood bath in the sweatshirt section. I ran out of there as fast as I could but I can still hear the screams of ‘It’s my life, Mom! It’s my life!’”

Three people were hospitalized, and their current conditions are unknown. The perpetrator was apprehended 45 minutes later in the bushes near the lagoon. Numerous other minor altercations broke out between students and the infected along the bike paths, which were constantly being mistaken for pedestrian sidewalks.

When asked about police involvement in the containment efforts, Officer Mike Hardly said, “We did our best. Unfortunately, the cavalry was deployed to San Luis Obispo this weekend to participate in a parade, and we were tied up with the investigation of a robbery from last month, so there wasn’t much we could do.”

Luckily, the combined efforts of the students, staff and residents of Isla Vista appear to have contained the threat for now. However, residents are still advised to stay alert as more infected are expected to show up over the next few months.

Zoey Brandt is a second year English major who spends way too much time watching stuff about zombies.