An art installment, “Solitary,” which is designed to simulate the solitary confinement cells of American prisons, has been in the University Center since Monday, protesting what some claim to be a UC investment in “dehumanizing” prison systems. 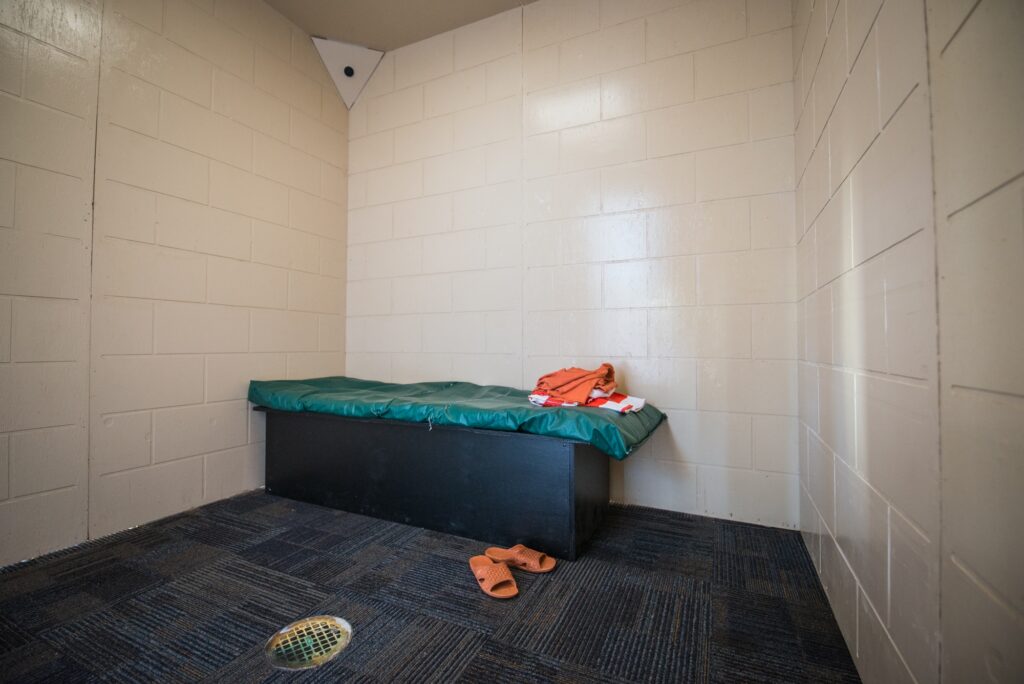 Richard Ross, UCSB professor of art, created the simulation and invited students to enter what is essentially a windowless crate with a miniature bed. On the exterior of the box is text and photographs that are designed to pose further questions as to the ethics of solitary confinement, which is outlawed at the federal level but continues to exist in California.

Brandon Yadegari, chief of staff for the Associated Students external vice president for statewide affairs, said the installment, hosted by “Invest in Graduation Not Incarceration, Transform Education,” starts a discussion on whether or not solitary confinement should be outlawed.

“I think it’s starting a conversation about whether solitary confinement — or any forms of incarceration, period — are appropriate means of punishment for our children and adults,” Yadegari said in an email.

According to Yadegari, the UC maintains $425 million investments with Wells Fargo, which, in turn, provides over $1 billion in loans to private prison corporations. Yadegari said he believes the university is not doing enough to condemn solitary confinement.

The Afrikan Black Coalition, an alliance of Black Student Unions from around California, released a statement in January demanding that UC pull its investments from Wells Fargo.

“There’s an argument being made by top UC officials that the sum of investments there is too great and we are too far removed from the profiting of those same prisons,” Yadegari said in an email. “But money is money, profit is profit, and at the end of the day, we are directly profiting off the dehumanization of millions of lives in this country.”

Yadegari said the UC is condoning a system that destroys black and brown communities, and this is problematic for an institution with a diverse student body.

“The UC-wide call to divest from Wells Fargo stems from the lived experiences of thousands of students at the UC who come from communities that are actively destroyed by the criminal justice system,” Yadegari said in an email. “These folks — most of the black and brown students — recognize that the university is actively complicit in the destruction of these communities and is, in fact, profiting off of this oppression.”

Nathan Moss, fourth-year statistics major, said the lack of stimulation for prisoners inside the solitary confinement cell was particularly alarming.

“Imagine nothing to do … just looking at the wall and being with my own thoughts for 23 hours a day, and [being] fed through a hole,” Moss said. “One day would do enough damage.”

Chadwyck Moore Jr., second-year political science major, explored the inside of the installation and said a lack of social interaction could be harmful to prisoners’ health.

“It was interesting to see what it was really like, and you can definitely see why it will mess with your health,” Moore said. “People are social — we need to see, we need to speak to other human beings — 23 hours in there, I already know I would go insane.”

A version of this story appeared on p. 1 of the Thursday, April 7 edition of the Daily Nexus.