The Daily Nexus
Opinion
The Difference Between Sleepy and Tired
April 6, 2016 at 5:00 am by Anjalie Tandon 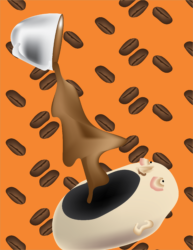 A distinction must be made: Tired exists independently of sleepy.

Such is a truly disturbing distinction.

It can so greatly trouble the mind when there is no trace of sleep deprivation, when there’s a more than adequate supply of caffeine running through your veins, yet still you cannot shake off the tired.

That is when the distinction becomes apparent. A cup of coffee or a nap can wake you up, it can cure the sense of sleepy, but it will not succeed in taking away the tired.

The implications of this kind of insatiable fatigue is terrifying because it has a sort of permanence in the way that it has the power to alter you. It brings the death of motivation, of desire, of mental energy. This kind of exhaustion brings with it the burden of a heavy heart, a tired mind, an unwilling soul.

The other day I was talking to a friend who is soon to graduate. I remember I met him at the beginning of his junior year of college. His plans and ideas were radical, indicative of a nomadic desire. He always spoke of his undying determination to fight the system ’til his last day. One year later, I am talking to him, and he’s telling me he’s tired. He says he now sees the appeal of a nine-to-five job, of a cubicle. So that he can have a weekend. So that he can come home and rest.

He says he’s tired. The past four years have drained him, exhausted him.

What is it that triggers the beginning of this ever-growing lethargy? Do we begin to internalize the complexity of our wants? When do we decide that we can only go on for so much longer? When does making it to tomorrow become our biggest goal?

Is it inevitable that our pursuits will leave us tired? That each next step we take diminishes the appeal of taking the consequent one?

We see it in our grandparents: the tired that comes from leading a long life, the desire for peace, for tranquility, for rest. But are we supposed to be tired from college? Is this normal?

The human life expectancy is rapidly increasing, but the problem lies in the lack of correlation of desire to live those extra years.

Work is work. But when the prospect of doing what you love makes you weary, something is wrong.

What good is another few years if it is without the energy to do even the things you love? That there is the problem. Work is work. But when the prospect of doing what you love makes you weary, something is wrong. It cannot be right to think of everything as a task.

Perhaps a lot of the problem arises from life being treated as a game of connect the dots. Everything is treated as a point. The entire system is preparing us for the next step, the next point. High school trains us for college, point D. College prepares us for the workforce, point E. Then one day we realize that aside from the educational system, the lines lack structure, and there is no definite endpoint; the dots just trail off forever. Suddenly, we see a field of scattered dots, and the prospect of forming the lines is endlessly tiring, so we try to minimize the dots.

Of course, it does make sense that everything is so often taken to be a tiresome affair when it’s considered that so much of life, in this way, is dedicated to work and to obligation. Because all of this school and work and self-advancement is draining, any second that doesn’t necessitate fulfilling obligation suddenly becomes a moment that demands rest, or at least dedicates itself to ensuring that any slight action does not create further obligation. Such is so that your opportune moment of not-work, your break, does not transform itself into yet another task.

In another recent discussion I had, this time with a full-blown adult (self-proclaimed as 40-something years old), we reminisced on just a few years ago when she talked about wanting to travel, to see the world: France, Egypt, Brazil. What she now visualizes this as is a series of flights, luggage problems, jetlag and a risky use of her sick leave from work. A very tiresome affair. Perhaps a dot that can be minimized?

Of course, that’s just a theory.

All I know is that I’m wide awake.

But the thought of three years from now, even of one month from now, exhausts me unexplainably.

I want my fire back.

We have caffeine to fight off the desire to sleep.

But how do we kill the tired?