The Daily Nexus
Tennis
No. 65 Gauchos With Trio of Conference Matches
April 1, 2016 at 5:03 am by Xavier Cardenas

This past week has been an eventful one for the No. 65 UCSB women’s tennis team as it returned to the national rankings after beating tough teams during the Spring Break, including No. 39 Fresno State.

The Gauchos are now 9-6 overall after winning their last three games with one of those wins coming against the Bulldogs. The victory over the No. 39 team in the nation was the first time Head Coach Simon Thibodeau defeated Fresno State during his tenure at UCSB. 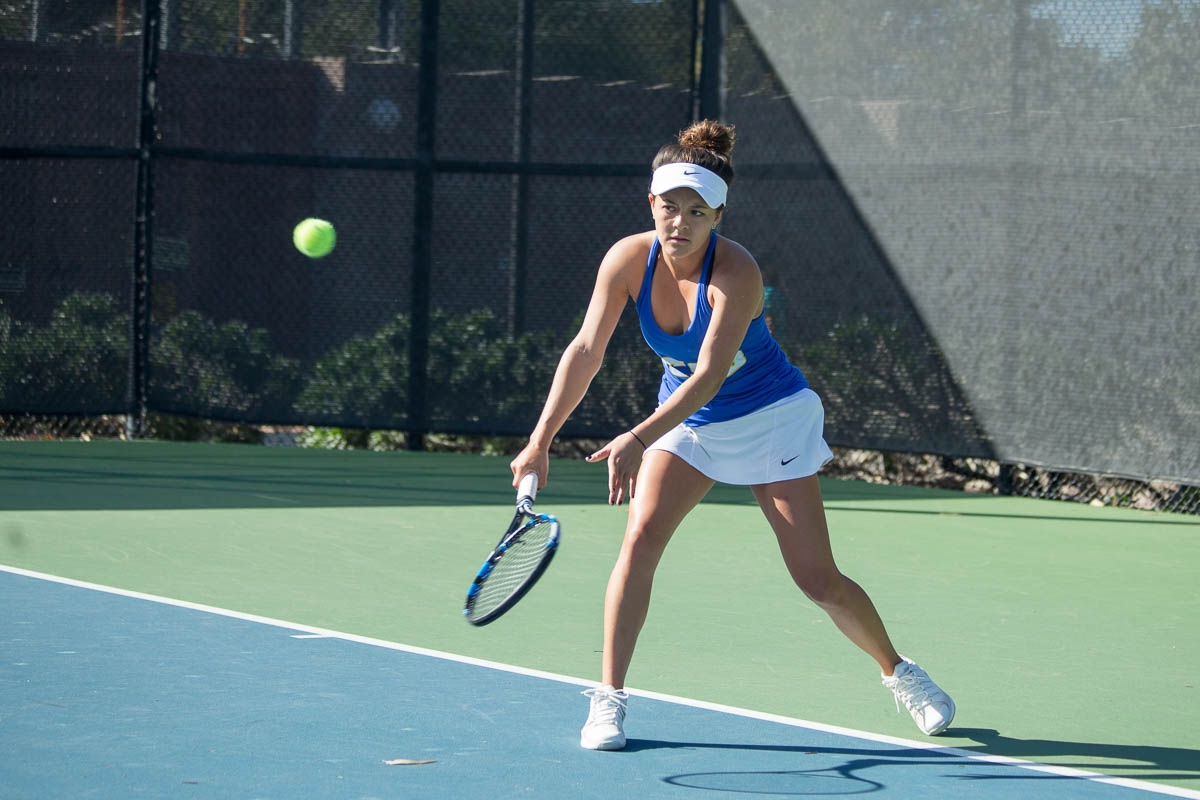 Santa Barbara is 2-8 against ranked teams, yet is 2-0 in conference. The Gauchos are among three teams currently undefeated in conference and will resume Big West play this Friday when they will face off at home against CSU Northridge, No. 67 Long Beach State and UC Riverside.

Northridge has a 7-9 record overall but is 5-5 in its last 10 games after starting the season 2-4. CSUN is currently 2-2 and is fourth in the conference standings after defeating UC Riverside and Cal Poly, but losing to Long Beach State 6-1 and CSU Fullerton 5-2.

Matador standout junior Mickey Hsu is leading the team in wins at 8-7 overall in singles play with all but one of those matches at the first slot. Hsu also is part of CSUN’s best doubles pair along with junior Kristen Poei. Together, they have a 6-8 record in doubles with all the matches played at the one.

Following the Northridge matchup, the Gauchos will play on Saturday against defending Big West champs Long Beach State. The 49ers are currently tied for first with Cal State Fullerton in the Big West, but have played two more games than UCSB so far.

The Niners are 4-0 in conference and have been playing well all year long, as evident with their 11-4 overall record. Long Beach has won eight of its last 10, losing only to No. 3 North Carolina State and No. 9 Pepperdine.

Undoubtedly, this matchup will be a tough contest for both sides, as both teams are only separated by two spots in the national rankings. Even though LBSU boasts a 10-2 record at home, the 49ers are 1-2 away from Long Beach.

Junior Maeva Razakasoa has reached the no. 60 slot on the national rankings for singles, moving up six places from a week ago. The French native has accumulated an 11-3 dual record all at the one, and has won nine of her last 10 played.

She is 2-2 against nationally ranked singles players. Razakasoa also is part of a tough doubles team alongside junior Julie Gerrard; together they both are 9-2, winning four straight in doubles, but have not beaten any nationally ranked doubles pair.

Long Beach also has a nationally ranked doubles duo at the no. 36 spot consisting of juniors Laura Eales and Hayley Thompson. Together, they are 8-2 in duals as a pair with a record of 2-1 against other ranked opposition.

It will undoubtedly be an interesting matchup between No. 36 and No. 11 in doubles, Gauchos junior Stefani Stojic and sophomore Palina Dubavets.

The Gauchos will wrap up the weekend against UC Riverside. The Highlanders have struggled this season to find a consistent winning formula as they currently are riding a five-game losing streak with a 3-10 overall record and 0-4 start in conference play.

Last time these two teams played against each other was last year, and it did not go well for UCR as it was swept by UCSB 7-0. Sophomores Lou Adler and Natalie Da Silveira will hope to continue last year’s newfound success. Adler and Da Silveira managed a doubles win, and the young Brazilian earned a singles victory at the one slot last time they played.

This weekend will be busy for UCSB as it will play against Big West Conference rivals Friday against Northridge at 2:30 p.m., Saturday against Long Beach State 11 a.m. and Sunday versus UC Riverside at 10 a.m., with all games at the Rec Cen Courts.

A version of this article appeared on page 10 of April 1, 2016’s print edition of the Daily Nexus.