The Daily Nexus
Nexustentialism
It's satire, stupid.
IVFP to Ramp Up Security at Deltopia
April 1, 2016 at 10:40 pm by Jenny De La Cuadra 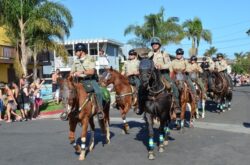 ISLA VISTA– When news broke that horse-mounted police would not be used at this year’s Deltopia festivities, it was met with excitement from local students. The mounted cops had been seen by many to be a needless intimidation tactic by law enforcement, especially in light of the drastically reduced numbers had been in attendance. However, celebration of this apparent détente between local partygoers and police may yet prove to be short-lived according to one source who works closely with I.V. Foot Patrol.

This confidential source has informed me that local police, in fact, fully intend on beefing up their show of force for this year’s festivities by enlisting the disapproving mothers of current UCSB students.  The source claims that this decision was arrived at “after a lengthy discussion with both community members and crowd control experts” in hopes of finding a way to “avoid any unruly behavior without resorting to brute force.” These deputized mothers will supposedly be patrolling Del Playa Drive and the surrounding area yelling at students to “be careful,” to “think of your future” and asking others, “how will you explain this to your future kids?”

Additionally, the moms are thought to be armed with slippers and chanclas. My source went on to assure me that the Mom Squad has been instructed only to strike when sass and backtalk levels are approaching “what they deem to be dangerous levels.”

In response to this possibility, third-year political science major, Derrick Chang said he was disappointed that police would use these tactics, but was “all for anything that avoids violence.”

Others, such as second-year economics and accounting major Cyndi Wright failed to see any positives, and said this move was “a fundamental invasion of privacy” and that it would be “to the detriment of University and student relations.”

Some opinions were rather more concise. SBCC student Kenneth Lloyd simply said, “at least there won’t be as much literal shit all over the roads this year.”

IVFP released a statement earlier today saying, “While we cannot confirm any new security feature for this year’s festivities, we are continuously looking to employ new and innovative tactics to increase the safety of our local community.”