After enduring a narrow 1-0 loss in seven innings of play versus LMU on Tuesday, the UCSB softball team will look to bounce back in its Big West conference opener this weekend. 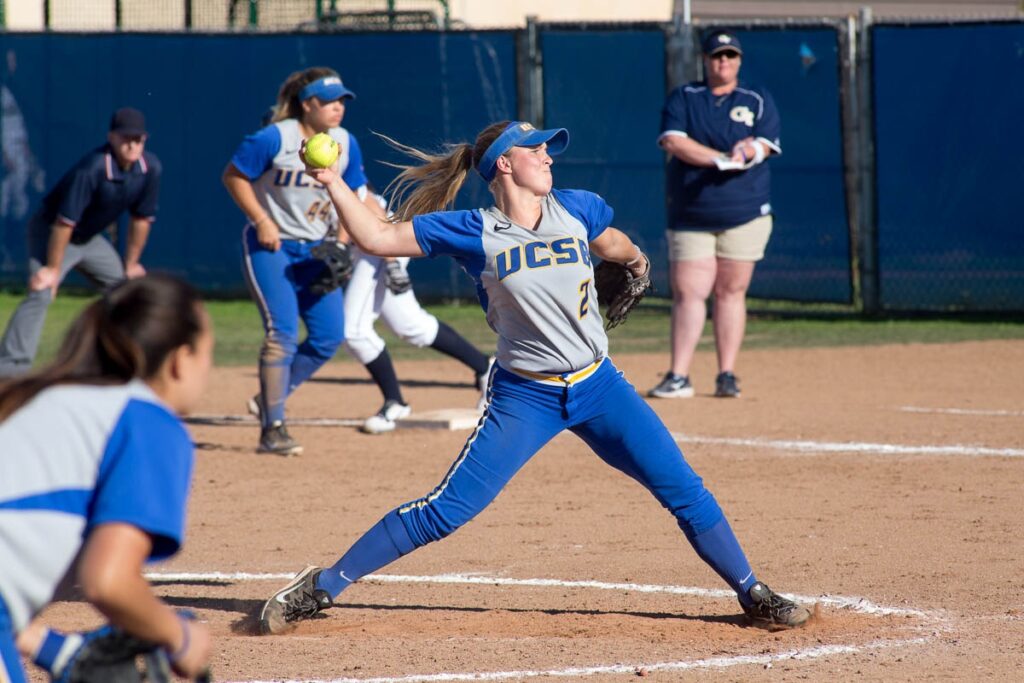 Ashley Ludlow throws a pitch while the infielders prepare for a bunt. Dustin Harris/Daily Nexus

Santa Barbara will host its first conference series of the season, and it won’t be just any series. The Gauchos are set to begin their conference schedule by hosting Blue-Green rival Cal Poly.

Both teams possess different strengths, which should make for an intense and close series. UCSB comes into this weekend’s matchup with a 17-17 overall record. Cal Poly will enter Campus Diamond with an overall record of 16-11.

In hopes of gaining a strong start to conference play, UCSB will look to its powerful batting lineup, which has provided timely hitting on a consistent basis so far this season. Leading the Gauchos’ power at the plate are multiple key hitters who know how to attack each pitch, get on base and drive in runs.

Junior outfielder and leadoff hitter Kristen Clark will be a threat to the Mustangs’ pitching rotation as she brings a lofty .457 batting average to the plate, leading her team. Clark has scored 29 runs this season on 53 hits and leads the team in both statistical categories.

Helping bring in players such as Clark and others for runs has been the production of freshman first baseman Sierra Altmeyer as she currently possesses a team high 26 RBIs.

Enhancing UCSB’s performance at the plate has also been junior infielder Emily Brucelas, scoring a total of 21 runs on 34 hits this season. She holds the fifth best batting average on the team at .321.

The Gauchos face another threat in sophomore outfielder Jessica Johnston, who has lately been a beneficial stimulus for the team. She carries a .362 average and has scored 20 runs on 38 hits, along with 25 RBIs.

As UCSB’s offensive lineup will attempt to sustain its reliability at the plate, the Mustangs pitching staff has managed to hold its opponents to a meager .249 batting average.

Cal Poly’s staff is led by junior pitcher Sierra Hyland, who has worked miracles for her team this year and will pose a major threat to the Gauchos’ lineup.

Hyland throws with an incredible 1.67 ERA, having pitched 100.2 innings and only given up 24 earned runs. On top of that, she has had a total of 154 strikeouts this season. Not only does Hyland lead her team in pitching, but she also holds a strong batting average of .403 and leads the team with 19 RBIs. She has also slugged a team-leading three home runs.

Gaucho pitcher Ashley Ludlow will have to hold her own this weekend as she carries a 2.85 ERA in addition to giving up 38 earned runs in 93.1 innings pitched this season. Ludlow also has an impressive 95 strikeouts this season.

It is always a challenge to predict a winner when these two teams meet, as their intense rivalry makes for great games and has resulted in a nearly even exchange of win and losses in past years.

When the two teams met last year, UCSB only managed to pull out a 4-3 win in a three game series. In both the 2013 and 2014 seasons, the Gauchos managed to win the advantage over the Mustangs with a 2-1 finish in back-to-back years.

A version of this article appeared on page 9 of April 1, 2016’s print edition of the Daily Nexus.