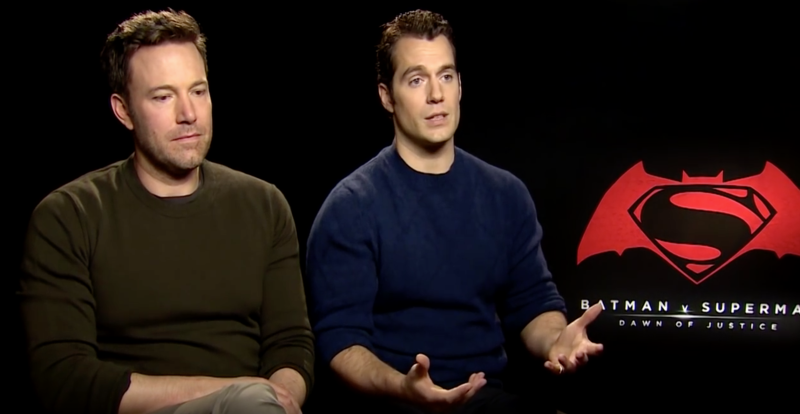 Good lord, what a waste of potential. Who does DC think they’re kidding? Zack Snyder is not Christopher Nolan, and having him return to direct this movie (AND the upcoming Justice League films) is tantamount to quality suicide. Once again we have been given a colorless, joyless, thoroughly flawed piece of work. Snyder’s indifference to his own film can be glimpsed in the opening credits, where “Batman v. Superman” appears in the corner of the frame and fades out in a brief moment without any pomp or enthusiasm.

The basic framework of “Batman v. Superman” is simple: take the fight from the end of the acclaimed The Dark Knight Returns comic, mix Lex Luthor and Doomsday into the mix and profit.

The first problem here is that they forgot to add any dramatic weight to that aforementioned fight, which is orchestrated by the flimsiest of reasons (thinking back, there really weren’t any to begin with) and concluded just as lazily. Ben Affleck’s Batman feels compelled to go after Superman because he had a bad dream or vision or some such unexplained plot convenience that convinces him that he has to kill Superman instead of talking to and/or learning about him. One training montage later, he’s all beefed up to fight the blue boy scout.

Except Superman (Henry Cavill) is not a boy scout. He’s still the pondering, dour Jesus figure from the last movie who engages in some truly awful love dialogue with the ever-annoying Lois Lane (Amy Adams). His character has not a shred of fun in his body, nor wonderment. It’s all angst. At one point, he even goes off to the mountains to mope — something that is apparently supposed to be a big deal, but it’s so rushed and inconsequential that it completely lacks emotional impact. And it seemed more like an excuse for him to have a vision so that a certain actor from “Man of Steel” could cameo.

Speaking of excuses, there’s one specific segment of the film that felt like it was supposed to be amazing and game-changing, but it wasn’t: Batman sends Wonder Woman (who is on the receiving end of a sly panty shot at one point … gender equality!) videos of other superheroes for her to watch. It didn’t serve the plot in any fashion; it was just a gratuitous reminder from Snyder that more films are on the horizon. The screenplay BS is aplenty: Batman and Luthor decide to kill Superman at the exact same time. Superman is framed for killing African mercenaries, incorrectly implying that Superman uses guns and that Americans care about what happens to African mercenaries. There are some appallingly banal lines: “Superman is just a farm boy’s dream,” followed up with, “That farm boy’s dream is all some people have.” It’s as if Chris Terrio took writing classes from George Lucas.

But I digress; let’s address the butchered villains. Let it be known that Jesse Eisenberg’s performance as Luthor is not the problem with his character — it’s that he doesn’t even actually play Lex Luthor. His character is not a cold, calculated weapons manufacturer with an inferiority complex. He’s just some rich brat with a lot of time to kill who happens to speak almost exclusively in metaphor. It’s okay to reinvent a character, but the character we get is annoying, doesn’t talk like an actual human being and has no motivations to speak for his actions. All he needed was to step in crap and we’d have a new Jar Jar Binks.

Doomsday (Robin Atkin Downes) doesn’t feel like Doomsday, either. The significance of his comic book iteration (being so powerful and strong to be able to beat Superman bloody) is lost. It also doesn’t help that he looks and sounds far more like the cave troll from “The Fellowship of the Ring.” As for his creation, it basically just boils down to the so-called Luthor putting General Zod’s body in goo and seeing what happens. Why does he do it? How does he know it will work? Because it was in the script, and that’s more insight than the movie will ever give you.

Now, you might be under the impression by now that I didn’t particularly like this movie. To which I say you are completely right. But “Batman v. Superman” is, of course, not without its merits, of which there are a scant few.

Affleck fits comfortably in his role as Batman (who gets the best action scenes), and having him use a voice-changer to deepen his voice as opposed to emulating Christian Bale was a nice touch. He kicks ass with lethal prejudice, immediately setting him apart from his predecessor. While this lack of qualms about killing is darkly refreshing (and allows for some cool homages to “The Dark Knight Returns”), we are given little insight into what drove him to take such drastic measures.

Zack Snyder is certainly not incompetent when it comes to cinematography — that much can be said. He frames and sets up shots beautifully, and the editing never feels so frenetic that you can’t tell what’s happening in the action scenes.

But regardless, the minuses heavily outweigh the plusses of this film.

If you want to watch Superman combat Doomsday, Luthor or Batman, there are a slew of animated films that you can find on the Internet that will whet your appetite. They’re better written and shorter, too.

Now all we can do is wait and see if “Suicide Squad” will serve as the antidote to the poison that is Snyder.

Hey Alex, While I enjoyed the review, a lot of the things you have against the movie seem to be things you don’t understand as they are references to multiple stories in the comic books throughout the years. This is definitely a good enough reason for a film critic such as yourself to poorly rate a movie because a good movie would give an exposition that wouldn’t leave the audience confused. I’d just like to recommend “The Flashpoint Paradox”, the “Injustice” series/videogame, “The Death of Superman”, “The Trial of Superman”, Batman’s “A Death in the Family”, “Justice League: Doom” .… Read more »

Glad you enjoyed the review! Although in my opinion, your enjoyment of a movie should not have to be based off the references regarding the source material, but rather the film’s story itself. And I felt that this film’s story was told poorly.

And I am actually familiar with almost all the stories you have referenced, barring “The Trial of Superman.”