For college basketball, the month of March can represent many things. This early month of spring can signal a team’s heartbreaking end to its season or contrarily it can be a time that ends with a conference championship and a bid to the NCAA Tournament.

However, as for the UCSB men’s basketball team, this special month represents a simple service—another chance. 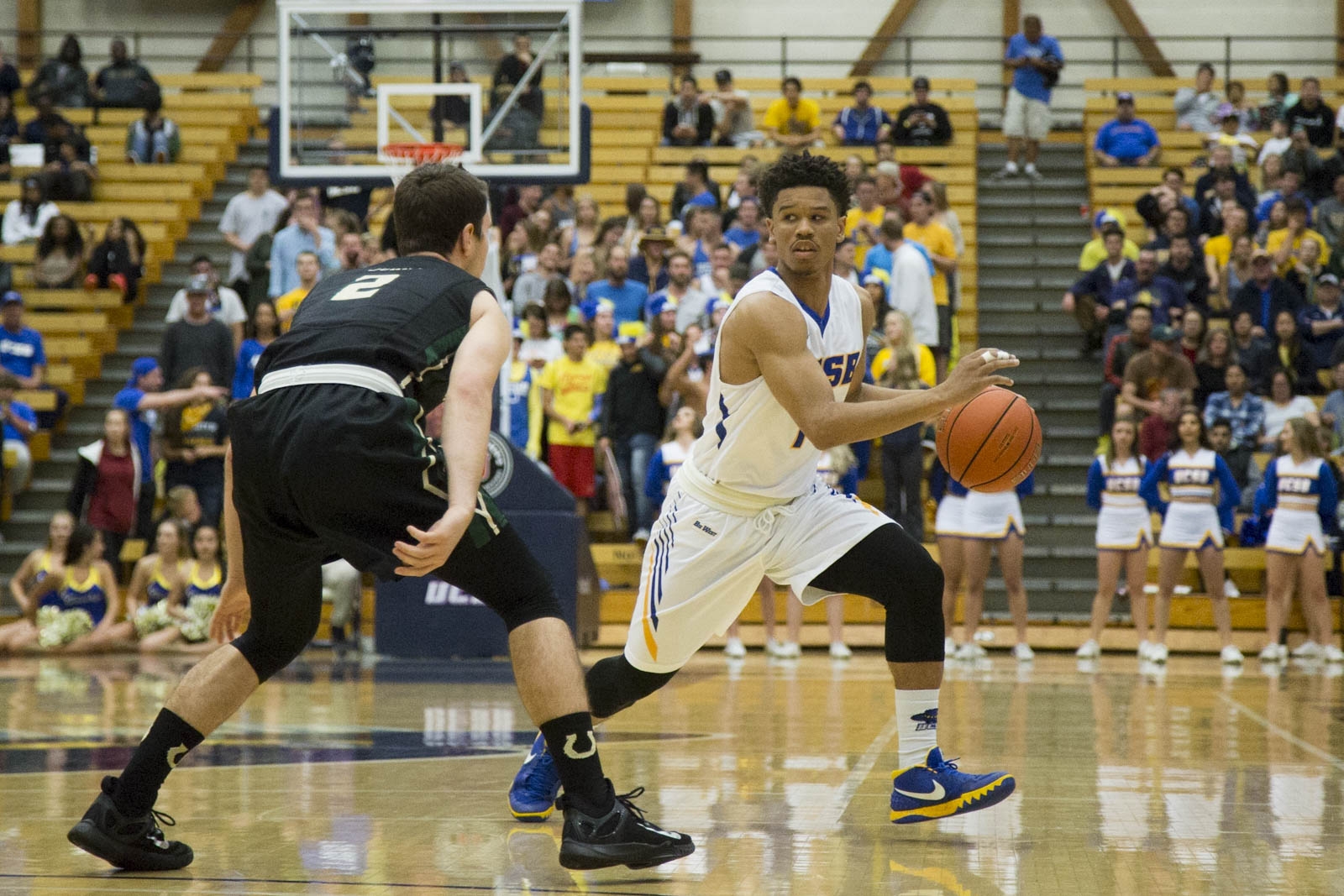 Eric Childress runs the ball around the court to set up a play. Dustin Harris/Daily Nexus

After a 88-76 loss to the 2015-16 Big West Tournament Champions in the University of Hawaii on March 11, Santa Barbara has one more opportunity to extend its season as it will compete in the first ever Vegas 16 Classic against Mid American Conference opponent Northern Illinois University.

The Gauchos head into their Monday night showcase with records of 18-13 overall and 11-5 in the Big West. Coming off a 79-62 loss to Ohio University, NIU heads into Mandalay Bay Center with a respective record of 21-12 overall and 9-9 in the MAC.

Winners of nine-straight before its semifinal loss in Anaheim, UCSB has proven itself as a team capable of finishing strong. Moreover, Santa Barbara has found its spark offensively in the month of March, shooting 48.5 percent from the floor and outscoring opponents by 14.8 points per game.

In fact, in the opening round of the Big West Tournament, Santa Barbara shot 54 percent and went 11-23 from the three-point line in a 26-point victory (87-61) against UC Davis. This matched UCSB’s largest margin of victory against a conference opponent this year.

While their offensive efficiency has been a concern for opposing teams, the Gauchos’ strong play can also be accredited to a pestering defense that is currently +7 in the turnover margin and averaging 15 or more points off turnovers over a four-game stretch.

Junior guard Eric Childress has become a vital contributor to this tenacious defense recording a career-high six steals, four in the first twenty minutes of play, in Santa Barbara’s loss to Hawaii.

With solid performances on both ends of the court, Santa Barbara’s second unit has relieved some pressure in tight situations and been an aid in closing out games.

The Gauchos have increased their bench production to nearly half of the team’s total points, 30.3, during this month. While coming up short in their last game, the second unit of UCSB outscored the Warriors’ bench 26-14 commanded by forward Alex Hart. The second year player out of British Columbia, Canada had his best performance yet scoring 13 points in nine minutes of play, trimming a 21-point Hawaii advantage to eight in the second half.

This mixture of hard-nosed defense, streaky shooting, and bench support will be key ingredients for Head Coach Bob Williams and his team heading into their match against NIU.

As for fifth year Head Coach Mark Montgomery and his Northern Illinois Huskies, they will rely on a talented core of underclassmen to propel their way to victory. A starting lineup that features two freshmen and one sophomore, the Huskies are a scrappy yet disciplined team that can compete against experienced squads.

NIU ranked second in the MAC conference this year allowing just 67.1 points per game. With 6’10 forward Marin Maric and All MAC-Defensive Player Aaric Armstead down low, this duo will try and stymie shooters like Michael Bryson and Gabe Vincent from getting good looks and driving to the basket.

While the Huskies finished ninth in the MAC in terms of shooting production, 72.7 points per game, look for an even distribution of scoring by Montgomery’s starters to carry the load offensively.

Four out of five starters are currently averaging double-figures in scoring for Northern Illinois with Maric leading the pack at 12.1 ppg. The redshirt sophomore from Croatia has tallied home 14 double-doubles on the year, including two 22-point performances this season.

In the backcourt, senior Travon Baker will be the primary player that the Gauchos’ defense will attempt to contain. NIU’s all-time leader in steals with 181 and second in school history with 355 assists, Baker is a savvy guard who can draw double teams and open up opportunities for his teammates.

Guards like Vincent and Childress must do a good job keeping Baker in front and limiting his playmaking ability.

Tip off between the Gauchos and Huskies will take place at 4:30 p.m. CT, 2:30 p.m. PT. The matchup will be broadcasted live on CBS Sports Network.