The Daily Nexus
Sports
UCSB Looks to Keep Improving at San Diego Classic II
March 17, 2016 at 5:10 am by Antonia Bird

The UCSB softball team travels to San Diego this weekend for five big games in the San Diego Classic II. It will be the final road tournament of the season for Santa Barbara. 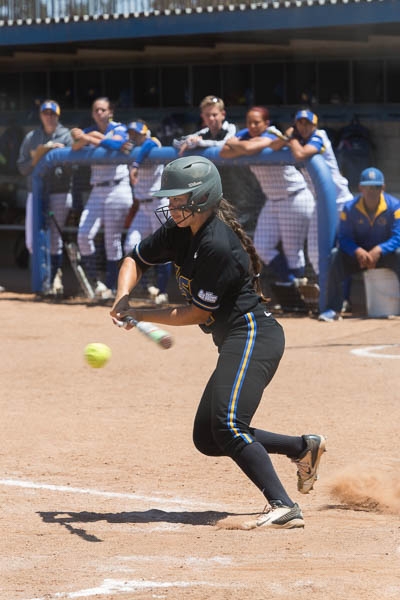 The Gauchos are currently 13-10 on the season, and have won 7 of their last 10 games.  As the half way point in the season approaches, the team is playing well in all phases of the game, and hopes to build on that success this weekend in San Diego.

The Gauchos lineup features 4 solid players who are having great years at the plate. Junior outfielder Kristen Clark leads the team with 40 hits and a remarkable .546 battings average. She also leads the team with 19 runs scored and 10 stolen bases.

Freshman infielder Sierra Altmeyer has been crushing the ball all season and leads the team with 20 RBI’s and 8 doubles, while hitting .343 on the year.

The Gaucho pitching staff is led by ace Ashley Ludlow who carries an excellent 2.07 ERA on the season with a 4-3 record and 61 strikeouts in 61 innings.  Starting pitcher Veronika Gulvin has also pitched very well and has a 4-5 record with a 4.03 ERA on the year.

Both Ludlow and Gulvin have each thrown a no-hitter this season, and they will continue to lead this staff in forming one of the best pitching duos in the Mountain West conference. Santa Barbara has a solid team ERA of 3.59.

In San Diego this weekend, the Gauchos will play 2 games on Friday, taking on Illinois at 11:30 and San Jose State in a night game starting at 7:00 pm. The Illinois Athletics will bring a 14-7 overall record into the weekend, and have a potent lineup led by senior outfielder Kylie Johnson who leads the team with a .379 batting average and 11 stolen bases.

Also contributing is sophomore outfielder Carly Thomas who leads the team with 5 home runs and a brings a .341 average with 14 RBI’s. Their pitching staff is led by junior starting pitcher Jade Vecvanags who is 8-4 on the season with a solid a 2.41 ERA.

The Gauchos then take on San Jose State in Friday’s night game. The Spartans are really struggling this year with a 6-15 record and having lost 8 out of their last 9 games. However, the team is led by outstanding sophomore outfielder Brittany Abacherli who leads in virtually every offensive category including home runs (4), RBI’s (14), runs (16) and stolen bases (5).

On Saturday, the Gauchos play BYU in the early game at 11:30. The Cougars are a respectable 15-10 on the season and have won 6 out of their last 10. They are led by slugging freshman catcher Libby Sugg who has dominated at the plate this year. She leads all BYU players with 12 home runs and 39 RBI’s on the season.

Junior first baseman Ashley Taylor should also be a force as she leads her team with 20 runs scored and 8 stolen bases. The pitching staff is anchored by junior McKenna Bull who is 11-7 on the year with a 3.77 ERA and an outstanding 148 strikeouts in 119 innings.

In Saturday afternoon’s game, Santa Barbara will play Colorado State at 2:00 p.m. The Rams come into the weekend with an overall record of 9-11 on the season, but are currently playing well as they have won 6 out of their last 7 games.

The Rams are led by junior shortstop Haley Hutton who was just named the Mountain West Softball Player of the Week on March 8. She’s hitting .475 on the season and leads the team in runs scored with 19.

Colorado’s ace pitcher is senior Holly Reinke who carries a 2.90 ERA, with 43 strikeouts and a 6-5 record into this weekend’s tournament action.

The Gauchos close-out the Classic on Sunday afternoon with a game against San Diego State at 2:00 p.m.  The Aztecs are a healthy 13-9 on the season, and after a 6 game winning streak in February, have gone 5-5 over their last ten games.

The pitching staff carries a solid team ERA of 3.31 lad by staff ace junior Erica Romero with a 3.37 ERA and a 7-4 record.

The Aztec lineup features sophomore catcher Jenavee Peres who leads the team in hitting with a .444 average and also leads with 5 home runs and 15 runs scored.  Red shirt freshman utility player Katie Byrd also contributes with a .362 average and a team leading 15 RBI’s.

The Gauchos will look to improve upon their solid record in the San Deigo Classic II which is set to start Friday, March 18th at 11:30 am against Colorado State at the SDSU Softball Stadium.