The UCSB women’s track team remains undefeated on the season as it finished Saturday’s all-conference meet at UC Riverside with a 102-68 victory over the host Highlanders and a 91-89 win over rival Cal Poly.

The women’s side dominated a majority of the events at the meet, winning 11 against UCR and nine versus the Mustangs. 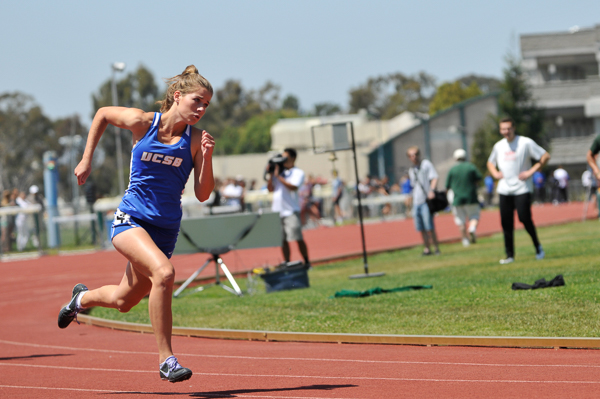 As for the Gauchos’ men’s team, they headed back home with back-to-back narrow losses to Big West opponents that came down to the last events of the meet. They ended up falling to Riverside by just one point, 84-83, and came up short against Blue-Green rival Cal Poly 88-82.

On both of Santa Barbara men’s and women’s teams, senior distance runners led the way.

UCSB senior Andrew Farkas placed third behind Vaziri in the 800m, finishing strong in his first race of the 2016 season.

The Gaucho women also took the first and second spots in the shorter 400m, with sophomore Shamara Carney emerging victorious with a time of 57.13 and senior Hallie Brauner following in at 58.30.

A Rialto, CA native, Carney also placed third in the 200m with a time of 25.55, just behind two Cal Poly sprinters.

In the shorter distances for the men, Gaucho junior Lee Duncan was able to take home a third place finish with a time of 11.14 in the 100m. He also finished fifth in the 200m with a time of 22.47.

In the field for the women, senior Melissa Rake threw a new personal season best 149’0 to take home her 11th career win in the javelin.

Kayla O’Brine threw 42.15m in the discus, good enough for second place for the sophomore from Sacramento.

In the high jump, senior Jessica Emde placed second as well for the women’s side with a jump of 5’7.25. She was followed by freshman Taylor Eddleman, who placed third with a 5’5.25 mark.

For the men’s team in the field, freshmen Brian Yeager and Jacob Rennick led the Gauchos in the triple jump with respective jumps of 45’2 and 45’0.25.

In throwing events for the men, a toss of 51’11 led junior Stephen Leach to a third place showing in the shot put while a personal best 166’7 heave by junior Denley Rodriguez was the best of the day for the Gauchos in the hammer.