It was a dominant offensive showcase by the UCSB men’s basketball team in its 87-61 victory over UC Davis in Thursday’s opening game of the Big West Conference Tournament.

Sixteen first-half points from Michael Bryson along with 13 second-half points from Gabe Vincent helped the Gauchos extend their winning streak to nine games as they cruised to their Quarterfinals win. 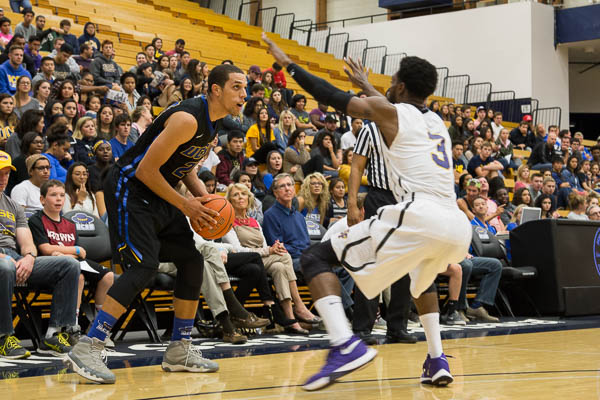 Michael Bryson searches for a way past the defender. Jenny Luo/Daily Nexus

Santa Barbara, now 18-12 overall, currently owns the second longest overall winning streak in program history. Former UCSB Head Coach Jerry Pimm and his 1988-89 team hold the all-time record with 11 straight. After losing its third-straight game to the Gauchos this year, Davis ended the season with an overall record of 11-19.

UCSB established its presence early with its 9-4 lead just four minutes into the first half of Thursday game. It was the fifth straight game in which the Gauchos never trailed.

Hitting a three-pointer during the first drive of the game, sophomore guard Gabe Vincent set the tone for his team. The former Big West Freshman of the Year finished with 20 points off 8-12 shooting. Vincent’s defensive presence aided the Gauchos as well, recording two steals including one off Davis’ guard Darius Graham leading to a fast break dunk.

Quality offensive possessions in the first half were the determining factor for UCSB. The Gauchos went 16-30 from the field, 53.5 percent, in the first period and were able to move the ball around the perimeter and knock down open shots. Head Coach Bob Williams’ first unit was on point tallying 32 of the team’s 42 points in the first half.

Senior Michael Bryson played a large role in this, going 6-8 from the field and scoring 16 of his team-high 24 points before halftime. The All-Big West guard also hit five three’s in the game, knocking down four of these in the first 20 minutes including back-to-back perimeter shots with 6:42 and 6:00 to go. This was Bryson’s ninth game of the season with 20 or more points.

The Aggies showed some resilience however, as a miscue from senior T.J. Taylor led to a fast break dunk from guard Lawrence White which brought the score to 26-20. Santa Barbara then responded, taking a 16-3 run to finish out the first half with a 42-23 lead.

Nonetheless, the Gauchos’ scoring attack remained persistent in the second half. With a 20-point advantage, guard Eric Childress drove to the left side of the rack and converted on a nifty reverse layup.

The junior had a full stat line finishing with nine points, four rebounds, three steals, and a game-high six assists. Santa Barbara is now 9-4 on the year when Childress averages five or more assists.

Senior John Green was effective off the bench for UCSB as well. The forward recorded his fourth-straight double figure performance with 14 points and five rebounds. Green is currently averaging 15.2 points per game in the team’s last four games.

Most notably, the Gauchos outhustled the Aggies in rebounds, second-chance points, points in the paint, and most significantly bench points with Williams’ second unit winning the battle 27-5. Overall, UCSB shot better from the field finishing with a field goal percentage of 54 percent to Davis’ 42 percent and connected on 11-23 shots from three-point range.

In hopes of keeping the game within reach for the Aggies, Bryton Lemar and Siler Schneider carried the scoring load for UC Davis. The two finished with 16 points apiece.

The true freshman Schneider stepped up big for the Aggies, playing 32 minutes and shooting a perfect 4-4 from beyond the arc. The Lansing, Kansas native set the all-time record for the most freshman points scored in team history with 287.

UCSB will stay alive in March, advancing to the Semifinals of the Big West Tournament and will face No. 1 seeded Hawaii. Tipoff is set for 6:30 p.m. at the Honda Center in Anaheim, CA. Friday’s game will also be nationally televised on ESPNU.