Student organizations packed a contentious special Senate meeting in the UCen’s State Street Room on Wednesday as the Associated Students Senate continued discussion of A Bill to Reform Honoraria. 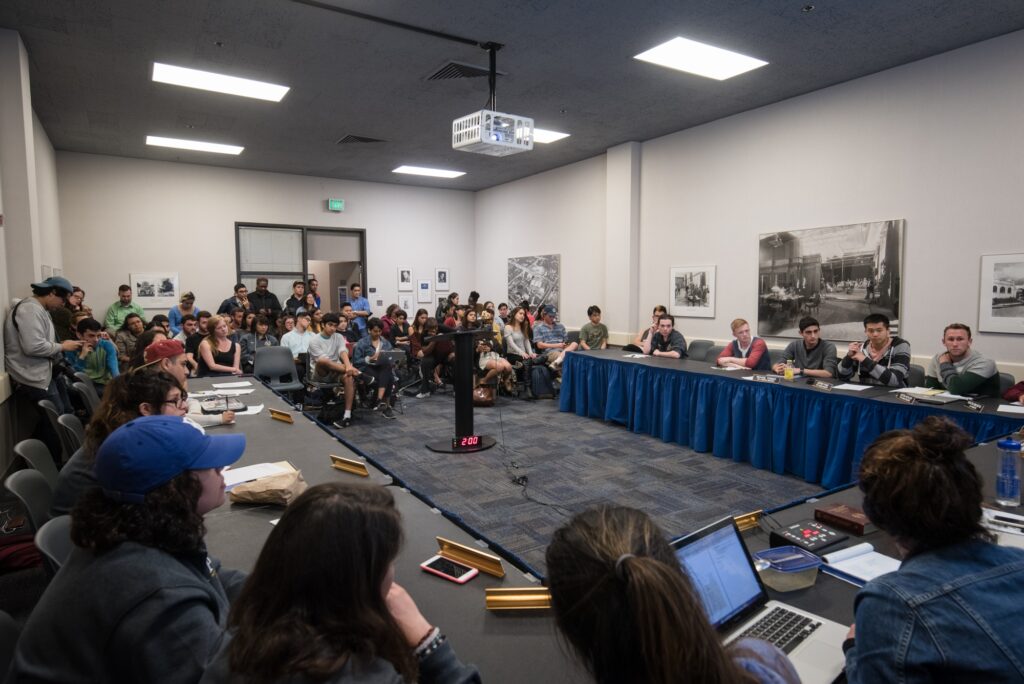 The senate initially passed the bill on March 2, but faced opposition from Boards, Committees and Units (BCUs), A.S. subgroups, who felt Senate had not properly communicated the legislative changes. Honoraria is a system of payment for students serving in BCUs, and College of Engineering Senator Sara Maroofi and Off-Campus Senator Louis Mariano penned a reform of honoraria to accommodate for the limited A.S. budget created by undergraduate fees. Among other bill items, Senate passed an honoraria cap which ensures that general appointed officials shall not receive honoraria higher than $200 per quarter, chairs or vice chairs shall not receive higher that $350 and senators shall not receive higher than $400. Claiming a lack of correspondence with all BCUs affected by the changes, 59 senators and BCU members signed a demand calling for the 66th A.S. Senate to address student grievances in a special meeting and reassess the legislation to table it until Spring Quarter.

Several speakers took issue with the senate’s method of correspondence, and said emailing BCUs the senate agenda was an inadequate form of relaying information. In the demand for a special Senate meeting, signees claimed that senate violated the A.S. 2015-16 Legal Code in passing the bill, because BCU chairs affected by the process were not directly contacted. According to the legal code, A.S. can legally amend honoraria policies every Winter Quarter of an even year after having “written or oral consultation with all parties involved.” 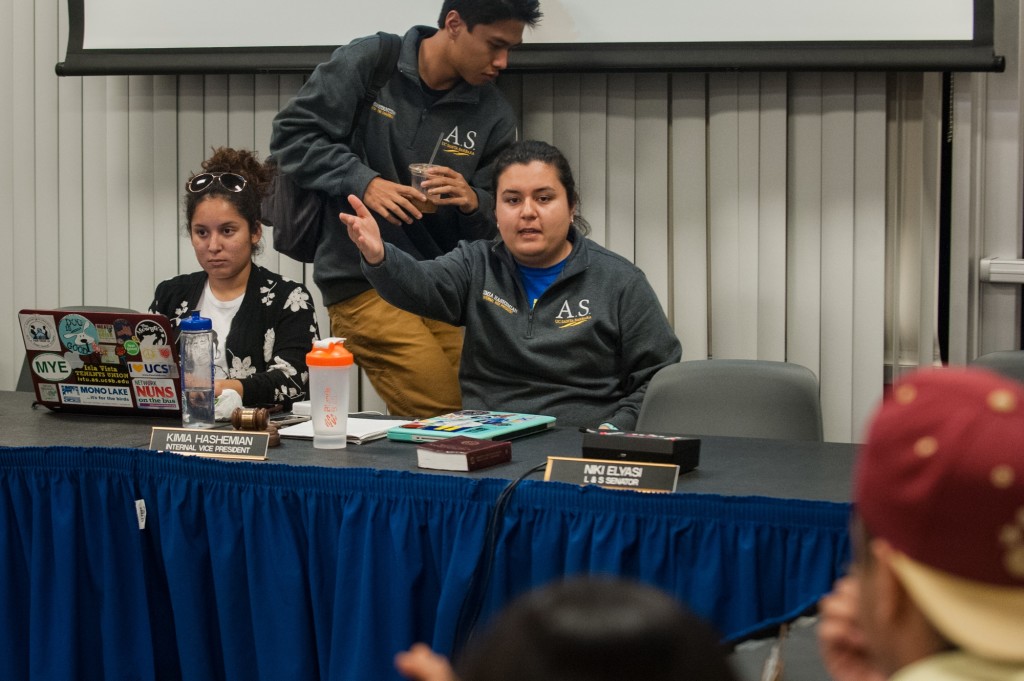 “The fact that you all think this is a communicative process boggles my mind,” Akshaya Natarajan, signee of the demand, off-campus senator and second-year political science and Asian-American studies double major, said. Natarajan insisted that while honoraria changes must be presented Winter Quarter, they do not need to be voted on during Winter Quarter.

“These people are really mad, and if you weren’t able to tell, they’re pretty upset. If we want to foster effective communication, it doesn’t make sense that we’re passing this [bill] this quarter.” Natarajan said to the senate, drawing affirmative snapping and a standing ovation from the BCUs gathered at the meeting. “When we make mistakes, it is our responsibility to apologize, and that’s what we didn’t do last time.”

Do not be confused, fellow senators. We work for them. – Akshaya Natarajan

“How dare you pretend to represent student interests and tell them that no one uses their honoraria for rent, or that they work for us?” Natarajan said. “Do not be confused, fellow senators. We work for them.”

Kimia Hashemian, internal vice president of A.S. and fourth-year sociology major, said the process did not violate the legal code because the BCUs received the senate agenda via email, and that it is the senate-liason’s responsibility to directly communicate information to BCU chairs. Hashemian said the bill passed constitutionally in Senate with a two-thirds vote, and that no students posed an opposition to the issue while it was being discussed in Senate earlier the quarter. 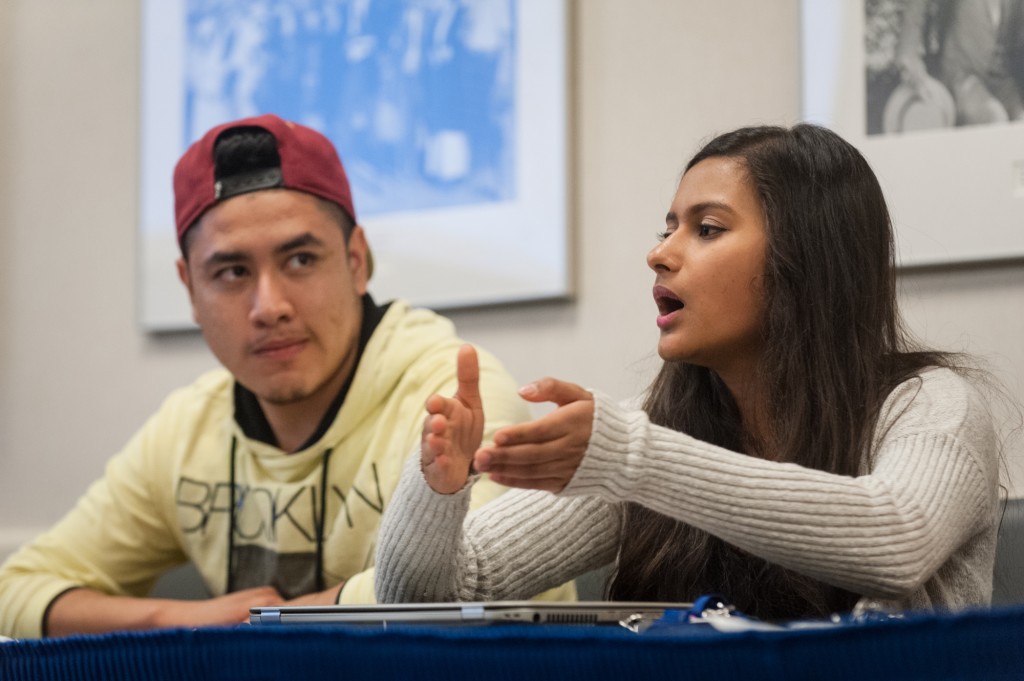 Ernie Piña, external coordinator of Queer Commission and fourth-year black studies and feminist studies double major, referenced a comment made by Mercedes Rodriquez, on-campus senator and second-year political science major, who in a prior Senate meeting questioned if BCU members would be able to use their honoraria for living expenses. Piña expressed distaste with the comment, saying that asking “what are you going to use that money for besides extra stuff” is insulting to those who partially sustain themselves on the payment.

In response, senator Rodriquez said she also worked a part-time job and did not expect honoraria in return for her services to the university.

“I just want to make it clear: Honoraria is not guaranteed,” Rodriquez said. “So the people that come in thinking that honoraria is going to pay part of their bill are coming in with the wrong thought process.” 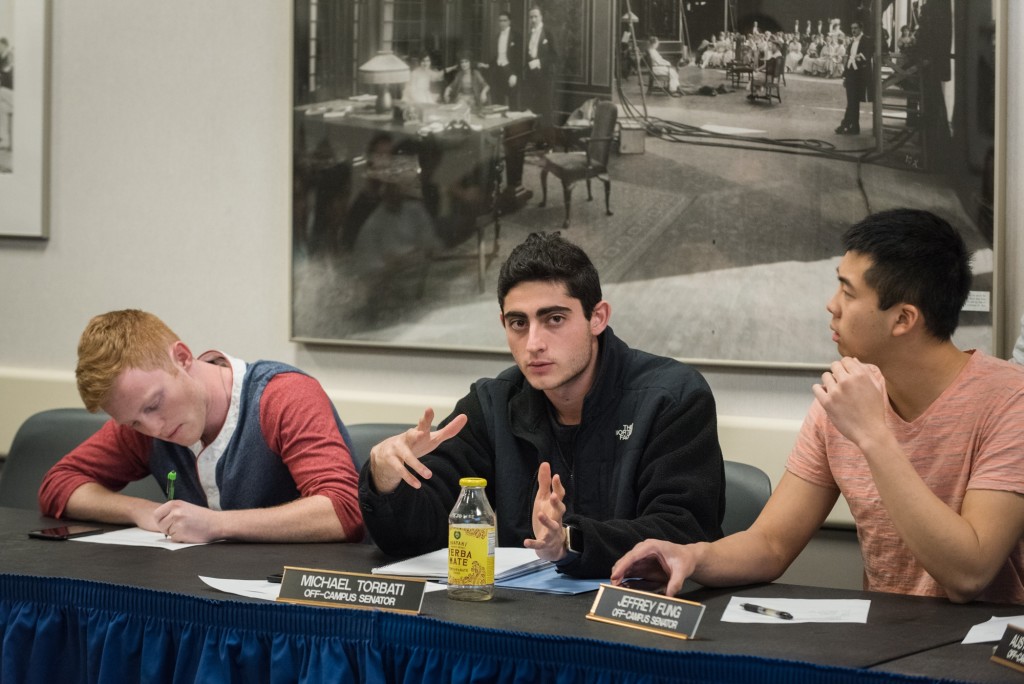 Yanira Jenny Flores, Food Bank Committee chair and third-year psychology major, said she agreed the bill would allow for more student-led programs, but claimed her BCU did not hear about the bill until after it was passed.

“This bill affects all BCUs for the next two years, and it’s troubling to know that all BCUs weren’t aware of this bill until after the fact,” Flores said, adding that the general tone of Senate in listening to student requests was “condescending” and that the BCU representatives “don’t need to deal with that shit.”

Several students raised the issue of senators receiving higher honoraria than BCU chairs, asking whether the system was justified in awarding more money to certain student leaders over others. Unique Vance, co‐chair of Student Commission on Racial Equality and third-year global studies major, urged the senators to understand the value of BCUs, saying that the BCUs support students whose voices “would not be represented otherwise.” Vance acknowledged that BCU workers are aware of the limited student funds allotted to them, but said further capping funds and subjecting students to “barely no pay” was “problematic as hell.”

Kelsey Knorp, fourth-year global studies major and national beat reporter for The Bottom Line newspaper (TBL), said the bill failed to recognize the functions of TBL that are different from other BCUs, “lumping” all organizations together in the legislation. 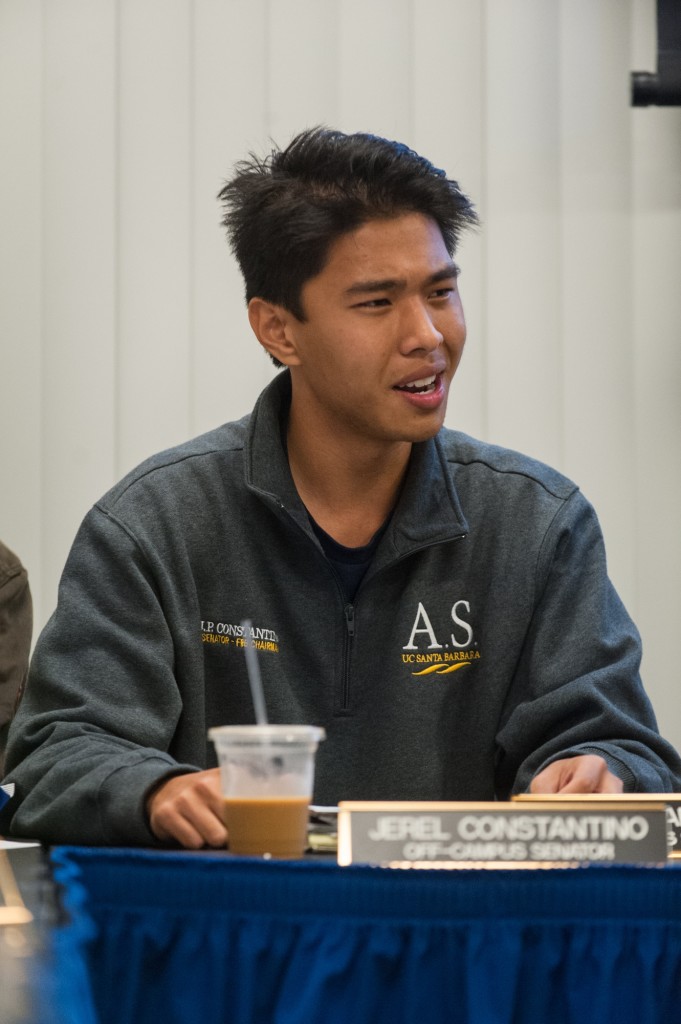 Jerel Constantino, chairman of A.S. Finance Committee and third-year history of public policy and political science double major, admitted to faults in the legislative process, but said fiscal policy is by definition “broad.” Constantino provided a brief history of honoraria, and concluded by saying the senate acted constitutionally in setting an overarching fiscal policy for the whole association.

In response to suggestions of reopening and amending the legislation, co-writer of the bill Maroofi said rather than amending the entire bill, Senate should focus on addressing the portion of the bill that proposes a salary cap. Maroofi defended the portions of the bill that require thorough liaison review processes between Senate and BCUs, but said “we do need to find a better system to hold each other accountable.”

As the meeting pushed past its allotted hour in the middle of study week, senators began to filter out of the room. Niki Elyasi, off-campus senator and third-year biopsychology major, motioned to adjourn the meeting, raising concerns of amending legislation without the full Senate. Alejandra Melgoza, off-campus senator and third-year Chican@ studies major, emphasized the senate’s responsibility as a governing body, saying “even though there are 14 senators, how many BCUs are here?” motioning to the crowded audience.

The number of senators dropped below the minimum allowed for decision making, and Hashemian adjourned the meeting, pushing further discussion of honoraria changes to Spring Quarter. The decision to pass the bill was not changed, but several senators, including Ashcon Minoefar, letters and science collegiate senator and third-year history of public policy major, suggested the senate could write new bill language in the following quarter to accommodate all BCUs.

Excellent reporting! This Bill is a direct breach of the natural autonomy that BCU’s ought to have in order to maintain the integrity of their respective functions. If Senate believes that student-fees are used for excessive honoraria, then they can make that known to the student body at large. That way, the students can decide with their votes what they think of BCU honoraria. That is why elections for re-affirmations exist in the first place. For Senate to come in on its own accord and attempt to regulate honoraria is an outrageous breach of trust and a dangerous precedent to… Read more »

In regards to the comment about reaffirmations: You are misguided. The reaffirmations should not be decided based on operations or honoraria. Students vote for what the lock-in promises; events, services, etc. NOT honoraria, which is not guaranteed- it is a privilege. Some Universities do not even supply honoraria to their student government officers. Furthermore, there would be no way for students to look at how much honoraria each BCU is making, or how much of their budget is designated for honoraria. That is currently the case, but since a legislation that I authored and passed, A Bill to Increase Oversight… Read more »

First, I’d like to affirm that this process could have definitely been done in a better way, like all actions of this association. There was a failure in responsibility on the part of everyone involved with communicating between all sides. This failure has been widely known, as stated in the Strategic Plan, as something that AS should be concerned about and act upon. The concerns regarding honoraria, as we have heard tonight, is nothing new. The same arguments have been heard over and over over the years. The association is only allowed to reform every two years. For the past… Read more »