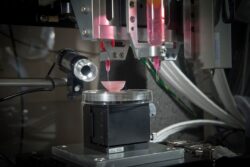 A team at Wake Forest University has refined the process of 3D-printing to create human body parts such as ears, muscles and jawbones, through a combination of living cells and a special gel.

According to the study published in Nature Biotechnology, “The demand for engineered tissues has risen rapidly owing to the limited availability of donor tissues and organs for transplantation. Despite some initial successes in engineering relatively simple tissues, many challenges remain in developing tissues and organs suitable for clinical translation. Three-dimensional (3D) printing technology shows promise for creating complex composite tissue constructs through precise placement of cell-laden hydrogels in a layer-by-layer fashion.”

According to the Abdus Salam International Centre for Theoretical Physics (ICTP), the current 3D-printing industry is built on expired patents for fused deposition modeling, which creates objects out of melted plastic by constructing them layer by layer. Through the open source and from the free sharing of digital files on the internet, 3D printers can easily access the designs and programming instructions needed to build such objects.

“3D printers produce objects using wheels of filaments made of biodegradable plastic PLA (polylactic acid), an environmentally friendly material derived from corn starch, or ABS (acrylonitrile butadiene styrene) polymer derived from fossil fuels,” wrote ICTP researcher Enrique Canessa. “The latter is commonly used to produce car bumpers due to its strength and toughness, as well as the well-known Lego bricks. These filaments melt at about 170 to 250 degrees Celsius to create the multiple layers making up printed 3D objects.”

The Integrated Tissue and Organ Printing System (ITOP) operates on this same principle, combining a biodegradable plastic with a water-based gel containing cells to create 3D-printed implants. When the structures were implanted into animals’ bodies, the plastic broke down and was replaced by a matrix of proteins produced by the cells, and blood vessels and nerves grew into the implants.

“Let’s say a patient is presented with an injury to their jaw bone and there’s a segment missing,” the lead researcher, professor Anthony Atala, said in an interview with BBC. “We’d bring the patient in, do the imaging, and then we would take the imaging data and transfer it through our software to drive the printer to create a piece of jawbone that would fit precisely in the patient.”

The ITOP can use data from CT and MRI scans to “tailor-make” tissue for patients, Science Daily reports. By implanting human-sized ears under mice’s skin, implementing printed muscle tissue in rats and implanting printed segments of skull bone in rats, ITOP has effectively proven that it can generate complex 3D structures. However, though the implants have the same strength as human tissues, the researchers have to wait to see how durable they are before the implants can be put into effect in human bodies.

“This novel tissue and organ printer is an important advance in our quest to make replacement tissue for patients,” Atala said in an interview with Science Daily. “It can fabricate stable, human-scale tissue of any shape. With further development, this technology could potentially be used to print living tissue and organ structures for surgical implantation.”