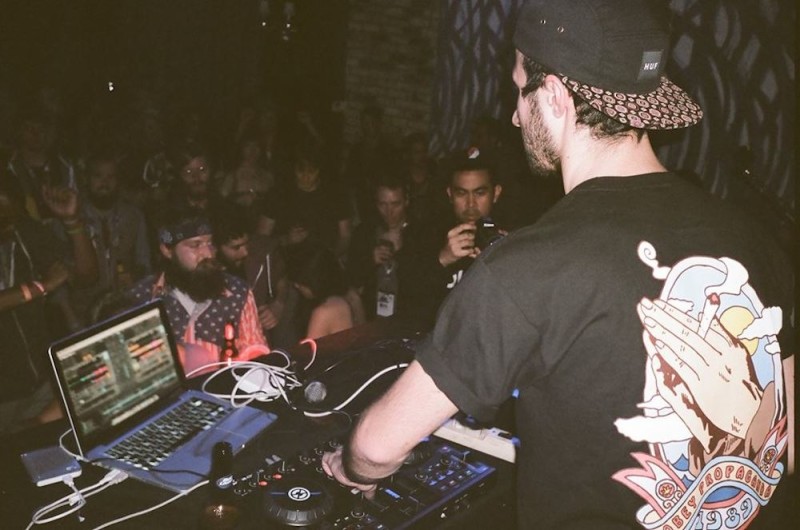 The modern day musician has no stereotypical look. A market that was once controlled solely by major labels now boasts an eclectic mixture of artists that represent the many facets of society. Perhaps that is why Steven Vidal (Stwo), Thursday night’s man of the hour, was able to walk through The Hub and grab a drink 45 minutes before his set, without being noticed by one single person. The Internet has given successful online artists a valuable perk, the option to remain anonymous. While the name Stwo may be recognizable, the face generally isn’t. But this should thrill music fans, as, for the first time ever, pockets of the music industry are being pushed completely by the music. Vidal put on a brilliant show Thursday night, not because of a larger than life stage presence, but because of music that is simply put, good.

Vidal may not have to worry about the same kind of groupie mobs that religiously consume the 10-foot radius of a superstar like Kanye West. However, Vidal’s online presence will give an intrigued fan some fascinating information to latch on to. He hails from Paris, France and currently resides in Toronto, Canada, where he has formed ties with today’s hottest music label, the one and only, October’s Very Own.

Drake’s right hand man and producer, Noah Shebib, known to many as “40,” reached out to Vidal after hearing his 2014 project, 92. A mentor-protege relationship has since blossomed, providing Vidal with a priceless foundation, chock full of industry guidance and knowledge. OVO Sound Radio, the label’s newest project, has featured Vidal’s mixes on multiple occasions. It must be nice to have worldwide exposure at the push of a black and gold colored button.

A little SoundCloud digging reveals a gold mine of Vidal’s work, dating back three years. He clearly favors remixes. However, two EPs titled Beyond and Moans display his ability to create from the ground up. Both projects were released two years ago, and what listeners hear as amazing production is likely viewed by Vidal as child’s-play. Producers learn fast, and with someone like Noah Shebib providing direction, Vidal’s skills have undoubtedly improved drastically since 2014.

Vidal played an hour-long set on Thursday for a handful of UCSB students hoping to escape the quarterly stresses that inevitably manifest around Week 9. Following the theme of his SoundCloud page, he blended a variety of work, from original tracks, to remixes, to untouched party jams. His mix included multiple Kanye West tracks, Michael Jackson’s “Rock With You,” and of course, some Drizzy Drake bangers. A couple remixed tracks that underwent the Stwo treatment included A$AP Ferg’s “Work,” 2 Chainz’s “No Lie” and Sango’s “Middle of Things, Beautiful Wife,” a crowd favorite which deservedly boasts four times as many SoundCloud plays as the original song.

Although his show was all about the music, Vidal’s image was naturally displayed by the way he commanded the stage. He didn’t talk despite the powered on microphone stationed three feet away; he wasn’t tempted to use it until it was time to thank the crowd for their support. His clothing was no different than that of a typical UCSB student. Perhaps this is why he blended in so well amongst the crowd before his set. A 23-year-old rocking jeans and an OVO hat on a college campus doesn’t induce many double takes.

All types of artists have their preferences when it comes to performing. Many musicians, especially DJs, insist on wearing headphones or in-ear monitors to hear with more clarity. Vidal chose not to. Whether the audience realizes it or not, a performer who is hearing the same exact sound through the same exact speakers at the same exact time is providing an indirect sense of organic connection. No headphones means no barrier between audience ears and performer ears. Vidal’s nonverbal behavior provided the audience bond that is typically achieved through talking.

Stwo at The Hub was a special show because it caught a musician in the ripening stages of his career. Those who attended will certainly look at future “band-wagon” fans in a told-you-so manner. With 30 countries toured and counting, Steven Vidal has already built quite an impressive resume. Keep an eye on the Frenchman from The Six; he’s not done cooking yet.

Great review, I could tell he was really enjoying himself up there.