The Daily Nexus
News
National Geographic Photographer Speaks at Campbell About His Work With Big Cats
March 7, 2016 at 3:42 pm by Effie Sklavenitis 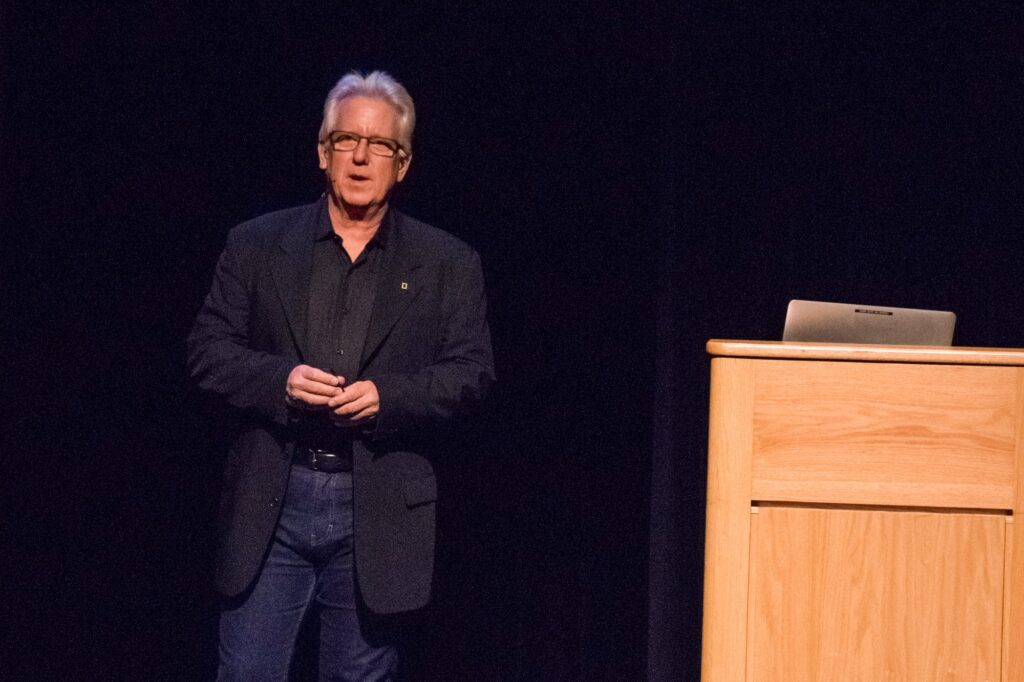 Photojournalist and author Steve Winter presented On the Trail of Big Cats: Tigers, Cougars, and Snow Leopards, a chronicle of his work photographing wildlife throughout the world, during a lecture Sunday at UCSB’s Campbell Hall.

During his lecture, Winter presented videos and audio recordings varying from jungles and mountains in Asia to mountain lions living in Hollywood.

“I did not choose big cats, big cats chose me,” Winter said, adding that he tries to tell the animals’ stories through his photographs.

“If we save big cats, we can help save ourselves,” Winter said. “By saving the large plots of land that wide-ranging predators need to survive, we give them a home, a place to hunt, to mate and a place for the young to disperse. Conservation on such a grand scale radiates outward with global implications.”

“I didn’t know the effect that poachers really had on the environment and how they are tearing everything apart,” Livingston said. “I’m going to do more research on the places that Winter talked about because I’m interested in looking at these foreign places that don’t get much coverage.”

Winter’s expedition into the wild world of cats highlighted his message that there is a global responsibility to conserve wildlife.

“The forests are the lungs of the world,” Winter said. “These are the homes of the big cats, providing the air we breathe, pulling carbon from the atmosphere and slowing climate change.”

“Forests protect the towns and cities around them from flooding, prevent erosion … and provide drinking water for billions of people because forests and grasslands act like sponges,” he continued. “Seventy-five percent of all water in the world comes from forests; 50 percent of the oxygen comes from forests.”

“I loved Winter’s spiel on connecting animals and nature with humans and how we are both part of this network where we can both help each other,” Gorgas said.

“My favorite part of the lecture was when Winter presented the picture of the mountain lion with the Hollywood sign in the background because it was an incredibly moving picture that showed the juxtaposition of wildlife and the city,” Brandwein said. “It showed how close we live to wild animals and don’t realize it.”

Winter urged attendees to understand the ways in which their environment is connected to those of the big cats.

“I hope these stories and images help to inspire you because where there’s life, there’s hope that the time to act is now,” Winter said.

It’s so important for the future of our world that these lectures take place. Thank you for sharing with us.

Thank you for reading! It is wonderful that we have activists who share their passions with us so that we too may learn and act.