The Daily Nexus
Volleyball
Gauchos Struggle Against No. 4 UCLA
March 7, 2016 at 3:15 am by Ryan Burns

With a month remaining in the regular season, the No. 9 UCSB men’s volleyball team lost twice to no. 4 UCLA last week, the first a 3-1 defeat on the road, then a 3-0 two days later back in Santa Barbara. 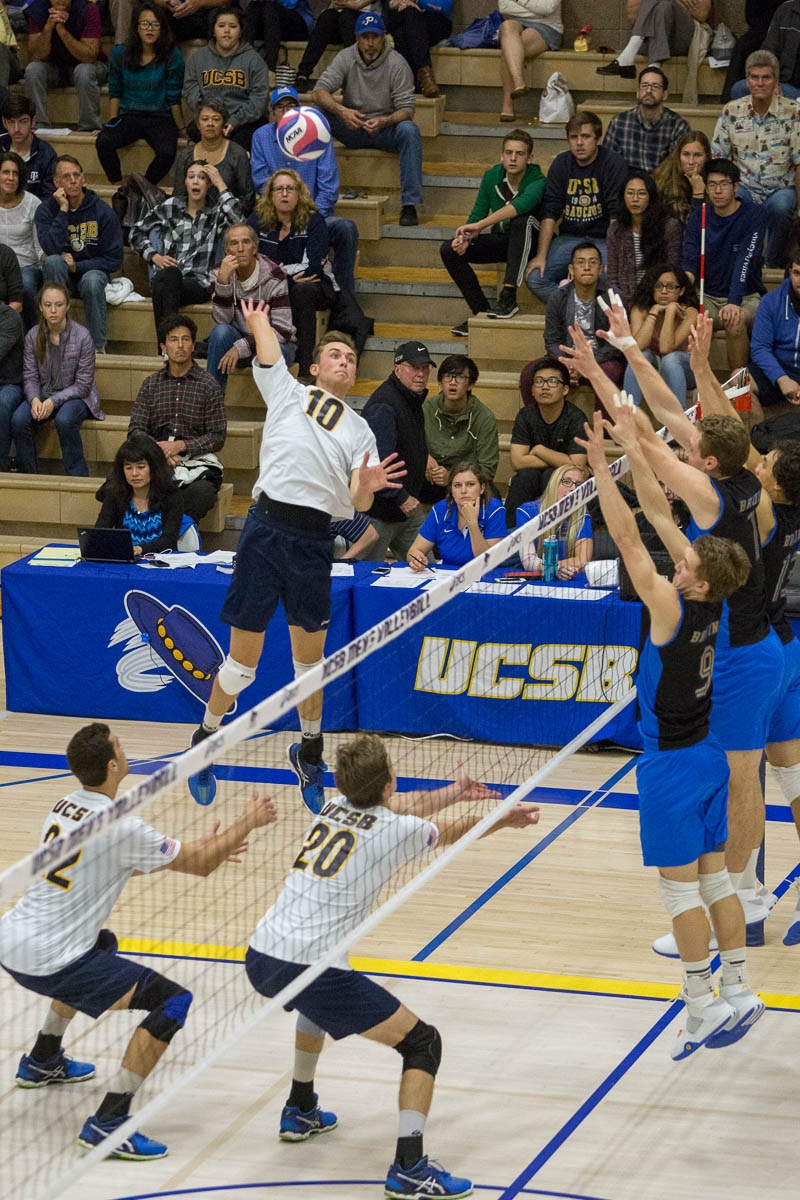 Jacob Delson swings over the block into the back corner of the court. Dustin Harris/Daily Nexus

The losses see the Gauchos fall to 9-7 MPSF, 13-8 overall, and now four games behind UCLA in the standings. The Bruins improved to 13-3 MPSF, 17-3 overall after the two victories and clinched their spot in the postseason, while UCSB is a pair of wins away from clinching themselves a spot in the MPSF tournament.

With playoffs approaching, the Gauchos are working on improving their consistency and team-wide mindset before the regular season ends, though.

“The theme moving on from last weeks games are too have a more competitive attitude,” redshirt senior middle blocker Ryan Hardy said. “We are practicing at a high level but we need to know how to sustain a high level of focus throughout a match.”

Hardy, who has been one of the Gauchos’ steadiest performers thus far this season, picked up four and five kills against UCLA on Wednesday and Friday, adding two block assists in either match. However, even he struggled against the Bruins along with the rest of UCSB’s offense.

Santa Barbara’s hitting percentage in the first match of the week was .186, and things got even worse in the rematch, as the Gauchos hit for a season-low .083. The senior credited the quality of the Bruins team for some of his team’s struggles this week.

“UCLA outplayed us on Friday,” Hardy said. “They served very well and we had a tough time passing making it hard to establish any sort of offense against them.”

The Gauchos were playing without their top hitter for the majority of each of the matches as redshirt junior opposite Matt Marsh, who is averaging a team-high 3.23 kills per set, is fighting back from an ankle injury suffered two weeks ago against USC.

He only played the fourth set in the 3-1 loss Wednesday and was rested Friday, too, but has been practicing with the team and will be hoping to make his return to the starting lineup in the Gauchos next set of games.

Marsh’s presence was missed against LA, but redshirt junior outside hitter Jacob Delson did his best to remedy his team’s lack of offensive firepower, tallying team-high 16 kills, his third-straight match with double-digit kills.

His streak ended Friday, however, when he posted another team-high nine kills.

Delson, like Hardy, recognized the pressure UCLA put on his team, and pointed to a combination of their offensive struggles and the Bruins’ capitalization on key Gaucho mistakes as the difference in the losses.

“We struggled putting the ball away against them mainly in transition, and they made smart decisions in regards to making us make the mistakes,” Delson said.

Following the pair of UCLA games, Delson and co. know they will need to improve in the next couple weeks before matching up against the elite top-four teams in the MPSF playoffs.

“Going into next week, we need to fix our transition swings and work on keeping our focus when the game is close at the late stages,” Delson said.

Next up for the Gauchos is a non-conference home match against unranked Concordia on Wednesday, March 9 at Rob Gym at 7pm.