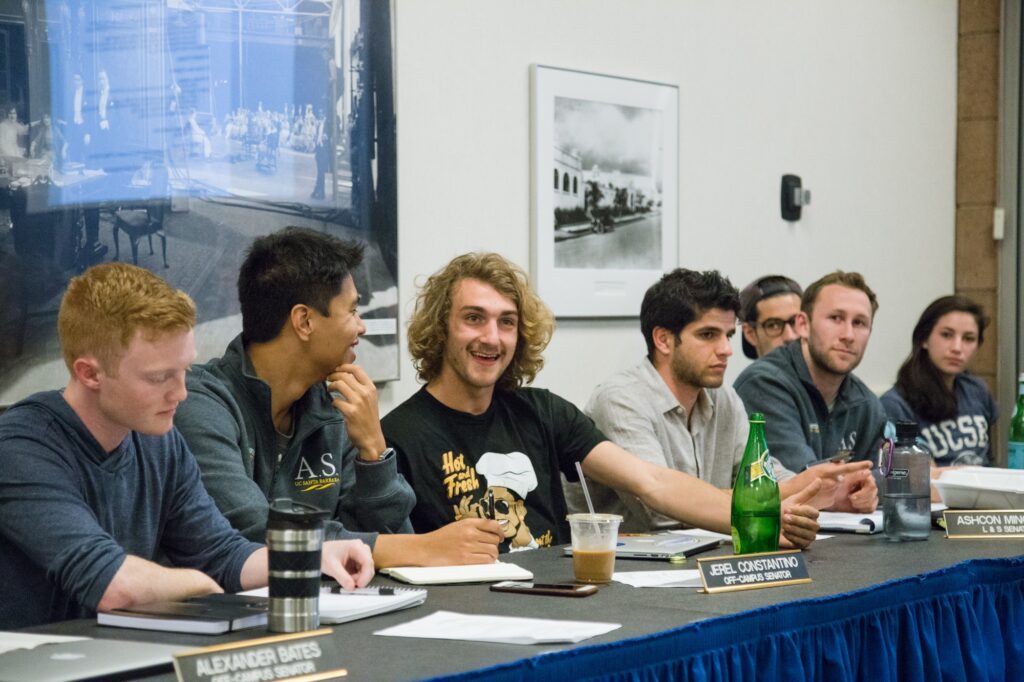 The Associated Students (A.S.) Senate met Wednesday in the Flying A Room of the UCen to discuss resolutions supporting free speech, divestment from Turkey, honoraria reform and implementation of the Single Transferable Vote (STV).

“We had a lot of people, we had several hundred people, sign this ball,” Morse said. “There’s some really offensive things that are written on here.”

Morse said students have the right to express themselves in any area on campus, not only in ‘free speech zones.’

“We have ‘Fuck Trump’ written on here about nine times, because people just really don’t like Trump. We have people that say ‘Fuck Bernie,’ we have people that drew a picture of Mohammed on here,” Morse said. “I mean there’s a lot of really offensive things that are on this ball right now, but it is right of the students to make all of these statements and all of these drawings on this ball, not only in the free speech zones, but anywhere here on campus.”

Sose Abraamyan, vice president of the Armenian Student Association, presented “Resolution To Divest from the Republic of Turkey.” Abraamyan said the resolution aims to hold the UC Board of Regents responsible for investing in country that perpetuates the denial of the Armenian Genocide.

“Along with continued violations of human rights to this day…we want to hold UCSB and the UC Regents accountable for ethical investments of student tuition,” Abraamyan said.

Abraamyan said the resolution is not a “smear campaign” against Turkey.

“What we don’t want to do is target any specific groups of people, culture, religion, language or any student group on campus,” Abraamyan said.

After Public Forum, Senators passed honoraria for the Winter Quarter, which is similar to the system of wage stipends. All senators requested full honoraria of $430, but half did not receive the full amount. Senators may be denied full honoraria due to an absence, speaking out of order or missing Senate retreat.

Louis Mariano, off-campus senator and third-year political science major, said Senate should not support capping honoraria for the specialized side-committees of A.S, which are called Boards, Commissions and Units (BCUs). Mariano argued that certain BCUs currently have the budget for full honoraria and should not be unfairly restricted.

However, Sara Maroofi, engineering collegiate senator and fourth-year mechanical engineering major, said the bill would not go in effect until the next school year, giving BCUs time to adjust their budget.

“This bill doesn’t get put into place until next school year so it doesn’t affect the budget that current BCUs have for honoraria this year,” Maroofi said.

Mathew Burciaga, executive managing editor of The Bottom Line and fourth-year history major, said he was upset by the passing of the honoraria cap.

“I’m disappointed in you as an organization. In my own opinion, you have created an atmosphere of toxicity, pettiness and hyper-partisanship,” Burciaga said. “The fact that none of you have done more than bat an eye at the fact that five of your colleagues are no longer on the table is astonishing.”

Burciaga said Senate did not represent his interests as a student.

“I’d like to remind you of your duties — you are here neither to quarrel among yourselves nor engage in politicking; you are here to represent the interests of the student body and the greater UCSB community,” Burciaga said. “As a student, I cannot say you represent my interests. As a student, I’m saddened to say I’ve lost faith in you as an entity.”

Senate then began a discussion of STV, a ranked voting system aimed at creating more proportional representation. When casting a vote as an STV, the vote transfers candidates as the options are narrowed down. Each voter selects their preferences and the vote abides by these choices as candidates are narrowed down. A.S. will use STV for senate elections starting in spring 2016.

According to Stevan Abdalmalik, third-year political science major, STV has increased voter turnout in places where it has been implemented.

“Every other instance where STV has gone up as the election system, voter turnout has increased,” Abdamalik said. “Voter turnout increases with Single Transferable Vote. What more evidence do you need than all the schools that actually have this, having higher voter turnout?”

“Today will be my final Senate meeting,” Contreras said. “I sent in my letter of resignation a couple of weeks ago to both [A.S. Internal Vice President] Kimia [Hashemian] and [A.S. President] Jimmy Villarreal. I’ve been in A.S. for two and a half years and the dynamics have certainly changed a lot.”

^^^ Austin is a frat douche

all of these ‘senators’ are a joke

will commenting more bump this post? please read the comments below: they are important to this article

I was a former AS Senator two years ago and I’m here with my two cents on some issues mentioned in this article Free speech: This has long been overdue. As much as Jason Garshfield’s articles get on my nerves, he truly is a refreshing voice of reason. Most of the times, he is just as extreme and volatile as any SJW who craps out an op-ed or angry FB post. With this case, he has a very good point in that in our rush to save the minorities of the world, we’ve forgotten to be civil and protect each… Read more »

? These “senators” really think “student government” matters? They think their opinions or votes really matter in the world outside UCSB (or any other campus)? They don’t. AS is a training ground for future lawyers who, when they starve, will try becoming politicians in order to eat.

With all due respect to the grievances mentioned in the article, there is another problem that plagues our UC campuses. That is the problem of anti-Semitism, one that has been all but ignored for years. I believe in free speech, but hate speech must be confronted when it happens. And it has happened all too often on college campuses. The AMCHA Initiative, co-founded by two UC professors (UCLA-UCSC) has just released the results of a year-long study on the link between BDS and anti-Semitism on campus. Sadly, several of our UC campuses are on the national list. http://www.amchainitiative.org/antisemitic-activity-schools-large-Jewish-report-2015 As a… Read more »