The Daily Nexus
Science & Tech
Sylvester’s Guide to Roadside Geology
March 3, 2016 at 6:00 am by Natalie Overton 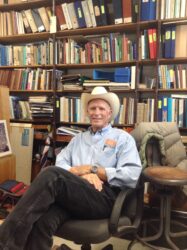 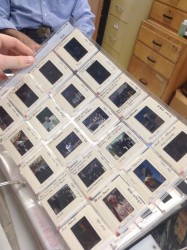 Looking around his office at the stacks of maps, piles of papers and books and binders stuffed tightly into bookcases, it became clear almost immediately that Arthur Sylvester’s status as an emeritus professor at UCSB hasn’t stopped him from teaching.

Since his retirement, the geology professor has been researching and leading student tours all throughout Southern California. Among other projects he has been working on, last month he published his book Roadside Geology of Southern California. Complete with well over 300 color illustrations, the book fits the last piece into the puzzle of Californian roadside geology.

This book has been long in the making. Back in 1972, the publishers asked Sylvester to write it, but he refused.

“We’ve learned so much about Southern California and how it’s been put together geologically since 1972 that if a book had been written in 1972, it would be completely obsolete now,” Sylvester said.

In the past 20 years there has been significant development in the understanding of geologic principals, primarily due to advancements in radiometric age-dating technology.

Radiometric age dating measures the decay of radioactive elements trapped within the minerals of rocks. When our solar system formed, radioactive elements were pulled into the earth along with all the material that forms the ground we walk on. These isotopes — a term describing the specific “variety” of elements — are unstable, and as time goes on they “decay,” falling into a more stable state.

The proportion of decayed isotopes to the original isotopes acts as a “clock” and allows researchers to measure time because the more decayed isotopes there are within the rock the more time has passed. Each isotope has a different rate of decay, which allows researchers to date a wide variety of rocks. For the older ones, the isotopes would decay from potassium down to argon. The more recently formed rocks (50,000 years old or younger) are dated using carbon-14 levels.

This technology is not new; we’ve been able to tell the ages of rocks since the 1950s, but technology is making it easier to get more specific time points. Knowing more exact rock ages provides a more stable foundation for further research.

“The machines are getting better so that you can narrow down the ranges of the ages much more. We can say this is, for example, 117 million years old plus or minus 30 million, you see, whereas before we could only say ‘well … it’s Cretaceous’. Well, Cretaceous is a big huge lump of geologic time. But we can come a lot closer than that now,” Sylvester said.

In the early stages of his book, Sylvester struggled to make the writing accessible to people driving through the area since he was accustomed to giving tours and observing the rocks. To provide more exact information, he utilized geo-referencing while writing so that the reader can know the exact geographical coordinates of each area. Now the book provides information useful for all ages and activities, from advice on a nice place for a family picnic to a source of educational material for a school fieldtrip.

Southern California’s landscape has been ruptured, crunched, folded, recycled and ground up against itself for so long that the variety of age and type of rocks is immense — a geologist’s playground. The increased precision of radioactive age dating allows scientists to track the movements and creation of the land more closely. Sylvester mentioned that a researcher in UCSB’s geology department is now able to determine the age of volcanic rock in the Mojave Desert within 100 years of the actual age — a miniscule amount of time in the scheme of Earth’s history, or as Sylvester admired, “That’s just a lifetime, is what that is.”

A version of this story appeared on p. 14 of the Thursday, March 3, 2016 print edition of the Daily Nexus.