The Daily Nexus
Spoken Word and Poetry
Dope Metaphors in the Hub
March 3, 2016 at 4:35 pm by Allie Graydon 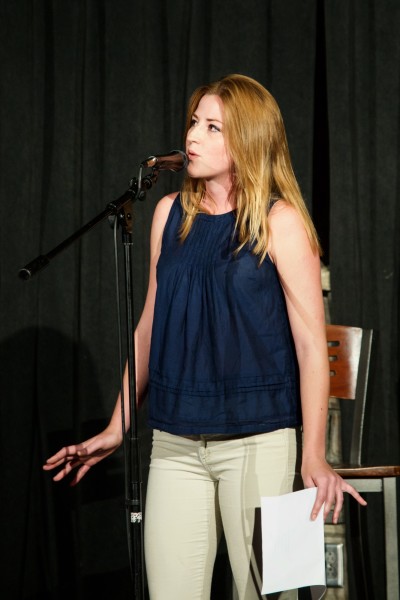 Amidst the bittersweet aroma of coffee and the jarring red lights that shone through the dark room, Samuel Crane stepped onto the stage with a friendly smile and a confident air. The crowded tables and chattering voices suddenly hushed and heads turned to see the poet lean into the microphone. There was a pause. “2016,” he began, kicking off the night of poetry and art with his own poem fresh with modern issues.

The Hub was filled with poetry of all kinds on Sunday night as UCSB’s Poet’s Club members performed their pieces in a showcase called Dope Metaphors. 14 different poets presented 20 poems with subjects and topics ranging from appreciating the little moments to existential questions about life to social issues happening right now. The event was also a showcase for a few musicians who performed during occasional breaks from the poetry lineup.

According to one of the club’s lead poets, Francis Cunningham, The Poet’s Club came from a class called Poetics of Struggle intended to teach students more about the meaning and place of poetry in society. The class also introduced students to spoken word poetry. Cunningham was inspired after taking the class, stating, “Because the class was being discontinued, I kind of decided, you know, I want to continue this. So we started the Poet’s Club.”

The club focuses on group discussions and providing members an outlet for their writing. Cunningham explained, “We present writing exercises, we encourage people to perform, we hold open mics … Our mantra is that we want to build radical imaginations.” Dope Metaphors was created to provide another opportunity for members of the Poet’s Club to showcase their art. Another lead poet from the club, Samuel Crane, elaborated, “We try to do one of these every quarter. The first one we did was Fall, so we kind of learned a lot of lessons … we tried to get it together pretty early this time around.”

Many of the students who performed used their poetry to recount events or feelings from their personal lives. Francis Cunningham, or “F” when onstage, elicited hums of sympathy and snaps of approval during his piece called “Daddy Issues.” His simple smile at the beginning of the poem quickly turned to a pained look and shaking hands as he described the challenges of connecting with one’s father.

Jackie Caldwell also drew from her own experiences in her poem “Blue Shirt.” With vivid imagery of sunny Santa Barbara days and time spent with her family, Caldwell emphasized an appreciation for the little things in life, like a favorite blue shirt. “I love images poetry,” Caldwell said of her inspirations. “I really like nature. I really like incorporating nature into my poems.”

Other students focused on social and political issues through their rhymes and rhythms. Carlos Ortega took the stage with his hoodie up in response to the stigma that hoodies are associated with gang culture. His poem “Untitled” commented on the unfair treatment of racial minorities in society; his loud spontaneous exclamations of frustration jolted the audience.

Subject was not the only important aspect of the poetry on display, however. Jason Chun captured the attention of the audience with his stylized delivery. In both of his pieces, Chun spoke in a low dramatic voice, slowly stretching out his arms and staring intently at the audience to match the unsettling dark themes of his poems. “My favorite poet by far is T.S. Eliot, who wrote ‘The Love Song of J. Alfred Prufrock,’” Chun declared, “And I think there’s a little bit of that poem in everything I write.”

The musical aspect of the event provided an artistic form of expression as well, allowing musicians to showcase their own talent. Soline Daury created a calming atmosphere perfect for a mellow café with her gentle guitar strumming and her soft, high voice. Her friendly persona inspired audience members to sing along during one of her songs.

Matt Caracciolo, another musician at the event, filled the room with his high belt and his upbeat tempo. When asked about his performance, Matt responded, “The song I performed up there was very I.V. influenced, like the riots and stuff a couple years ago.”

This quarter’s Dope Metaphors provided a unique outlet for artists of all kinds to unleash their creativity and develop their skills as performers. With music, spoken-word, rhymes and rhythm, the Poet’s Club and the guest musicians proved that poetry can be found in just about anything.