The Daily Nexus
Science & Tech
Cloudy With a Chance of Monsoons
March 3, 2016 at 6:00 am by Daniela Garcia 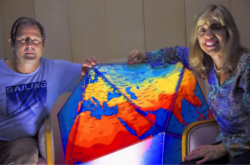 Recently, there has been a rise in debates and information regarding intense weather events. Californians are not the only ones experiencing both extreme drought and dangerous flooding; there has been an increase of extreme weather events all around the world that have been fueled by the changing climate. Scientists Leila Carvalho and Charles Jones, Ph.D., researchers at the Earth Research Institute and professors in the Department of Geography here at UC Santa Barbara, studied the link between climate change and monsoons, a seasonal change in wind direction that is very sensitive to changes in climate. The scientists edited The Monsoons and Climate Change, a book that examines how human-induced climate change affects monsoon variability around the world as well as the resulting impacts these systems have on affected communities. Although monsoons occur on every continent except for Antarctica, the book focuses on the variability in monsoon systems specifically in Australia, Africa, North and South America and South Asia.

In order for a monsoon to occur, there has to be a large difference in temperature between the continent and the surrounding ocean. When the rainy season begins, the land is much warmer than the ocean, so it sucks up the moist air above the oceans, and once it reaches the land, the moisture rises and then condenses, falling as rain. If the land is colder than the ocean, then dry air will flow out from the land and over the water to initiate the dry season. The seasonal winds determine the wet and dry seasons in most of India and Southeast Asia.

Carvalho and Jones studied the history of monsoon variations in order to compare data with reviews and assessments from the Intergovernmental Panel on Climate Change (IPCC), an international organization that provides information on the latest news on climate change. Their book explains that monsoon systems are increasing in strength resulting in heavy precipitation in subtropical regions, which are affected by atmospheric circulation and subsequently causing intense dry weather conditions for eastern South America.

The monsoon model still presents complications, as areas of high topography reveal uncertainties in factors such as clouds and precipitation. Carvalho and Jones determined that one major factor for the change in monsoon systems is increased warming in monsoon regions.

Human-induced climate change and increased pollution fueling irregular patterns of warming and cooling pose adversities for the areas that heavily depend on the winter or summer monsoons for their agricultural practices; the impacts on these communities can be devastating.

Monsoons are highly complex systems that have been researched for decades. Although there have been many advances in our understanding of the mechanisms that drive and affect them, there are still many aspects that need further research. Carvalho and Jones have looked at how our warming earth has affected the monsoon systems, and future research will need to address how this continued warming would exacerbate monsoons.

A version of this story appeared on p. 14 of the Thursday, March 3, 2016 print edition of the Daily Nexus.