The UC Santa Barbara softball team hosted its first regular season tournament this weekend, the Gaucho Classic I, concluding the weekend with four spectacular wins and taking just 1 loss, highlighted by starting pitcher Ashley Ludlow’s no-hitter on Saturday. After taking on the South Carolina Gamecocks, the Georgia Tech Yellow Jackets, and the Southern Utah Thunderbirds, the Gauchos improved to 8-7 overall. 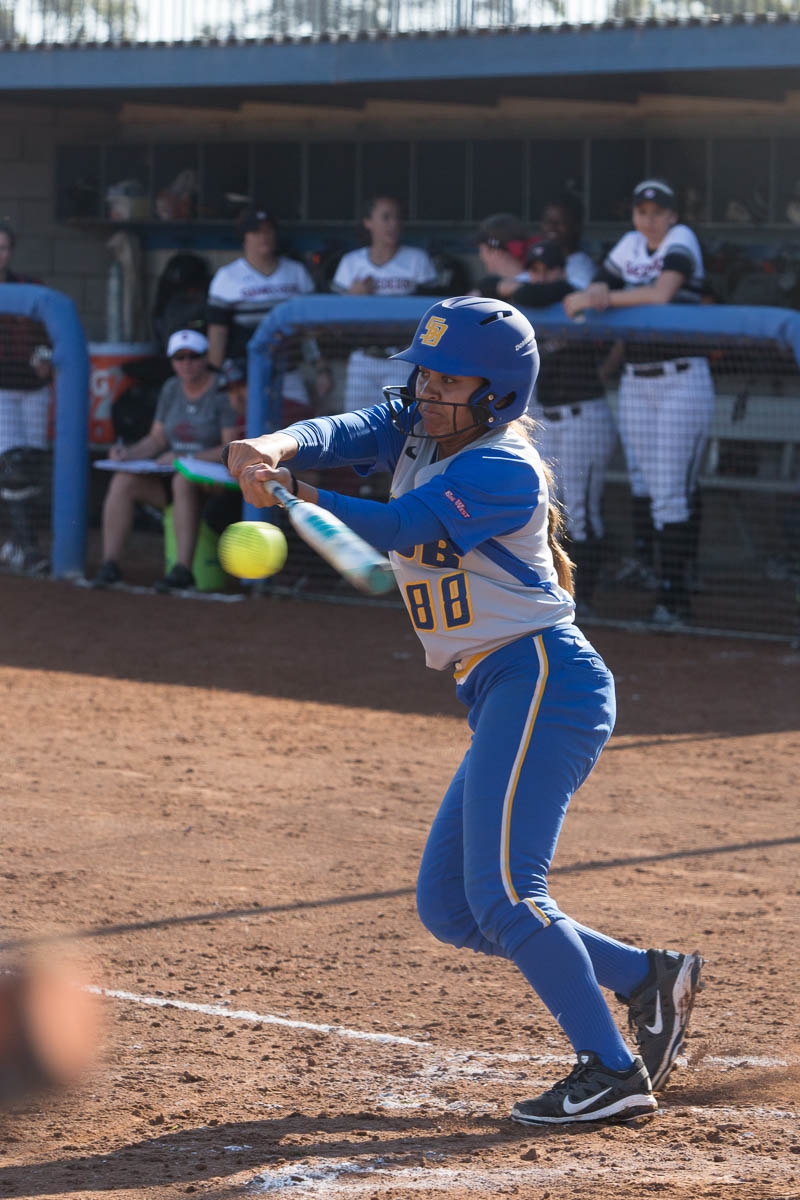 In their first game on Friday against South Carolina, the Gauchos scored four runs in the bottom of the seventh inning to pull out a phenomenal 4-3 win. Down 3-0, heading into the seventh, UCSB mounted a spectacular rally. With 2 outs and 2 runners on-base, senior second baseman Arianna Palomares lined a single to right field knocking in two runs.

After a walk of sophomore outfielder Jessica Johnston loaded the bases, freshman infielder Sierra Altmeyer was also walked to bring in the Gauchos’ third run of the inning. Third baseman Emily Brucelas then singled up the middle to knock in Palomares for the game winner.

In Saturday’s matchup against the Gamecocks, the Gauchos suffered a tough defeat, losing 6-1.  In the game, South Carolina scored early and often, recording five runs in the first two innings.

Gamecock freshman outfielder Kennedy Clark led the way with a home run, three RBI’s and a run scored. Junior starting pitcher Jessica Elliot pitched a complete game to earn her seventh win of the season against no defeats. The Gauchos had eight hits in the game but were unable to string them together for runs.

In its second game on Saturday against Georgia Tech, Gaucho starter Ashley Ludlow threw a complete game no-hitter to lead the Gauchos to a 4-0 victory, striking out 11 and walking 2 to pick up her second win of the season. It was the first no-hitter in Ludlow’s stellar collegiate career, and came at a time when her team needed it.

Trying to recover from the tough loss against South Carolina earlier in the day, the Gauchos started fast with a quick run in the first inning. Clark led off with a single.

After Yellow Jacket starting pitcher Jenna Goodrich loaded the bases with a pair of walks, UCSB junior outfielder Jaqueline Hinojosa brought home Clark with a solid single The Gauchos went on to score another run in the second and two more in the fourth.

The first game against Georgia Tech on Friday was another comeback win for UCSB. The Gauchos found themselves down early partly due to two self-inflicted errors. Down 3-0 in the third, the Gauchos abruptly turned things around by scoring two runs on four straight singles to trim their deficit to 3-2.

It remained a one run game until the sixth inning when the Gauchos pulled ahead for the victory. UCSB scored two more runs in the inning, sparked by a Jessica Johnston RBI single into center field scoring freshman infielder Melanie Menor.

The Gauchos finished its weekend with a solid 10-2 win over Southern Utah on Sunday afternoon led by rightfielder Jessica Johnston’s outstanding day at the plate going 4-4 with three RBI’s and three runs scored.

Taking advantage of the Thunderbird’s weak pitching, the Gauchos scored 4 in the first inning highlighted by Johnston’s clutch single which sent home Clark and Palomares for the first 2 runs. The Gauchos ended the game in the 6th under the mercy-rule when Jessica Tetzlaff singled in Hinojosain to score the final run .

The powerful arm of freshman pitcher Veronika Gulvin proved too much for the Thunderbirds on Sunday, as she took the win with a six inning complete game effort. Gulvin allowed just two runs on five hits, while tying her season best with six strikeouts.

“There are a lot of better hitters at the college level, so I need to focus more and work harder towards hitting those right spots. But altogether, our offense as a whole is looking like we are off to a good start,” said Gulvin.

The Gauchos played well at home this weekend, having a successful tournament picking up four wins against just one loss, highlighted by Ashley Ludlow’s first career no-hitter on Saturday.

UCSB will attempt to keep its momentum going into next week as the Gauchos will travel to Northridge to play in the Stacy Winseberg Invitational.