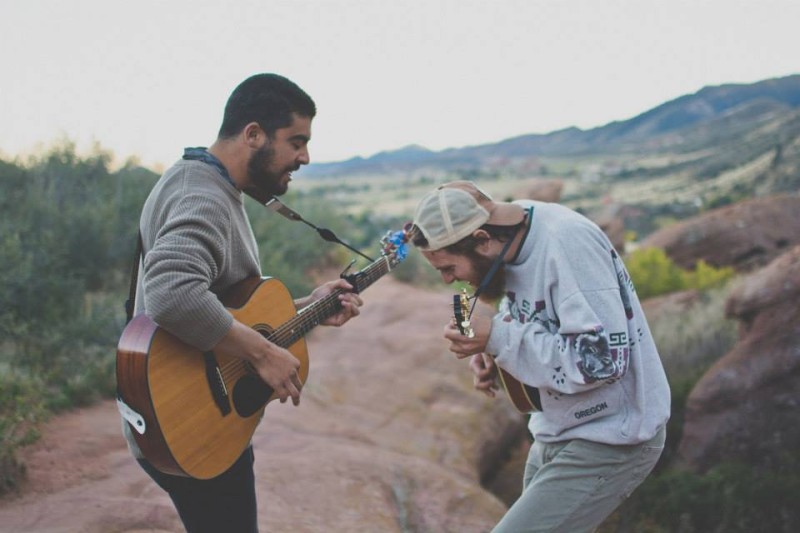 In a world where everyone and their brother wants to be a DJ, and a handful of kids from your high school are still trying to make it as rappers, it’s nice to remind yourself that folk music isn’t just something that exists in your midwestern grandpa’s record collection. On Tuesday, March 1, Odell Fox is coming to SOhO in the second-to-last leg of their first tour ever. At 7:30 p.m., you can witness Raphael Odell Shapiro and Jenner Snow Fox soothe the soul and convince your parents that not all of our generation’s music is trash.

Shapiro and Fox share a love for acoustic singing-songwriting, the great outdoors and “the next great American sport,” Spikeball. Moreover, as recent college graduates, they share the experience of stumbling out into the big bad world and giving it a go. Conveniently for us Gauchos, they have worked their newfound knowledge into their first EP, Moon Shiner, a bluegrass-based, Americana armada of passionate tunes. With songs like “Waiting Game,” and “One at a Time,” they reflect on the shared dream of many twentysomethings that are abandoning the sedentary nine-to-five “successful” waiting game to welcome the struggles of following their passions and taking each step one at a time.

The two met at Yale, where Fox was recruited to play collegiate soccer and Shapiro was recruited for musical theatre. The two eventually crossed paths in the Yale folk roots chorus, Tangled Up In Blue, where they toured together for three years and then went their separate ways. Shapiro began touring in an a capella group, the Yale Whiffenpoofs, and then graduated with the most folk-favoring degree a college boy can get: American Studies, focusing on cultural history and American storytelling. Fox graduated with the most scientific music degree possible: Cognitive Science, focusing on music and the mind. Shaprio moved to New York to make it big as an actor and Fox moved back to Oregon to work in the family business as a river tour guide. They each released their own solo album and something must’ve clicked because in less than year they decided to relive their days as Yale boys. In their unique case, this meant making folk music.

Just last winter, they got serious about their whole “dropping everything and making it as a musician” thing and moved in together in Palo Alto at Jenner’s parents house. This move-in was temporary, as they almost immediately began touring together up and down the West Coast, ultimately bringing them to the upcoming show in downtown Santa Barbara next Tuesday.

If it’s a huge concert with thousands of people packed in, screaming the lyrics you want, this is not the show for you. If it’s a simple, steel-string symphony played by two bearded guys in an intimate setting, this show will be everything you want and then some.