The Daily Nexus
Sports
Sisterly Ties: From the Court to the Heart
February 25, 2016 at 5:10 am by Sean White

Whether we admit it or not, we’ve all had that older relative whom we held a friendly envy toward in our childhood. For all of us, there’s always been that brother, sister or cousin that we’ve so greatly admired but desired to be better than at the same time. 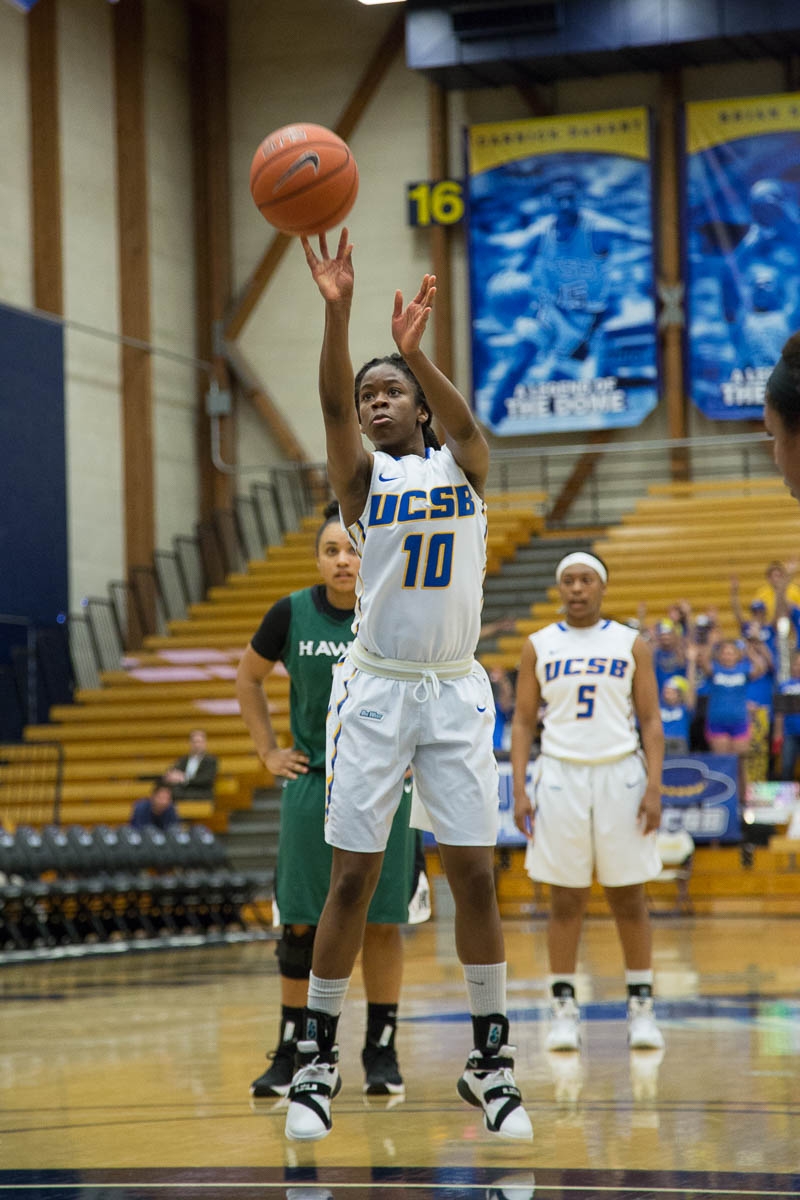 Once the challenges of newfound independence approach our youthful lives, it has been the experiences — good or bad — of these older relatives that have been most significant in our own upbringings.
In the life of UCSB women’s basketball junior point guard Onome Jemerigbe, it has been her older sister, Afure Jemerigbe, alongside her unbreakable bond of family that has groomed her into the person she has become.

From Stockton, CA and a former student and women’s basketball player at St. Mary’s High School, Onome is the youngest of four siblings, all of which attended St. Mary’s as well.

“At times, I would say the oldest kind of got the benefit of the doubt,” Onome said. “As the youngest child, I had to work for more things. But it’s great having multiple siblings. I’ve always loved the fact that there’s always multiple people to talk to; it’s like having three best friends.”

Of those three best friends, the relationship with her only sister, Afure, developed into a relatability beyond the ties of lineage, for it also revolved on the basketball court.

“She’s [Afure] definitely one of the biggest influences I have as a person and for the reasons why I play basketball,” Onome explained. “She started off playing basketball when she was young. Me being the youngest, I always kind of copied my older siblings, so I kind of followed her into it. Her love for the game influenced me to even try out for basketball.”

Undoubtedly, Afure’s love for the game of basketball didn’t develop without the persistence of a valiant effort that was committed to improving everyday. Nonetheless, Onome served as a constant reminder in ensuring Afure displayed her best at all times.

“I have always had an incredible love for the game. It was that love that made playing basketball so much fun for me,” Afure said. “I truly believe that Onome plays the way that she does, with so much heart and passion because she too has this love for the sport.”

Afure attended and played basketball for St. Mary’s High School from 2006-2010. She ranked No. 15 on ESPN HoopGurlz 100 list during her senior year and was a 2010 McDonald’s All-American.

When Afure was a senior at St. Mary’s, Onome was a freshman. While it was one of the few opportunities for the two to play together, Afure made sure to cherish her last year both being around and playing with her sister.

“When baby sis played with me for a year during her freshman year in high school, my senior year, I loved it,” she said. “I could watch over her. Make sure she was doing her homework especially on the road games. She was the point guard and could see things from a perspective that I couldn’t, and as a wing guard and an experienced athlete, I could see things that she couldn’t. We have always had such a fun, goofy and close sister to sister relationship. I consider her to be my best friend. I want her to always be the best person that she can be, and I knew that it in order for her to be that, that it started with me. It started with me because I am her older sister and she looked up to me. We were always around each other.”

Yet their time together would end with Afure attending and playing basketball at the University of California, Berkeley. After graduating in 2014, she played one season overseas in Spain for Al-Qazeres women’s basketball team.

It is through these experiences in which Afure has been able to help guide Onome throughout her career. Specifically, helping enhance Onome’s capabilities both on and off the court is most paramount.

“From playing at Cal and then going to play overseas, I learned the importance of good character. Character is what is deep inside us; it’s who we are on a daily basis, when things go well and when things go wrong,” Afure said. “It’s who we are in the locker room, on the court as well as in the classroom. We have reason to be proud when both reputation and character are a mirror image of each other.”

As Onome was in her first year at UCSB, Afure was a senior preparing to conclude her collegiate career at Cal. Although the two sisters were members of opposing programs, Afure helped integrate Onome into the duties and responsibilities of being a collegiate student-athlete.

“A lot of the stuff she [Afure] went through has helped me to become a better player,” Onome said. “I’m not the perfect player, but I’ve definitely grown because of her. She explained what she should have done, all the mistakes she made. It helps me to not make the same mistakes.”

Currently in her third year at UCSB as the floor general for the Gauchos’ women’s basketball team, Onome has had an immediate impact on the court since her arrival. Thus far, she has started in 79 of 86 career games played, having started all 29 games her sophomore season.

Her performance through the years has resulted in her being named to the 2013-14 All-Big West Freshman Team, and she was an Honorable Mention All-Big West recipient last season.

So far this year, Onome has excelled since the start of the Big West Conference schedule, leading the conference in assists per game with a 5.4 average while ranking second in steals per game with 2.1.

She also set career-highs in scoring with 20 points at UC Davis and 11 assists versus Cal State Fullerton.

While her individual accolades do not surpass the team’s long-term goals and the role she plays in them, Onome accredits her maturation as a person to her production on the court.

“Freshman year, I was easily bothered,” she said. “Not to say that I don’t get bothered every once in a while, but I’ve definitely grown in the mental part of basketball. Just being able to control my emotions and make sure I give my all every time despite if I have turnovers or if we weren’t being successful as a team.”

While Onome continues to impress on the court and owes much appreciation to Afure for inspiring her love of the game in addition to providing advice on life as a collegiate student-athlete, true inspiration for both sisters begins with their mother. An immigrant from Nigeria who persevered and raised four children, Onome acknowledges her mother as the constant reminder to continue to work hard each day.

“My mother keeps me balanced, keeps my head straight,” Onome said. “She always seems to know what to say to get me back on track.”

It has been the existence of this family foundation that has contributed to the person Onome is both on and off the court. According to her, the core to this foundation originates with one word: loyalty.

Afure has epitomized this essence of loyalty all along, and is now just attempting to replicate the same support system that was provided to her.

“Home is where heart is. Family is the epicenter of all reasons. Family to me is root of my very existence,” she said. “Without family we wouldn’t be the people that we are today.”

While basketball helped to further establish the relationship between sisters Onome and Afure, it never defined their bond.

Once the shot clock hits zero and it’s time to hand in your jersey, the temporary reality of basketball is realized, but family is forever.

A version of this article appeared on page 9 of February 25, 2016’s print edition of the Daily Nexus.