The Daily Nexus
Water Polo
No. 17 Gauchos Prepare for UCI Invitational this Weekend
February 25, 2016 at 5:05 am by Sinead Leon

After a tough couple of losses at the Triton Invitational, the No. 17 UCSB women’s water polo returns to action this weekend at the UC Irvine Invitational and will attempt to break its three-match losing streak.

The Gauchos hope to improve their overall record of 7-6 thus far in the 2016 season and have had a week off, not competing since its 15-11 loss to No. 14 LMU in the Triton Invitational on Feb. 14.

“The win to secure TOP 8 at the Triton Invite was a team goal and happy to accomplish it,” Head Coach Serela Kay said.  “We played ASU to 1 goal, and had the opportunity to secure the win against UCSD up 7-5 with 2:00 left in the game.” 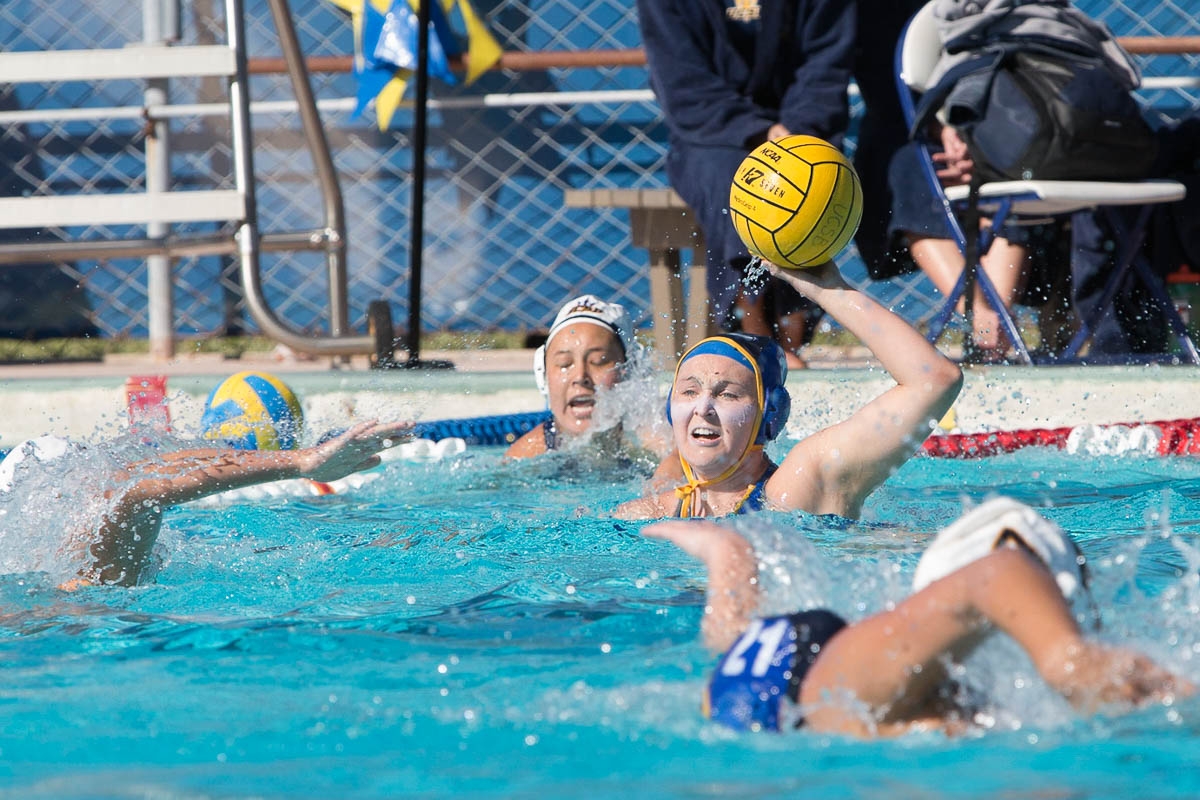 After calling to a teammate, Bryn Hudson throws her the ball. Dustin Harris/Daily Nexus

Santa Barbara ended its visit to San Diego with a win over No. 22 Marist College, but were defeated by No. 7 Arizona State, No. 14 Loyola Marymount University and No. 13 UC San Diego.

Despite UCSB’s subpar 1-3 finish, there were some individual standout performances throughout the team’s two days of competition.

On opening day of the invitational, the Gauchos were led by redshirt senior center Lauren Martin who put away four goals, including a hat trick against the Red Foxes. The Fresno native shot 3-4 to sustain a .581 shooting percentage this season.

On the defensive side, junior utility Taylor Shore was active in stealing the ball, collecting seven on the day— three of which were against the Sun Devils. Complementing Shore was senior goalkeeper Mackenzie Brokaw who had nine saves in total and three steals per game.

However, it was senior attacker Bryn Hudson who took the second day of the invitational with her outstanding work in the pool, finding the back of the net for a combined seven goals, including a team-high of four goals against the Tritons. She also went on to contribute five assists in the second game of the day against LMU.

“Bryn Hudson is tough as nails,” Coach Kay said. “She [Hudson] plays with the same mental toughness no matter who the opponent.  She will continue to make an impact not only as a playmaker but also as a scorer.”

Brokaw on her part had 12 saves in the first match to go along with two steals. She tallied six saves and a steal in the second contest, but it was not enough to lead the Gauchos to victory as they dropped both games on Sunday.

With that behind them, the Gauchos will now focus on what is to come this weekend. There are a total of 16 teams participating, which are divided into four separate groups. Santa Barbara is placed in “Group C” along with tough competitors such as No. 3 Cal, No.6 Hawaii, No.12 Pacific.

The first matchup for UCSB will be Saturday morning against No. 3 Cal. The Bears are 13-1 overall after their solid performance at the UC Davis Invitational in which they defeated No. 12 Pacific and Brown University. Cal will look to extend its current nine-match winning streak.

The Gauchos faced the Bears earlier this season in an intense game that went into overtime. A goal by sophomore driver Carla Carrega in the last seven seconds of the match clinched the Bears’ second chance, forcing the game into its extra period. It was in overtime where Cal finished the game to defeat Santa Barbara by a score of 9-8.

“We have now played 4 OT games so far this season and I believe if we are resilient these games will teach lessons in big moments come Big West Championship time,” Coach Kay said. “This is what we have been focusing on to prepare for this coming weekend where every game in the tournament will be a fight to the final buzzer.”

The biggest threat to the Gauchos will once again be Carrega, who is responsible for most of the Golden Bears’ scoring so far this season. The sophomore currently ranks third in the MPSF in scoring, averaging 2.21 goals per game and is second in total goals scored with 31.

Apart from the sophomore driver, providing the Bears with productive play are Dora Antal and Anna Illes, who will both participate in the 2016 Summer Olympics in Rio de Janeiro, after their outstanding performances with Hungary in the 2016 European Championships last month.

There is no doubt that the UCSB vs. Cal rematch will be an exciting match to watch, and also an important one. The result of the match will dictate who the Gauchos will face in its next match on Sunday, Feb. 28.