The Daily Nexus
Opinion
Asian Americans: The Precarious Position of the ‘Model Minority’
February 25, 2016 at 5:00 am by Amy Koo 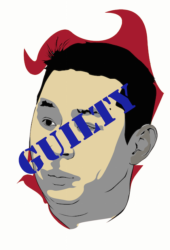 This past weekend, thousands of protestors swarmed the streets of L.A. to show support for NYPD officer Peter Liang, who was recently charged with second-degree manslaughter in the November 2014 murder of Akai Gurney, an unarmed black man. My community, the Asian-American community, turned up in droves to protest Liang’s conviction, pointing to the plethora of white police officers who have faced no legal consequences for police brutality. Daniel Pantaleo, who killed Eric Garner in an illegal chokehold in July 2014. Darren Wilson, who shot and killed Michael Brown in August 2014. Timothy Loehmann, who shot and killed Tamir Rice in November 2014.

On the surface, it does seem like an act of injustice. Liang discharged his weapon in a dark stairwell, and his bullet ricocheted off a wall before fatally hitting Gurney. Paralleled with the video evidence we’ve seen throughout the last several years documenting targeted police aggression against unarmed black men, it seems like his conviction is the epitome of white privilege corrupting the system we all coexist in.

The Asian-American community in the United States is in a precarious situation. We’re still a minority community who has suffered a history of discrimination and persecution. From the Chinese Exclusionary Act of 1882 to the relocation of Japanese-Americans to internment camps during WWII to Vincent Chin’s murder in 1982, every Asian-American feels the burden of being a minority, of being “other.”

We, however, also bear the badge of being the current “model minority:” a minority who rises above systematic oppression and works hard to belay the odds against us. In the 1800s, we were in the place of other minorities, labeled “job-stealers” and “coolies,” with the government limiting our immigration and, for a time, completely stopping immigration from China and Mongolia.

It’s in this dichotomy that I see the problems of the Asian-American community arise. This past weekend highlighted our problems as a community. As the current model minority, there’s a sense of injustice that we don’t benefit from all the aspects of white privilege. Liang’s conviction is a reminder that no matter how clean our image is and how much the media compliments our work ethic, we will never be at the top of the food chain.

The protests this weekend were also a slight to the other minorities we should be supporting. Regardless of your opinion of the prosecution of police officers for murder, Liang shot and killed Akai Gurney, who was unarmed. He’s another police officer in the corrupted system that promotes and accepts police brutality against minorities, particularly the black community. There’s room to argue that Liang’s conviction is another case where a minority was scapegoated to protect the status quo, but the problem is not that of Liang’s conviction, it’s that rules aren’t thoroughly and consistently enforced for police officers across the country. Rather than calling attention to the perceived injustice of Liang’s conviction, the Asian-American community should be calling for police officers like Daniel Pantaleo, Darren Wilson and Timothy Loehmann to face the consequences of their actions like Liang will.

After the events of this weekend, I feel that the Asian-American community has forgotten where we should stand. We are better than the stereotyped racist caricatures other people see us as. By not supporting other minorities’ struggles, we push ourselves into a corner where we will not only be systematically oppressed, but looked upon disdainfully by other minorities. Our struggles, our issues aren’t limited to the Asian-American community. Instead of standing behind Liang, we should acknowledge his wrongdoing and fight for other police officers to be convicted for murder.

As a minority, we should fight alongside other minorities to disassemble the system that is rampant with prejudice and discrimination, rather than seek privileges and promote the system of racial equality. By fighting for Liang, we forget our roots as a community and we promote the racial inequality among minorities, and forget what we’re all fighting against.
Amy Koo hopes Asian Americans realize solidarity in the wake of the charges against NYPD officer Peter Liang.

The DOJ, under Eric Holder at the time, would have liked nothing more than to prosecute Darren Wilson for the shooting of Michael Brown. Instead of blindly believing the “hands up” narrative, please take some time to read the official detailed DOJ report on what transpired that fateful day in Ferguson. It includes actual evidence rather than a fabricated narrative.

After Holder initially did nothing to pump the brakes on the initial “hands up” narrative (the main rallying cry of BLM), after the official DOJ report was released (see above), he disingenuously said this” “It remains not only valid – but essential – to question how such a strong alternative version of events was able to take hold so swiftly, and be accepted so readily.” Of course, the media didn’t widely report on the DOJ findings and thus did a great disservice to the public and to the truth. I also don’t imagine that many ethnic studies professors are keen… Read more »

Come on, Amy, I’d love to hear you make a case for prosecuting Darren Wilson in light of the DOJ investigation. You don’t need to be a lawyer…. just look at the outlined evidence and tell us whether Wilson reacted reasonably or if he acted criminally or even negligently.

Also, the chokehold on Garner was not “an illegal chokehold” as you claim. Yes, it was banned as a practice by the NYPD and was excessive force given the situation, but a chokehold itself is not illegal.

In my article, I didn’t make the case that Darren Wilson was inexcusably guilty. As the DOJ report says, he may have been well within his rights. However, Darren Wilson was not indicted for a trial. As much as I personally feel that our legal system fails us in some aspects, Darren Wilson, by shooting and killing an unarmed man, should have been tried for his murder. I believe that any police officer that has killed an unarmed person or been accused or documented exhibiting excessive force should be tried. It’s not up to me to decide whether Darren Wilson… Read more »

I’m no lawyer, but it’s clear to me that you’re lacking in some basic legal and moral concepts. The fact that one is merely unarmed when killed does not mean they were not a threat to inflict severe bodily harm. Keep in mind these facts… Michael Brown had just committed (and Wilson strongly suspected Brown) a strong arm robbery. Brown was 6’4″ and weighed 300 pounds. He had just assaulted a police officer in the officer’s patrol vehicle. He advanced on the officer after all of this, and if you believe Wilson’s account, he had already gone for his gun… Read more »

“every Asian-American feels the burden of being a minority, of being “other.””

I’m not so sure every Asian-American feels the burden you’re projecting onto them.

The opinion section seems more and more populated with victim narratives every day, where the collection of “opinions” are more streamlined and established than the london philharmoic (save the occasional garshfeld article). Let’s just add a “grievance” section and get on with it…

“As the current model minority, there’s a sense of injustice that we don’t benefit from all the aspects of white privilege.” That’s not true. The Asian American community is protesting because they want to make sure Peter Liang is sentenced appropriately for his actions, not that he becomes the scapegoat and is sentenced harshly to appease the Black community.

Asians are absolutely beneficiaries of not only white privilege, but an even higher privilege as well. For every dollar that Asians make, only 75 cents are made by non-Asians. That includes white people, the epitome of privilege. Asians are disproportionately richer, have longer life spans, disproportionately represented in business, industry, universities, and graduation rates, and despite all this, have their culture celebrated as an exotic and rich “minority” one despite the fact that they are privileged. They are also disproportionately represented in STEM and politics, have lower poverty rates, and end up in prison at an even lower rate than… Read more »

The upper 1% of society is a minority (incidentally most of them are Asian-Americans) yet nobody but backwards conservative bigots and self-serving libertarian sociopaths would insinuate that they’re oppressed. That’s basically what you’re doing here, and seeing you do it under the banner of progressivism sickens me. Your comment about the low status of South-East Asian immigrant population is mirrored by the racist and reactionary rhetoric on the right who point to exceptions like Nigerian black immigrants and Saudi Arab immigrants who are richer than the rest of the POC population, and claim that this is evidence that blacks and… Read more »

Daaaaamn…. hittin girl with the facts

Most of the pervious message can be summarized with
Only my oppression is real oppression, only my pain is real and because you do not know my pain you don’t know pain at all. ONLY MY EXPERIENCE IS VALID and f u for expressing your experience which is different than mine.
I like your white washing of other minority experiences and discounting them.

I like how you ignored my explanation of why Asians are NOT a minority and shouldn’t be trying to buy their way into the “oppression olympics.”

Hi Dark Mirror, Once again, I use the word “minority” strictly in the sense that Asians only make up 5.6% of the US population. The definition of “Person of Color” is a person who is not white or of European parentage. I find it worrisome that you would postulate that Asian-Americans are not people of color and are essentially white or white-passing, because that is a steep generalization, and quite frankly, in the real world, not valid at all. You can argue that we aren’t discriminated against in the same way, but to assert that Asian-Americans are essentially white is… Read more »

The dark mirror hopes that hate will lead to revolution, and it may. But the revolution incited by hate is never a good one.

This is why nobody likes liberals.

Let’s move past the Michael Brown shooting, which was reasonable and justified. Quoting from the DOJ report, “Given that Wilson’s account is corroborated by physical evidence and that his perception of a threat posed by Brown is corroborated by other eyewitnesses… there is no credible evidence that Wilson willfully shot Brown as he was attempting to surrender or was otherwise not posing a threat.” Speaking about officer involved shooting and police use of force in general, you need to be capable of evaluating an officer involved use of force as our legally system does. Let’s look at the California Penal… Read more »

With no disrespect to the Asian-American situation, which is the topic of this article-or any other group, there is another problem on our very campuses that is not being talked about much.

This study is by the AMCHA Initiative founded by two UC professors (UCLA-UCSC).

As a part-time teacher at UC Irvine, I can tell you there is, indeed, a problem and it must be addressed.