The Daily Nexus
Science & Tech
Gravitational Waves Detected As Suggested by Einstein’s Theory of Relativity
February 24, 2016 at 6:00 am by Janani Ravikumar 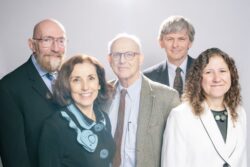 The Laser Interferometer Gravitational-Wave Observatory (LIGO) has successfully recorded the sound of two black holes colliding billions of light years away. A faint rising tone in the recording is the first direct evidence of gravitational waves, or ripples in the fabric of space and time.

According to Caltech, Albert Einstein predicted the existence of gravitational waves in 1916, as part of his general theory of relativity. Einstein hypothesized that massive accelerating objects, like neutron stars or black holes, would disrupt space-time in such a way that it would produce ripples in the process. These ripples would then travel at the speed of light through the universe, carrying information about their origins and the nature of gravity itself.

“Gravitational waves provide a completely new way at looking at the Universe,” Professor Stephen Hawking said in an interview with BBC. “The ability to detect them has the potential to revolutionize astronomy. This discovery is the first detection of a black hole binary system and the first observation of black holes merging.”

LIGO first began focusing on gravitational waves in 2002, but was eventually shut down after eight years without having recorded a single wave. Last September, LIGO armed itself with new technology under a new brand, Advanced LIGO. Today, the observatory consists of two twin tubes called interferometers that meet to form an L-shape. A 180-watt laser beam is split in two where the two tubes meet, and the twin beams that travel down each tube hit an ultra-precise mirror. Then, the beams bounce back about 400 times before meeting again at a light sensor.

The two beams create an interference pattern of bright and dark areas called “fringes” at the light sensor. By analyzing the fringes, scientists can determine changes over time in the distance traveled by the light. Theoretically, if a gravitational wave passes by, then one tube of the observatory will be stretched while the other is squeezed.

LIGO consists of two facilities designed identically — one is located in Livingston, Louisiana while the other is in Hanford, Washington. With such a great distance between the two facilities, scientists can tell if a favorable reaction is simply due to local noise that compromises the measurements — this will only be felt by one detector — or if legitimate gravitational waves are responsible, which should be perceived by both detectors.

This discovery also indicates that two black holes are merging together, U.S. News reports. What we currently know of black holes comes from studying binary systems with black holes of a mass five to 20 times that of the sun. The black holes that LIGO has seen are much larger than expected, sizing up to about 30 times the mass of the sun. In addition to the discovery of gravitational waves, the question of how stars could create such massive black holes will affect the rest of astronomy for a significant period of time.

Though the discovery of gravitational waves confirms Albert Einstein’s final prediction, it marks a beginning rather than an end — the beginning of a new era in astronomy, where we will study the universe through a fundamentally new lens.

This is a great article

They are macro-photon waves nothing more or less…just saying. Anyways, time lines are like egg shell DNA and that which is inside is genetic-probability. Anyway, I have always hated my genetic linear time-line, and that’s all will be said about that. The shell is not optional, however braking the shell will ccollapse…you know what.

“To go where no man has gone before”.

Not true. Experiment only suggests that. It has to be repeated and correlated against real events, not simulations.

When the Sun shines upon Earth, 2 – major Time points are created on opposite sides of Earth – known as Midday and Midnight. Where the 2 major Time forces join, synergy creates 2 new minor Time points we recognize as Sunup and Sundown. The 4-equidistant Time points can be considered as Time Square imprinted upon the circle of Earth. In a single rotation of the Earth sphere, each Time corner point rotates through the other 3-corner Time points, thus creating 16 corners, 96 hours and 4-simultaneous 24-hour Days within a single rotation of Earth – equated to a Higher… Read more »

This article makes me want to go on an insane rant about metaphysics. The spiritual energy of the universe sub particles resonate within the hyper reality of the manifestation of universal consciousness, and the rippling effect of the universal energy shows us the enlightenment of the sub realm!