The Daily Nexus
Tennis
Women’s Tennis Makes It Three Straight With Nearly Flawless Weekend
February 22, 2016 at 11:29 am by Xavier Cardenas 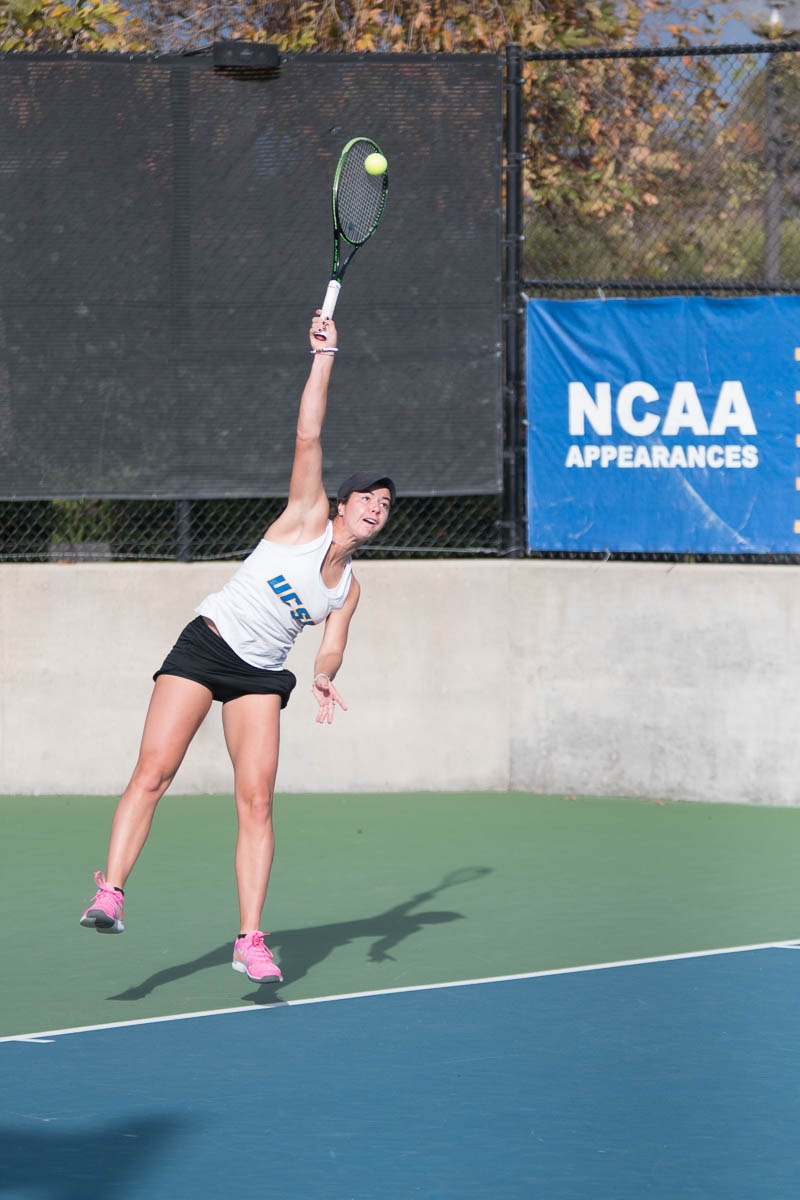 The No. 68 UCSB women’s tennis team picked up its third straight victory over the weekend. Including another shut out performance by defeating Loyola Marymount University to the score of 7-0 and University of San Francisco 6-1.

With the pair of W’s added to the record the Gauchos have improved to an overall record of 4-4 while LMU have fallen to 2-4. USF have continued to struggle by losing another contest leaving them winless in the season thus far.

Santa Barbara beat LMU without much trouble only dropping a single set throughout the entire duration of the competition. UCSB sealed the doubles point with a win by sophomore Lou Adler alongside with fellow sophomore Amanda Atanasson. The duo defeated LMU’s senior Kristine Kouyoumjian and sophomore Anna Romeka 6-3 in a tight contest.

Afterwards in singles competition the Gauchos defeated the Lions under three sets in every facet of singles play, with the exception of the Adler and Kouyoumjian contest that went to the third set.

Leading the way for UCSB was sophomore Lou Adler who was responsible for three match points this past weekend, winning in two singles competitions and as one half of a winning combination in doubles competition

Following the doubles contest, Adler continued her winning performance by defeating the senior lion Kristine Kouyoumjian in single’s competition in three. Although Adler lost the first set 3-6, she came back to serve a double bagel, winning the next two sets 6-0.

The next day against the Dons, Adler had a tougher time sealing a match point for UCSB as she went to three sets against junior Thyra Taune in a close matchup. the gaucho dropped the first set 3-6 coming off slow out the gate, she then went on to steal the second set 7-5. The final set went to the sophomore in a 13-11 contest that went back and forth as much as the tennis ball did.

“It was hard because I was down 6/3 5/2 and I won 5 tough games in a row to come back into the match, and it asked me a lot of mental energy,” said UCSB Sophomore Lou Adler. “I knew I had to stay tough, keep playing my game and be very consistent… I always believed I could do it besides the score.”

The rest of the team delivered solid performances as well to ensure the 6-1 win. The Dons defaulted in the number six singles match and the number three slot for doubles giving the Gauchos a point advantage before the first whistle ever blew.

The team from San Francisco did not intend to go down easy as they continued to fight for every point. The first Double’s match went to the Dons as they defeated sophomore Palina Dubavets and junior Jaimee Gilbertson 6-1. However UCSB won the doubles point with quick work by junior Melissa Baker and the freshman from Sydney, Stephanie Yamada, defeating their opposition 6-0. The end of doubles play left Santa Barbara up ahead 2-0.

Sophomore Palina Dubavets lost in a close contest against red shirt senior Andrea Ka from USF going all three sets giving the Dons its only point of the day.

However UCSB still managed to ensure the win and now are 4-4 overall and 1-0 in conference. The Gauchos will  hope to continue to ride out the momentum on the road into next weekends matchup against the University of Oregon and No. 61 Hawaii.