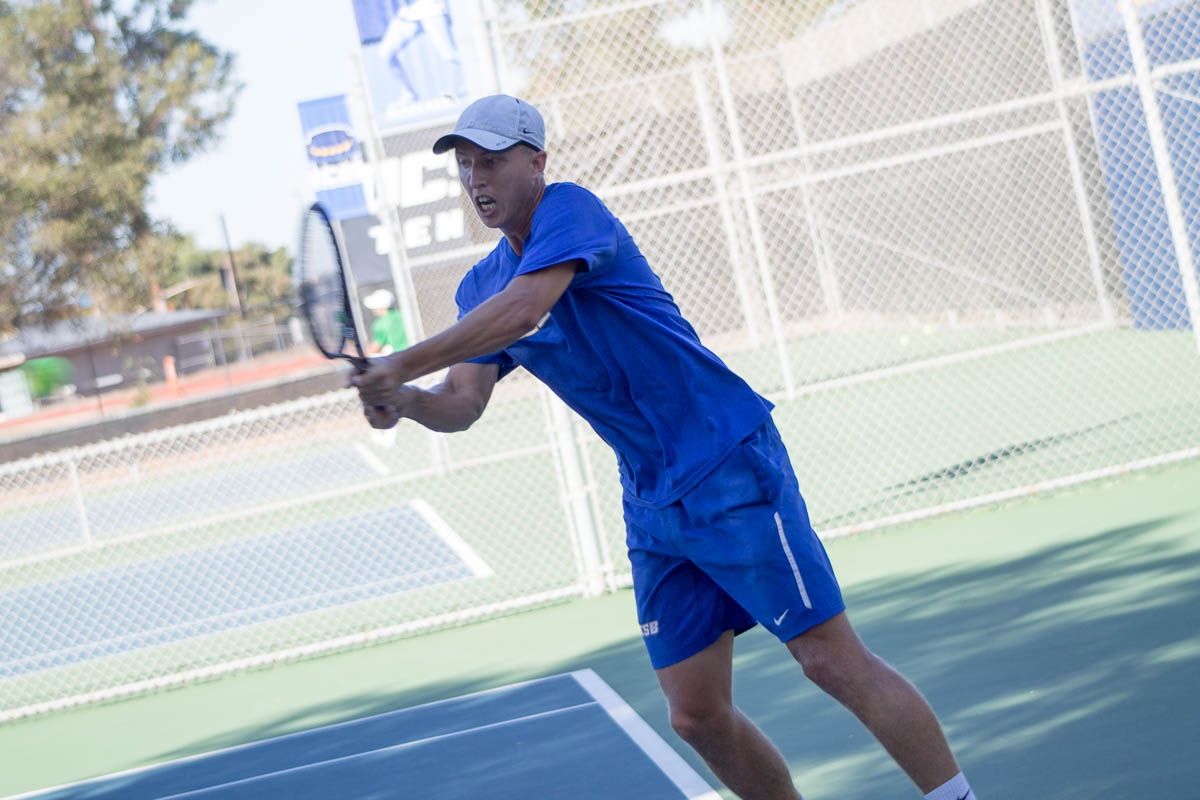 This past Saturday the No. 42 UCSB Men’s Tennis team defeated the No. 38 San Diego State Aztecs behind five singles wins. The Gauchos won their fifth straight match 5-2 despite dropping the doubles point.

“This win showed us that although the doubles point is very important, we can manage some matches even when we don’t get it,” Head Coach Marty Davis said. “We can still win matches when we fall behind 1-0.”

The Gauchos improve to 6-3 on the year and have played all nine matches on the road.

The Aztecs had a great jump out of the gates as they took doubles match wins on courts two and three. Milen Ianakiev and Santiago Cavallos with a 6-1 win on two, set San Diego up for the doubles point and the duo of Hendrik Jebens and Sander Gjoels-Andersen sealed it despite fighting a close battle on three that ended 7-6.

The No. 44 team of seniors Nathan Eshmade and Miles Seemann battled back to what was nearly a victory on court one at 5-4 in their favor, but time expired with the completions of the other matches.

Despite trailing 1-0, Santa Barbara took five of the six singles matches, three of which came in straight sets.

Freshman No. 83 Nicolas Moreno de Alboran was the first off his court at two with a straight set win over Jebens 6-4, 6-4. This win notches the freshman’s sixth straight in dual match play, most of which have also come in sweeps.

Junior captain Morgan Mays finished just a game later on court three topping his opponent in two sets as well. The junior put his team up 2-1 on the board with a 6-4, 6-3 win over Ianakiev.

The Aztecs picked up a sweep of their own on court four to ice the match at 2-2. San Diego’s Marko Goles-Babic had the one answer of the match for the Aztecs as he bested sophomore Cody Rakela 6-3, 6-4.

The Gauchos would be the team to break the tie with another win, this time on court six. Junior Teague Hamilton picked up his first win of the season in his first match defeating Jonas Meinzer 6-4, 7-6(2). With just one more match needed for the win, the Gauchos had freshman Anders Holm and Eshmade playing in third set matches.

Holm sealed the victory for his team finishing his match on court five. The young Gaucho topped Gjoels-Andersen in a best of three 6-2, 2-6, 6-2 to give his team the overall win. Nathan Eshmade added another point for the Gauchos, despite sealing the match victory, as he defeated a ranked opponent in No. 69 Freddy Gelbrich. The senior gave his team a strong final score of 5-2 as he took the last two sets of his match 3-6, 6-4, 6-2.

“It was a tough first set for me, my opponent was getting some very good serves in,” Eshmade said. “I really came back in the second and found my rhythm.”

The Gauchos will carry their five-match win streak into their home opener this weekend. Santa Barbara will host No. 68 Pacific and No. 73 Fresno State.